(RNS) — Six decades ago this month, a bomb severely damaged The Temple, a Reform Jewish congregation on Peachtree Street in my hometown of Atlanta. Though this raw act of anti-Semitism took place years before I was born, the event looms large in my psyche, as it haunts the conscience of Atlanta to this day.

But so, too, does the courageous response of The Temple, the civil rights community and Atlanta civic leaders.

The virulent anti-Semitism that led to the murder of 11 worshippers at a Pittsburgh synagogue this past weekend shares eerie parallels with 1950s Atlanta.

The group linked to the temple bombing in 1958, the National States Rights Party, believed that Jews were conspiring to destroy the white race by advocating for integration, which would lead to miscegenation. Blacks, the NSRP believed, were an inferior species and race mixing would result in a mongrel race. But the NSRP believed the real enemy was the Jewish people.

In the words of J.B. Stoner, NSRP’s founder and the man eventually found guilty in 1980 for another 1958 bombing, at Bethel Baptist Church in Birmingham, Ala., “the negro is not the enemy. The Jew is THE enemy of our White Race and the Jew is using the negro in an effort to destroy the White Race that he so passionately hates.” The NSRP’s solution was to deport minorities to their native lands: blacks to Africa, Asians to Hawaii and Jews to Madagascar as Nazis had planned to do initially as their Final Solution.

Robert Bowers, the man accused of killing the 11 worshippers at Pittsburgh’s Tree of Life Synagogue on Saturday, was motivated by similar sentiments. Bowers believed Jews were weaponizing people of color — this time immigrants — to destroy the white race. 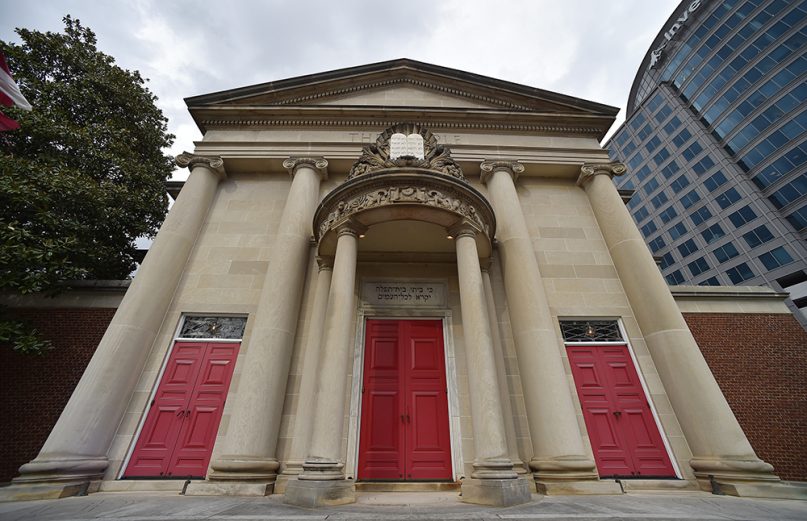 The Temple is seen in Atlanta on March 1, 2017. In 1958, a bomb blast ripped a hole in The Temple, an act of violence that still resonates today in Atlanta’s Jewish community. (AP Photo/Mike Stewart)

The Temple’s rabbi in 1958, Jacob Rothschild, was one of the authors of the Atlanta Manifesto, in which 80 religious leaders called on Atlanta officials not to give in to demands of segregationists. His prominence was part of what drew retaliatory violence to The Temple.

Similarly, the Tree of Life Synagogue and other congregations that met in its building were targeted for their work on fair treatment of refugees and immigrants.

Both attacks took place in a time of rising hate-motivated crime. The Temple bombing was one of at least 88 bombings in synagogues, black churches and homes in that era, when the South was in outright rebellion over the Supreme Court’s enforcement of school desegregation. In our times also, anti-Semitic incidents in the U.S. have surged — by 57 percent in 2017, according to the Anti-Defamation League. That is the largest year-to-year increase since the Jewish civil rights group began collecting data in 1979.

Just two days before the Pittsburgh attack, a white man in Kentucky tried to force his way into a black church; when he found the door locked, he shot and killed two African-Americans at a supermarket.

Today, speculation by extreme right and even mainstream conservatives that pipe bombs delivered to CNN and a number of Democrats were a “false flag” aimed at hurting Republicans in the midterms echoes claims made in 1958 that Jews had bombed their own Temple to gain sympathy for the civil rights cause.

Sixty years ago, bombers hoped to galvanize Southern whites around white nationalist goals, but they failed. The outpouring of support for the Jewish community from the Atlanta mayor and others gave greater momentum to the civil rights movement. Faith groups and civic leaders were outspoken and courageous and risked their own lives.

A Pittsburgh police officer patrols around the Tree of Life Synagogue and a memorial of flowers and Stars of David in Pittsburgh on Oct. 28, 2018, in remembrance of those killed and injured when a shooter opened fire during services Saturday at the synagogue. (AP Photo/Gene J. Puskar)

Decades later, The Temple in Atlanta continues to provide leadership on civil and human rights, working with diverse religious organizations that support a more compassionate response to refugees. Temple congregants work alongside the Poor People’s Campaign, which is galvanizing diverse voices to end structural racial and economic inequality.

But the parallels break down when it comes to our national leadership. Through the 1960s, Presidents Eisenhower, Kennedy and Johnson led the nation forward on civil rights and voting rights. Our current president has not firmly and clearly disavowed white nationalist groups, instead proclaiming himself an old-fashioned “nationalist,” warning about “globalists” (an anti-Semitic dog whistle). He insinuates that immigrants fleeing violence in their countries may include “Middle Easterners” — i.e., terrorists.

He continues to send mixed messages, as he did after Charlottesville, Va., saying there “good people on both sides” of the 2017 Unite the Right rally there that was organized by white supremacist groups. He is now blaming the victims in Pittsburgh by suggesting the synagogue should have had more security.

To preserve the dreams of those who came before us, we need more than civility. We must acknowledge that the core issues of anti-Semitism, racism, Islamophobia, xenophobia and all forms of “othering” are intertwined. We must condemn in no uncertain terms white nationalism. We must show courage and stand up alongside “the other.” We must not allow ourselves to be manipulated and divided. When we are, our nation suffers and our souls are wounded.

In The Temple’s response in 1958, we have a lesson from the past of how to respond to evil acts. I pray we listen.

(The Rev. Jennifer Butler is CEO of Faith in Public Life and former chair of the White House Council on Faith and Neighborhood Partnerships. The views expressed in this commentary do not necessarily represent those of Religion News Service.)