(RNS) — From the outside, it seemed like Lysa TerKeurst had it all.

TerKeurst founded a successful Christian nonprofit, Proverbs 31 Ministries, named for the description of a woman of “noble character” in the closing words of the biblical book of Proverbs that many Christian women look to for inspiration. The ministry reaches more than 6 million women through its social media accounts, as well as its daily devotions, radio messages, conferences and other resources.

She was a popular speaker and had written a number of books for those women, many rooted in her own, often relatable struggles. Those books include the New York Times best-seller “Made to Crave” about losing weight, “Unglued“ about managing emotions, “The Best Yes” about struggling with busyness and “Capture His Heart: Becoming the Godly Wife Your Husband Desires.”

Then, about two years ago, everything fell apart. TerKeurst announced her husband was having an affair. Months later, she was diagnosed with breast cancer.

So TerKeurst did what she’s always done.

She wrote about it. She shares what she learned in a new book, releasing Nov. 13, called “It’s Not Supposed to Be This Way: Finding Unexpected Strength When Disappointments Leave You Shattered.”

“Some of those things are my greatest fears, and honestly it shocked me to my core that my family would experience this,” she said. “I was more heartbroken than I’ve ever been in my life, and I’ve been through a lot of hard things.”

After a double mastectomy, TerKeurst has been declared cancer-free, she writes in the book. And she said she and her husband now are working toward restoration in their marriage, noting, “We’re not there yet.”

That’s her story, and not everybody’s will end the same, she stressed.

Meantime, TerKeurst said, “I hope my book can be that voice of a friend reaching through the darkness to say, ‘Don’t give up. It’s not always going to be this way. There’s hope on the other side of this. But right now you’re not alone.’”

The author and ministry leader talked to Religion News Service about facing life’s disappointments, finding unexpected strength and the role her faith played in that. This interview has been edited for length and clarity.

You’re very vulnerable in all your books, but “It’s Not Supposed to Be This Way” seems particularly personal. Why was it important for you to be so vulnerable with your readers? 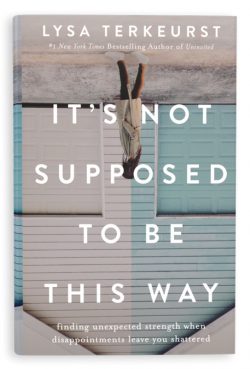 “It’s Not Supposed To Be This Way” by Lysa Terkeurst. Image courtesy of Thomas Nelson

I wanted to tackle that raw angst that we all have when we know that we serve a good God — I think most Christians would agree to that — but we serve a good God who allows hurt. That can be really complicated, and it can cause a deep spiritual wrestling when God’s timing seems questionable, when his promises seem doubtful, when his lack of intervention seems hurtful. It can really rattle us and shake us to the core.

I knew that I wanted to write the message, but I didn’t know how the story was going to unfold or how it would turn out, so I was forced to write from that messy middle place. But I think it’s a gift to the reader because that’s where most all of us live. Most of us don’t live with every circumstance in our lives tied up in a neat, nice bow when we’re singing “Kumbaya” and just having a praise party over all circumstances. We’ve either just been through some really hard stuff or in the middle of hard stuff or we’re headed to some hard stuff. I guess people would say, “Well, that’s not very positive.” No, I’m positive. We’ve either been through hard stuff, we’re in it or we’re headed to it.

Any one of those things would be hard for someone to go through. But you were going through them at the same time and very publicly. What role did your faith play in that?

Telling it publicly was not something I did immediately. I kept the news private for 18 months, but it became apparent that either the story was going to be told through the rumor mill because it was slowly leaking out, or I could get ahead of it and tell it with facts and with the deepest request for people to pray for us. When I did share the story, I was quite honestly terrified of how people would react. I didn’t want to invite the weight of public opinion into our very private pain. I did it with a lot of prayer but also a lot of trepidation.

However, when the news came out, I was so amazed that the church did what the church should do — big “C” church, the Christian community. Instead of unleashing a bunch of judgment and questions that I feared, it actually unleashed millions of people to pray for us. And I feel like we’re still reaping the blessing of those prayers even now.

You write about some of the “bumper-sticker” advice that well-meaning people share with their friends going through disappointments. What are some of those things people may not realize are actually hurtful?

So many times I think Christians feel the need to explain something about God in the midst of someone else’s hardship, and I would just encourage them not to do that. The Bible makes it clear: “Weep with those who weep.” So sit down and weep with them. If they’re weeping, weep. If they’re laughing, laugh. If they need practical stuff done, then get practical stuff done without feeling the angst, like I’ve got to say the perfect thing.

Not all of our words need to be profound. Not all of our words need to be deeply spiritual. They can just be simple, like, “I love you,” “I’m here for you,” “I’m going to go buy you a gallon of milk,” “I’m going to mow your yard,” “I’m gonna take care of your kids for an hour so you can go take a nap.” Some of those things will speak more about God using you to bring his presence into a situation than any kind of bumper-sticker statement ever could.

You’re writing about a theology of suffering: Does God cause disappointments in people’s lives? Does God allow them? Does God use them? How do you as a Christian reconcile disappointment with what you believe about God? 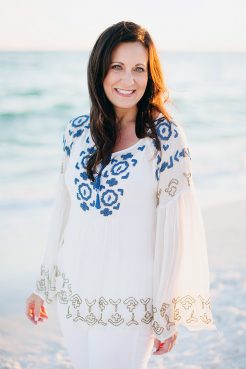 I think any time our faith and our feelings come in conflict with one another, it can be very, very disillusioning — almost spiritually disorienting. We know God will work good for us, but here’s where we get in trouble: We like to run ahead of God and write the good story and then hold God accountable to a story that we’ve written, not the one that he’s promised.

One thing, just in a practical sense, I’ve had to learn is when I’m sitting in the midst of my hardships, I have to force my brain to not consume my prayer life with all of my suggestions of how God needs to fix this. No human should have to carry the weight of being their own God. But so many of us are exhausted trying. We feel like we have to make all these suggestions to God. Really, when I look at especially the hardships in my marriage — and now I’ve been in this for almost three years — not one of my suggestions of how God could fix things, restore things or redeem things ever came to pass. But  I have to say that God has woven together a story that was so unlikely, so full of ups and downs and twists and turns, I would have never been courageous enough to write it. I also could have never experienced the outcome that only God could have allowed me to experience.

You mention Christians are really bad at talking about disappointments. Why is that?

I think a lot of us don’t know how to talk about it because we don’t want to sound ungrateful. We want to say, “Oh, I need to be joyful and patient and happy.” We do need to be joyful and patient and happy. Yes to all of that. But we’re human, and we’re going to have very real human emotions. We are living in the midst of a sin-soaked world, and so, of course, there are going to be disappointments. We’ve got to learn how to talk about them and encourage one another in the midst of them because they’re going to be part of our lives every single season that we live here on earth.

My great hope for this book is that it will open up dialogue amongst those people who are Christians — and even people who are just kicking the tires of faith —who’ve been through disappointment and are desperate to read something where they can closely relate to the circumstances of disappointment in another person’s life. I hope it opens up the conversation so that we can get healed and healthy and whole and have a way to process our disappointments that’s closely aligned with truth. 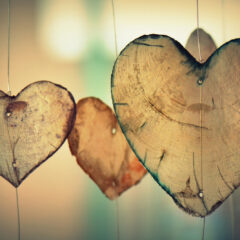