JERUSALEM (RNS) — Sarah Samson, a mother of four, says she became “very upset” when she learned that a girl in her daughters’ school here had come down with the measles.

“The school is haredi,” Samson said, using the Hebrew term for ultra-Orthodox. “In our community there are so many pregnant women and families with many babies. If I was pregnant or had a child under the age of 1, I’d be freaking out.”

Measles, a highly contagious virus whose symptoms include a telltale rash, can also cause severe complications and even death. At greatest risk are children too young to be vaccinated, the elderly, pregnant women and people with chronic illnesses or a suppressed immune system.

The outbreak in Israel and an ensuing outbreak in the U.S. have hit ultra-Orthodox Jewish enclaves in both countries particularly hard. Dozens have contracted the virus in New York and New Jersey, and more than 1,400 people — the majority of them haredi — have fallen ill in Israel, half of them in October alone.

One Israeli toddler died after contracting measles from his parents, who are reportedly members of an extremist ultra-Orthodox sect that does not recognize any government authority or comply with governmental health regulations.

On social media, some angry Israelis said the toddler’s parents should face criminal charges for endangering their child and others. On Wednesday, the Yeshiva World reported that several prominent Israeli rabbis have signed a document that reads, “Whoever isn’t vaccinated is a murderer.”

But Dr. Hagai Levine, secretary of the Israel Measles Elimination Committee, attributed the outbreak in Israel mostly to a shortage of pediatric nurses and the complicated logistics of raising a large haredi family.

“There is nothing explicitly religious causing these outbreaks, and vaccination refusal is rare,” he emphasized.

Levine blamed the Israeli government, saying the number of nurses who provide health care in well-baby clinics, which give vaccinations and track children’s development through age 6, needs to be increased.

“In Jerusalem, where most of the measles cases are occurring, a nurse that used to treat 100 children is now responsible for 200 children. She doesn’t have the time to track down all the children whose vaccinations are overdue,” Levine said. 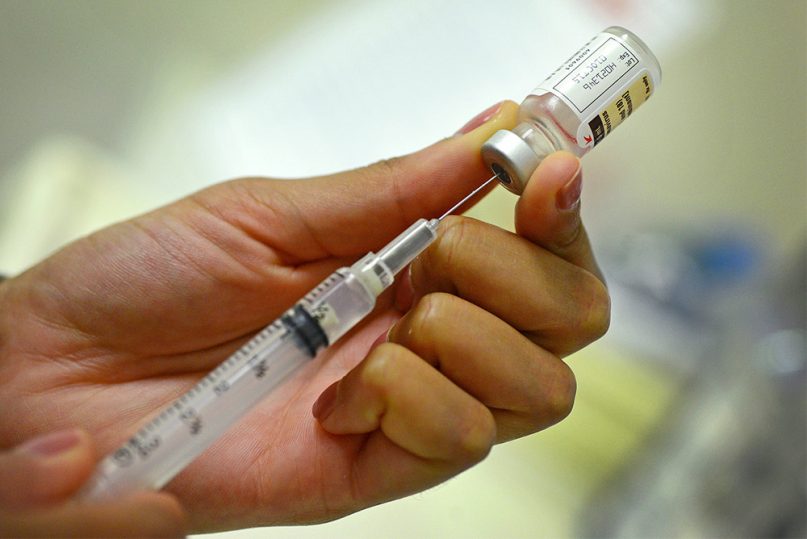 The U.S. outbreak has prompted some American synagogues and schools to ban the entry of anyone who has not been vaccinated against the virus, the Yeshiva World reported.

The health commissioner of Rockland County, N.Y., home to New Square and Monsey, two heavily ultra-Orthodox towns, has ordered unvaccinated kids to stay home from schools, and at least one Jewish school has barred “religious exemptions” as an excuse for not vaccinating.

One Lakewood, N.J., synagogue told its members that “anyone who is not vaccinated, adults or children, may not enter the shul [synagogue] under any circumstances,” according to the Yeshiva World.

In Israel, ultra-Orthodox families have eight children on average and tend to live in tight quarters.

Once measles makes an appearance, “it spreads very fast due to the crowding” and the high number of babies either too young to be vaccinated or whose vaccinations were delayed, said Levine, who works at the Hebrew University-Hadassah School of Public Health.

“Let’s say you have 10 children. You vaccinate the first few on schedule but when you have more children you may wait until a child is 2 years old instead of 1 year. You may not have a car or you might have limited resources. It becomes complicated.”

Although there are some anti-vaxxers — parents who refused to vaccinate their children because they believe doing so poses a medical danger — in all sectors of society, “this is very rare in Israel,” Levine said, where the overall vaccination rate is over 95 percent.

“The fact that Israel has such a good vaccination system has kept the outbreak relatively small.”

But Levine acknowledged that the ultra-Orthodox are not all complying with vaccinations. “There are different communities within haredi society. Some are vaccinated at very high rates while some don’t want any connection with the government.”

Levine said some ultra-Orthodox rabbis are urging their followers to vaccinate, and he hopes many more will do so in the days to come.

“Judaism commands us to save lives, so it is natural for us to protect our health and the health of our neighbors,” Levine said.

Walking with some of her young grandchildren through the bustling streets of Meah Sha’arim, an ultra-Orthodox neighborhood in Jerusalem, a woman who gave her name as Chana insisted that the haredi community overwhelming supports vaccinations, though she has heard of some ultra-Orthodox sects that don’t.

“I made sure all of my 10 children are vaccinated,” said Chana, who declined to give her last name for reasons of religious modesty. “The parents who don’t vaccinate are risking the lives of our children.”

Her daughter, she said, had just given birth to twins.

“She’s scared to death her kids will bring home the measles and get the babies sick,” the grandmother said.