JERUSALEM (RNS) – Guyoz Golan, a young Israeli businessman, just moved to Tel Aviv, but as a registered voter in Jerusalem he is planning to visit the city on Tuesday to cast his ballot for Ofer Berkovitch, the secular candidate competing in the Nov. 13 runoff mayoral election here.

“Like everything else in Jerusalem, this election reflects the clash between the secular and ultra-Orthodox,” said Golan, sipping coffee with his brother, Colin, at an outdoor café Friday afternoon, the eve of the Jewish sabbath.

That clash, between Berkovitch and Moshe Lion, an Orthodox Jew, has become focused on religious issues, including sabbath restrictions in Israel’s capital. The city’s haredi, or ultra-Orthodox, Jews want a complete sabbath-related shutdown of commerce for 25 hours in predominantly Jewish West Jerusalem, including nightclubs, bars and movie theaters that are now open.

“I’m not against religion or religious people, but I want public transportation on Shabbat and a mayor who is open-minded,” asserted Golan, using the Hebrew word for sabbath.

Lion, who reportedly has the backing of haredi rabbis and politicians, has promised to build homes for the ultra-Orthodox sector in mixed religious-secular neighborhoods. He opposes public transportation on the sabbath and has vowed never to attend the city’s annual Gay Pride march or participate in a panel in a Reform synagogue.

Berkovitch has promised the exact opposite. 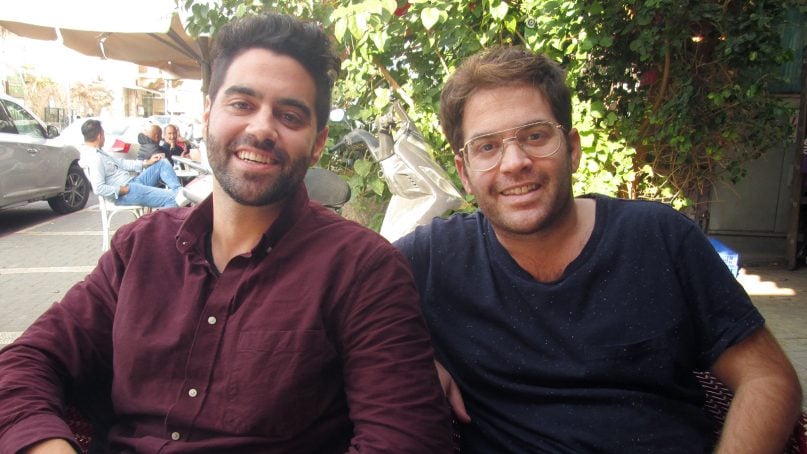 Guyoz Golan, left, and his brother Colin Golan, in Jerusalem on Nov. 9, 2018, said they plan to vote for Ofer Berkovitch for mayor. Berkovitch, a secular candidate, is running on a religious freedom platform. His opponent, Moshe Lion, has been endorsed by several ultra-Orthodox rabbis. RNS photo by Michele Chabin

Gilad Malach, director of the ultra-Orthodox program at the Israel Democracy Institute, said some of the animosity between the ultra-Orthodox community and other communities stems from the city’s longstanding housing shortage, exacerbated by the high haredi birth rate.

“Haredim are moving into religiously mixed neighborhoods and changing the atmosphere” by opening ultra-Orthodox schools and synagogues and sometimes closing streets to traffic on the sabbath or imposing informal dress codes on women, Malach explained. “Less religious and secular residents are afraid that eventually they won’t feel at home in their own neighborhoods.”

Yossi Klein Halevi, a senior fellow at the Shalom Hartman Institute, agreed that non-haredi Jews “fear that Jerusalem, the capital of the secular state of Israel, will become inhospitable” to them.

He warned that a haredi victory would increase the flight of young non-haredi residents who make up the city’s future tax base, fuel its vibrant arts scene and attend its world-class university.

Roughly 60 percent of Jerusalem’s population is Jewish: about half are haredi, the rest secular, traditional or modern Orthodox.

The other 40 percent are Arabs, who are about 99 percent Muslim and 1 percent Christian. Most comply with the Palestinian leadership’s decree to boycott Israeli elections.

Anat Hoffman, executive director of the Israel Religious Action Center, the political arm of the Reform movement in Israel, bemoaned “the missed opportunity” for religion to be used as an inspiration for reconciliation in an often fractured city.

“Instead of religion being viewed as a positive common denominator among us, it’s being used in the most negative way,” said Hoffman. “Candidates have demanded that the municipality no longer hang the flags of the gay pride parade, and to discontinue religious services to Christians. It’s being used to curtail the life choices of others.” The rhetoric around the runoff has gotten nasty at times.

In a video taken Sunday during a political rally, Interior Minister Aryeh Deri, a leader in one of the haredi parties supporting Lion, appeared to call Berkovitch the devil and claimed that, if elected, the secular candidate will “desecrate Jerusalem.”

Deri stated that “all the great rabbis of Israel support [Lion] against a non-religious candidate who literally wants to continue to transform Jerusalem and turn our holy city into a city like any other city.”

That’s what concerns Mordechai Cohen, a full-time student at a haredi yeshiva.

“Israel is full of cities but there is only one Jerusalem, the holy city Jews have prayed toward and died for, for centuries. Foreign armies ransacked our holy temples, destroyed our synagogues, our ancient cemeteries. Now we have our own country and it’s within our power to transform Jerusalem into the religious sanctuary it was always meant to be,” Cohen said.

Colin Golan, Guyoz’s brother, said he also wants to maintain Jerusalem’s special character, but not at the expense of non-Orthodox residents.

“I can do almost anything I want to do on a Saturday, but there is no public transport, so the poor who can’t afford to buy a car can’t visit grandma on their day off,” he said.

The Golan brothers said most of their friends have left Jerusalem to pursue a more secular lifestyle.

“Young people want to stay here, but when it comes to religious freedom, Jerusalem is pretty much a lost cause,” Colin Golan said.