(RNS) — Grown children who were adopted into their families sometimes talk to me about the difficulties that come along with sorting through their identity questions. One of these Christians said to me not long ago, “You just can’t imagine what it is like to sit across a table from people who are a mystery to you, to think to yourself, ‘I am nothing like you! How did I end up in this family?’”

“I actually do know what that’s like,” I told her. “It’s called Thanksgiving dinner.”

As much as we idealize family, our idealism tends to fade when we deal with the very real frictions that can happen between members of a family with different personalities and different perspectives. Some of this is just navigating what conversations to bring up and which to avoid. Some of it is more serious: family members who are hostile to your faith, for instance. Or maybe you are someone who thought you were an empty nester, now dealing with a son or daughter back in their old bedroom, maybe with a spouse or a partner or some chil­dren now in tow.

That’s difficult enough with one’s family of origin, where at least one has had the training ground of a lifetime to know, as they say, “where the bodies are buried.” When one adds to that the mix of in-laws, often with their own very confusing dynamics, unspoken feuds and peace treaties, and complicated back stories, this can become even more fraught. How do we then carry the cross when tensions inevitably come?

First, the gospel calls us to peace. Yes, Jesus tells us that he brings a sword of division, and that this sometimes splits up families (Matthew 10:34-37). But there’s a difference between gospel division and carnal division (1 Corinthians 1:10-17). The Spirit brings about peace (Galatians 5:22), and the sons of God are called to be peacemakers (Matthew 5:9) so we should “strive for peace with everyone” (Hebrews 12:14).

The divisiveness that happens within extended families is often about conflicting spiritual worldviews, but it’s not always the unbelieving family member persecuting a Christian, but rather a Christian who decides to go ahead and sort the wheat from the weeds at the fam­ily table, rather than, as Jesus told us, waiting for Judgment Day (Matthew 13:29-30).

Yes, the gospel exposes sin, but not for the purpose of condemnation (John 3:17). The gospel strategically exposes sin in order to point to Christ. Antagonizing unbelieving family members because they think or feel like unbelievers is not the way of the cross. Moreover, the Scripture calls us to honor. We are to fear God, to obey the king and to honor (notice this) everyone (1 Peter 2:17). If cousin Hattie Jo does tequila shots in her car outside the family gathering just to take the edge off of her cocaine, well, she still bears the imprint of the God you adore. You cannot do the will of God by opposing the will of God.

That is, you cannot evangelize, for exam­ple, your unbelieving father and mother by disrespecting them. God tells us to honor those to whom honor is due. That means showing, everywhere possible, respect and gratitude.

This calls also for humility. Many of our tensions within extended families are caused in part by treating our differences over Jesus the same way we treat our differences over foreign policy in the Middle East, or the chances of our favorite sports team to make the playoffs this year, or who deserves the most gratitude for preparing the family meal.

As Christians, we cannot be like the professional polarizers in our culture around us, who value having the last word. Jesus never sought to prove he was right. Not once — and he was accused of everything from being a drunk to being a demoniac. He rejected Satan’s temptation to force a visible vindication — by throw­ing himself from the temple pinnacle and being theatrically rescued by God — waiting instead for God to vindicate him at the empty tomb.

This calls then also for maturity. If we are following the way of the cross, we will follow the path Jesus took: from temptation to suf­fering to crucifixion and then ultimately to glory.

Often we think of those tests as big, monumental things, but they rarely are. God might bring you to maturity in Christ by your fighting lions before the emperor or standing with a John 3:16 sign before tanks in the streets of Beijing. More likely, though, this testing will be in those seem­ingly little places of temptation — like whether you will bear patiently with the belching brother-in-law at the end of the table who wants to talk about how the Cubans killed President Kennedy or about how he can make you rich by joining his multilevel marketing business selling herbal laxatives.

One of the questions we must ask ourselves is whether the tension we feel should be attributed to our own imma­turity, and sometimes the answer is yes.

In any case, though, see the tensions around you as more than something you would undo if only you were part of a different family. They will always be here. 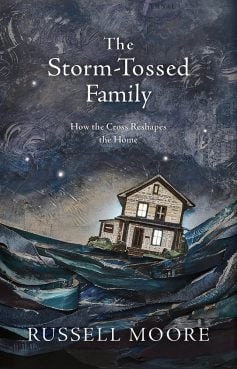 “The Storm-Tossed Family: How the Cross Reshapes the Home” by Russell Moore. Image courtesy of B&H Books

Remember also that the cross points us to a Day of Judgment when we will give an account for every idle (that means seemingly tiny, insignificant or unmemorable) thought, word or deed. We will see then that the Spirit has led us to carry our crosses into every possible arena in which to live out the gospel, including Aunt Flossie’s dining room table.

(Russell Moore is president of the Ethics and Religious Liberty Commission, the public-policy arm of the Southern Baptist Convention. This article was adapted from Moore’s recently released book, “The Storm-Tossed Family: How the Cross Reshapes the Home.” The views expressed in this commentary do not necessarily represent those of Religion News Service.)

News
The relaxing and tingly world of Christian ASMR
Follow us on Facebook!
Submit your photos to RNS