JERUSALEM (RNS) – A popular meme on social media here shows an illustration of Mary, Joseph and the baby Jesus in Bethlehem. “Why did Mary and Joseph stay in a stable?” asks one version. “Because Airbnb blocked all listings for Jews in Judea,” the Hebrew term for the West Bank.

The meme plays on last week’s announcement by Airbnb, the online lodging app, that it had pulled all 200 listings from “Israeli settlements in the occupied West Bank,” which it said is “at the core of the dispute between Israelis and Palestinians.”

Another in the series of biblical riffs on Airbnb’s decision shows the Jewish patriarch Abraham, who in the Book of Genesis entertains three messengers from God in his tent, turning away guests. 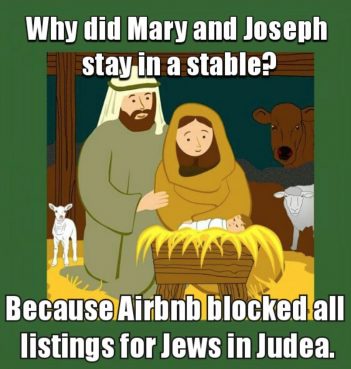 A meme circulating on social media about Airbnb and the West Bank. Screenshot

Activists in the boycott, divestment and sanctions (BDS) movement have long urged Airbnb and other companies to stop doing business in Israel until it relinquishes the West Bank, East Jerusalem and the Golan Heights, which it captured during the 1967 Middle East war.

Airbnb’s decision to comply has generated a firestorm of controversy and allegations of anti-Semitism against the company.

Eugene Kontorovich, a professor of law at the George Mason University School of Law, said Airbnb’s new policy is anti-Semitic and may violate discrimination laws.

“They say they’ve adopted a policy related to ‘disputed territories,’ but it only applies to Israel, the Jewish homeland,” Kontorovich said. “Even in northern Cyprus, where all the Greek Christians were thrown out by Turkey in the 1970s and which Turkey continues to occupy, Airbnb includes tons of listings.”

The boycott does not pertain to listings in mostly Palestinian East Jerusalem or the Golan Heights, Airbnb’s statement said, even though the international community also considers them occupied territories.

Singling out Jewish territory smacks of anti-Semitism, Kontorovich said, and reinforces the myth that Palestinians but not Jews are indigenous to the region.

“The word ‘Jewish’ comes from the word Judea. It doesn’t get any more Jewish homeland than that,” Kontorovich said.

Josh Hasten, spokesman of the Gush Etzion Regional Council, a settlement bloc, said the boycott “is targeting a certain group of people based on their religion and their geographical location, which has been the heartland of the Jewish people for 2,000 years.”

Palestinians have limited self-rule in the West Bank, but Israel continues to control parts of the territory and severely limits who can enter and leave via military checkpoints and a security barrier that was built to prevent terrorists from entering Israel.

“One can disagree on the tactic of boycotting of settlements. But calling Airbnb’s decision anti-Semitic is a complete dilution of our political discourse, and conflates Israel with the occupation,” Frima Bubis wrote in an op-ed in 972 magazine.

“Furthermore, there are many Israeli and non-Israeli Jews who not only support the company’s decision, they work on a daily basis with their non-Jewish partners to hold up a mirror to Israeli society in order to end the occupation,” wrote Bubis.

In Bethlehem, Elias Deis, a Palestinian who manages the tourism program of a Palestinian Christian activist organization, said he supports Airbnb’s decision and the BDS campaign “because only international pressure on Israel will end the occupation and give Palestinians their full rights.”

Jewish settlements, he said, “are the main obstacle to peace. Those who support settlements are leading us to a dead end, where Palestinians and Israelis won’t be able to find a peaceful solution.”

But for homeowners whose businesses are tied to their Holy Land locations, the Airbnb boycott brings uncertainty. 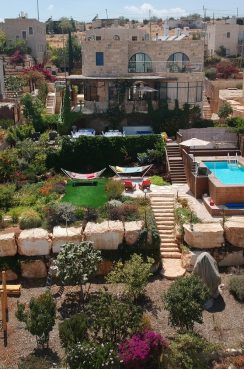 The backyard of Villa Herodian, a home in the West Bank settlement of Tekoa that was formerly listed on Airbnb. Photo courtesy of Lewis Weinger

Four months ago, Lewis Weinger and his wife, Hindy, decided to offer their home in the West Bank settlement of Tekoa on Airbnb. The property, called Villa Herodian, overlooks the Judean hills and Herodian, the winter palace built by King Herod about 2,000 years ago. With its stunning desert views and a swimming pool, Villa Herodian is already a sought-after venue for special events.

As soon as the couple listed the property on Airbnb, the international rental portal, prospective renters began to make inquiries. “We’ve gotten a lot of interest, especially for next summer. Now that may not happen and I think it will hurt our business,” said Lewis Weinger.

But for Weinger, the decision affects more than business. From biblical times through the Holocaust, he said, Jews have been exiled from their homes.

Then as now, “it is anti-Semitic to single out Jews,” he maintained.

He has not yet decided whether to join a lawsuit filed against Airbnb by the Jewish owner of another delisted property.

“Airbnb may reverse its decision,” Weinger said hopefully. “But who knows?”