BIRMINGHAM, Ala. (RNS) — Bob Terry, the longtime editor of The Alabama Baptist, is known for his journalistic excellence, his personal integrity in the midst of church controversies and his unflagging calls for the Christian mission to build God’s kingdom.

But when he retires at the end of this year, Terry’s most lasting legacy in the hearts of Alabama Baptists is likely to be the vulnerable honesty with which he shared his grief after the sudden death of his first wife in 1998.

Terry and his wife, Eleanor Foster Terry, then a professor and dean at the Methodist-affiliated Birmingham-Southern College, had been at a meeting of the Baptist World Alliance in South Africa when a car struck their taxi, knocking them from the vehicle.

Both were injured. Eleanor slipped into a coma before being airlifted back to Birmingham, where she died on July 20, 1998.

For the first three years after Eleanor’s death, Terry would visit her grave on the anniversary of her passing. Every year it rained.

More than once, Terry recalled later in a column, “I sat there praying that God would strike me with a lightning bolt.”

“The loneliness was almost unbearable,” he wrote.

Terry shared the anger, confusion and devastation that comes with such a loss with his readers, said Gary Fenton, a longtime friend, pastor of Terry’s home church and board member of The Alabama Baptist.

“Here he is, an ordained minister and editor of the Baptist paper — people thought he was going to come through with these marvelous clichés to make it all go away,” said Fenton. “Those were probably his best-received editorials. You saw his pain. He avoided the easy answers.”

Terry never intended a career in denominational journalism. Instead, he wanted to be a pastor.

But he didn’t know much about his denomination. So he took a temporary break from doctoral studies at Southern Baptist Theological Seminary to work with the Kentucky Baptist Convention’s newspaper, the Western Recorder. 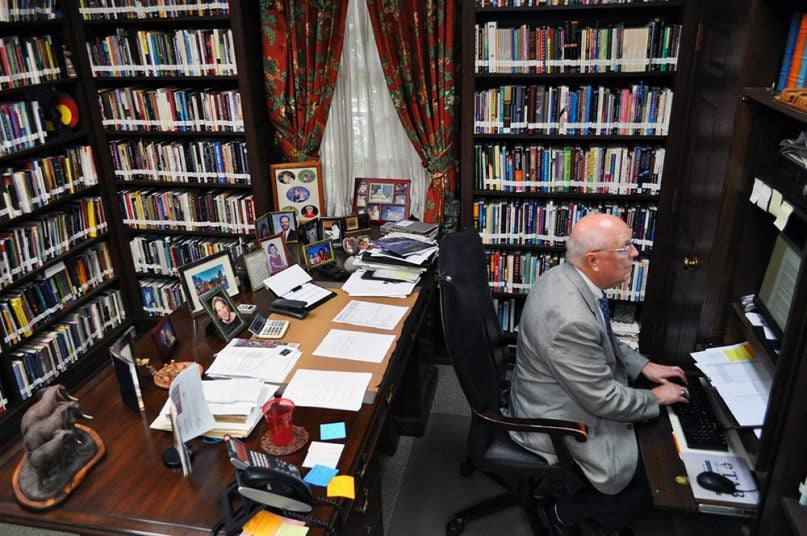 “By then, I’d been in seminary, but I still felt like an outsider looking in,” Terry told Religion News Service during an interview at his book-lined office in Birmingham. “I thought taking the position would give me the opportunity to learn the inside workings of my denomination and to visit a lot of churches.”

That temporary break turned into 50 years of church journalism.

After seven years at the Recorder, Terry was called to edit the Missouri statewide Baptist newspaper, the Word & Way, where he spent two decades, navigating serious statewide church controversies before being called to Alabama in 1995.

“It worked — I learned my denomination,” Terry said. “I just didn’t use it as I had anticipated.”

Terry, who spent his childhood on a cotton farm in northwest Alabama, said he and his family were not regular churchgoers until they moved to Michigan in the 1960s for his father to work in the automotive industry.

There, when Terry was 12, the family joined a newly planted Southern Baptist congregation that had been established primarily as a mission to displaced Southerners. Terry’s leadership skills were quickly recognized and cultivated.

By 13, Terry was a messenger — an official voting representative from his congregation — to the organizational convention of the Michigan Baptist Convention. By 14, he knew he was called to the ministry. By 21, he was ordained and finishing an undergraduate degree in history and communications in preparation for seminary. He was also beginning the first of what would be a lifetime of interim pastoral positions he would hold alongside his other work.

Fenton first met Terry when he sat on the search committee that called Terry to Missouri. At 32, Terry was the youngest person ever tasked with editing a statewide Baptist newspaper. His appointment came during some bitter internecine struggles among Missouri Baptists that preceded the national upheavals in the denomination beginning in the 1980s.

“Sometimes people got frustrated with him — some people wished he would only report the good news or what the leaders wanted,” said Fenton. "But I distinguish Bob Terry from a lot of denominational editors in that he is a committed journalist. He didn’t allow the Word & Way or The Alabama Baptist to become merely a church newsletter.”

“Manipulating readers by withholding information has no place in a denomination committed to the priesthood of all believers,” Terry once wrote in an editorial. “The trustworthiness of Baptist influence is proven by sharing the difficult story.”

Terry tried to find a balance between reporting on denominational infighting and telling the stories of the work that ordinary church members were doing.

In 2000, when Terry reported on a controversial revision of the Southern Baptist Convention's “Baptist Faith and Message,” which bars women from senior pastoral positions and advocates the submission of wives to husbands, he contrasted that story with a report from a concurrent meeting of the Women’s Missionary Union in which women rescued from the sex industry and drug addiction were introduced and given voice.

“Sometimes the most important information to relay is not the debate on the floor, but the difference Baptists are making in changing lives and affecting society,” Terry said. “We have to tell what happens on the convention floor, but what’s most important? What’s going to help our readers grow as disciples?”

Many of Terry’s columns remind Baptists of their own history and organizational pillars — including the historic leadership roles that women have filled. And many of his columns reminded Baptists that whatever their beliefs, they have real work to do in the world.

“We are to radiate the glory of God into all actions and situations,” Terry said. “If we limit God — banish God — to Heaven, then we are doing what the secularists do: saying God is about belief, not about life. That’s heresy.”

In retirement, Terry, who remarried in 2002, hopes to finish a book about grief, aimed at helping others navigate tragedy. He expects to expand his blog, NowConsiderThis.com, and to remain active on the boards of Bread for the World and the Baptist World Alliance.

“This has been a very fulfilling life, a fulfilling ministry,” Terry said.

And he says he is leaving the paper in good hands.

Terry will be succeeded as editor by longtime Alabama Baptist writer and editor Jennifer Davis Rash. She will be the first female editor of the statewide Baptist newspaper.

Terry leaves a legacy she expects to build on.

“Bob taught me how being part of the ministry changes how we tell the story — we have the responsibility to tell the truth but also to be part of the family,” Rash said. “We have to be able to come back tomorrow and have a conversation."