(RNS) — Congo is preparing for a crucial vote to elect a successor for President Joseph Kabila, who has been in power since 2001. A successful election would mean the first peaceful transition of power for a country whose rule by dictators has been broken only by coups and civil wars.

“What is at stake is unity of our country, the integrity of our national territory, justice, peace and the improvement of the people’s living conditions,” said the country’s Catholic bishops, spiritual leaders to half of the population, in a statement last month.

Two years ago the bishops brokered a pact between Kabila and the opposition that allowed Kabila to remain in power until his successor is elected. 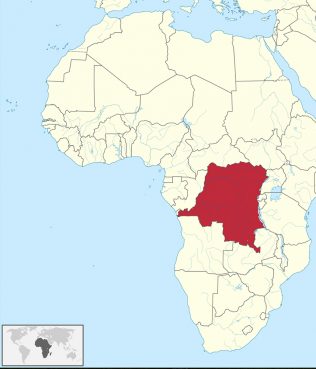 The Democratic Republic of Congo in central Africa. Map courtesy of Creative Commons

Now the bishops, joined by leaders from other churches, are urging their followers to turn out in large numbers to elect leaders who can defend the country, guarantee freedoms and do not steal the country’s resources, among other qualifications.

“We are urging the people to elect those who stand for progress and those (who) would not steal people’s mineral wealth,” said Bishop Josue’ Bulambo Lembelembe of the Church of Christ in Congo.

The bishops say they do not support any particular candidate but instead want the people to vote their conscience and elect a leader they deem trustworthy.

“We have told everyone to prepare to participate in the elections. We have urged them to ensure the process is carried out in a peaceful atmosphere,” Archbishop Marcel Utembi, president of the Congo Catholic bishops conference, told Religion News Service.

More than 40 percent of the country’s people are Roman Catholics, while a similar proportion is Protestant. An estimated 10 percent are Muslims, while others follow an indigenous group known as Kimbanguist.

While rallying people to the polls, religious leaders have been leading prayer vigils and preaching against the violence that has marred the electoral campaigns.

On Dec. 13, a mysterious fire burned down the electoral commission’s warehouse in Kinshasa. Police reports indicated that nearly 8,000 of the 10,000 electronic voting machines and ballot boxes to be used in the capital for the election were destroyed. The computerized voting system, purchased from a South Korean firm, has been met with mistrust after a similar system was abandoned in Argentina because it was vulnerable to hacking.

In eastern Congo, people are also dealing with an Ebola outbreak, posing a further obstacle to getting people to the polls.

“I think some people are running out of patience,” said Lembelembe. “This raising (of) tensions days before elections is not good.”

The race has attracted 21 presidential candidates, with Emmanuel Ramazani Shadary, widely viewed as Kabila’s proxy, as a front-runner. The opposition has fielded two main candidates, Felix Tshisekedi and Martin Fayulu.

The Rev. Donatien Nshole, secretary-general of the bishops conference, stressed that the bishops only want to ensure that the election is credible.

Church leaders have urged the international community to accompany the people of Congo in this process.

“We want them to be there and tell the truth and defend the truth when the results are released,” said Utembi. 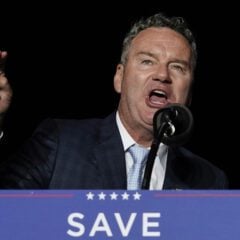