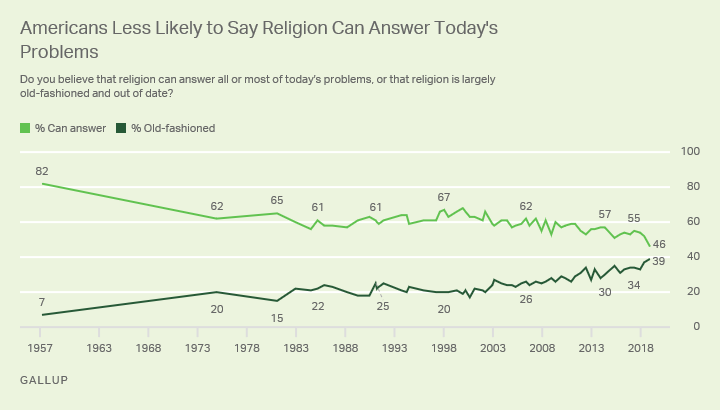 For taking the temperature of religion in America, Gallup's regular surveys are always worth a look, because many of the same questions have been asked for over half a century. The latest iteration was released just before Christmas.

It will not surprise you to learn that over the long term the temperature has gone down, but the story is not one of slow and steady decline.

Thus in 1952, on the eve of the so-called Eisenhower revival, 75 percent of Americans said that religion was "very important" in their lives and 20 percent said it was "fairly important." Now the numbers are 51 percent and 21 percent. But the the bulk of the shift had taken place by the late 1970s, with little change since then.

The most bouncing around comes in response to the question about whether the influence of religion on life in the U.S. is rising or declining. In line with a declension narrative that can be traced back to Puritan times, more Americans have usually opted for decline than the opposite, but there are notable exceptions.

The election of Jimmy Carter in 1976, hailed by Newsweek as the Year of the Evangelical, pushed up the number of those who said religion was on the rise to the level of the decliners, and during the "morning again in America" Reagan years, the risers outstripped them. Decline won the day during the presidencies of Bush I and Clinton, with the exception of the year of the latter's impeachment, which tells you where the populace thought the impulse to impeach was coming from.

In the year after 9/11, more Americans than ever before—71 percent—thought religion was on the rise, but the decliners quickly reasserted themselves as it became clear that the attacks had inspired no major return to the pews. In 2006, the risers were briefly back on top, but that did not reflect a positive assessment of religion's influence. In the midterms, voters kicked the GOP out of power in both houses of Congress.

Since Barack Obama became president in 2009, a yawning gap has opened up that as of this month is at its widest in Gallup history, with 78 saying religion is in decline and just 19 percent saying it is on the rise. Evidently, Americans do not see the rise of evangelical power in the White House as evidence of religion's increasing influence on life in the U.S.

Finally there's the question about whether religion can answer "all or most of today's problems," versus whether it is "old-fashioned and out of date."

Back in 1957, 87 percent opted for "can answer"; seven percent, for "out of date." Today, that 80-point gap has shrunk to a mere seven points, 46 percent versus 39 percent. Half the shrinkage had taken place by the mid-70s and during the Obama years, there was a significant additional dip.

My surmise is that this has something to do with the aforementioned rise of evangelical power in the White House. That power, from its hostility to LGBT people to its lack of concern for the poor and the sick and the migrant to its rejection of climate change, hardly seems like an answer to today's problems. Old-fashioned and out-of-date, it seems more like evidence of religion in decline.