WASHINGTON (RNS) — When the 116th Congress was sworn in on Thursday (Jan. 3), it became one of the most religiously diverse delegations in American history, with more than a few lawmakers expected to take the oath of office while placing their hands on books other than the Christian Bible.

Still, according to a new survey from Pew Research, the incoming class of legislators is predominantly Christian — even more so than the country itself.

“While the number of self-identified Christians in Congress has ticked down, Christians as a whole – and especially Protestants and Catholics – are still overrepresented in proportion to their share in the general public,” researchers wrote. “Indeed, the religious makeup of the new, 116th Congress is very different from that of the United States population.”

The number of Christians in Congress is dipping slightly compared with the 115th session, dropping from 90.7 percent to 88.2 percent. By contrast, 71 percent of U.S. adults identify as Christians. (Pew’s Christian category includes Catholics, Protestants, Mormons, Orthodox Christians, Christian Scientists and other faith groups.)

Most Christians in Congress are Protestant, including 72 Baptists, 42 Methodists and 26 members each for Presbyterians, Lutherans and Anglicans/Episcopalians. Catholics make up 30.5 percent with 163 members, and Mormons claim 1.9 percent with 10 members. Five members of Congress are Orthodox Christian. 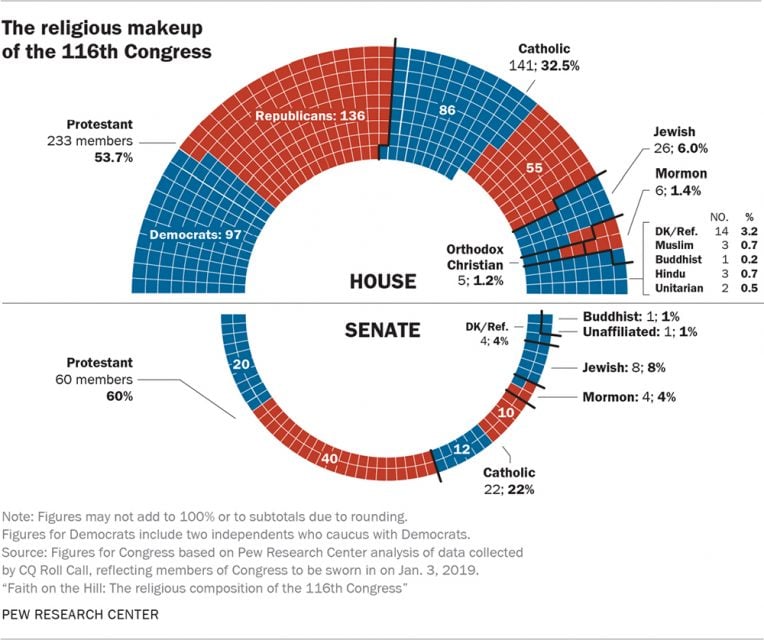 Researchers noted that the proportion of Catholic lawmakers in the U.S. House of Representatives has shifted toward the Democratic Party in recent years.

But the new Congress has 31 more Catholic Democrats than Catholic Republicans in the House (86 versus 55).

Meanwhile, the influx of non-Christian members in Congress is almost entirely among Democrats or independents who caucus with Democrats.

According to Pew, 61 of the 281 Democrats or independents are non-Christian: In addition to 32 Jewish members, all Muslims (three), Hindus (three), Buddhists (two) and Unitarian Universalists (two) in Congress caucus with Democrats.

One Democrat — Sen. Kyrsten Sinema of Arizona — identifies as religiously unaffiliated. Eighteen “refused to specify” their religion, according to Pew.

Among the general public, 23 percent identify as atheist, agnostic or “nothing in particular.”

By contrast, only two of the 253 Republican members in the 116th Congress — Reps. Lee Zeldin of New York and David Kustoff of Tennessee — identify as something other than Christian (both are Jewish). Pew did not include a representative from North Carolina’s 9th District, where election results have not been certified in the wake of electoral fraud allegations.

Many minority faith groups saw their representation increase this year after a wave of Democratic victories in the 2018 midterm elections.

The number of Jews jumped from 30 to 34, Muslims rose from two to three, and Unitarian Universalists ticked upward from one to two.

Hindus continue to claim three members of Congress, all of whom are returning from the 115th Congress.

Christian Scientists, on the other hand, lost both their members.

And if you’re looking for evidence of America’s increasing religious diversity on Thursday, keep an eye on Democrats Tulsi Gabbard and Rashida Tlaib as they are sworn in to the House. Gabbard, a Hawaii Hindu and a potential 2020 presidential contender, is a returning member of Congress who has used a Bhagavad Gita while taking the oath of office in the past. Meanwhile, Tlaib, a Michigan Muslim who will become the first Palestinian-American woman in Congress, plans to place her hand atop Thomas Jefferson’s personal copy of the Quran.

Finally, despite the media fervor surrounding the election of prominent Republican (and Mormon) Mitt Romney to represent Utah in the Senate, Pew researchers noted the percentage of federal lawmakers affiliated with the Church of Jesus Christ of Latter-day Saints is declining.

“The 116th Congress also has the fewest Mormon members in at least a decade – members of the Church of Jesus Christ of Latter-day Saints now number 10, a low over the last six congresses,” they wrote.

News
Poll: White evangelical support for Israel higher than any other Christian group
Follow us on Facebook!
Submit your photos to RNS