Keith Ellison of Minnesota, the first Muslim member of Congress, took the oath of office on the Quran.

And on Tuesday (Jan. 8), Nikki Fried, the lone Democrat to win statewide office in Florida, was sworn in as commissioner of agriculture using the first Hebrew Bible published in America. The University of Florida’s two-volume Hebrew Bible was printed in 1814 in Philadelphia. Photo courtesy of Price Library of Judaica

Fried, the first Jewish woman to serve in the post in the Sunshine State, called the University of Florida, her alma mater, to ask if there was a special Bible she could use for the occasion.

Curator Rebecca Jefferson of the university’s Price Library of Judaica had just the book — or books. The library owns a two-volume Hebrew Bible dating to 1814, one of about 100 still remaining that were published in Philadelphia that year using fonts from an older edition printed in Amsterdam. The first volume contains the Torah, or the first five books of the Bible, and the second contains the remaining 19 books. (There are 24 books in the Hebrew Bible, sometimes called the Tanakh.)

At 11 am. Tuesday at the Capitol in Tallahassee, Fried laid her hand on the Hebrew Bible and took the oath of office.

“As the first Jewish woman elected statewide in Florida and an unapologetic Florida Gator I could not be more honored to be sworn in with the first Hebrew Bible printed in the United States from University of Florida’s Judaica Library,” said Fried in a statement. “The symbolism of these firsts represents some of the greatest honors of my life.”

Scriptures have long been used at inaugurations, beginning with George Washington, who picked a Masonic Bible for his ceremony. Last week, Rashida Tlaib, the new Democratic representative from Michigan, and Ilhan Omar, her counterpart from Minnesota, both used Qurans at the swearing-in ceremonies for the 116th Congress.

But scriptures are not formally required.

Kyrsten Sinema, the newly elected U.S. senator from Arizona, used a Library of Congress volume containing the texts of the U.S. and Arizona constitutions for her swearing-in this month. Last year, Mariah Parker was sworn in on a copy of “The Autobiography of Malcolm X” when she took her oath as Athens-Clarke County commissioner in Georgia.

The Hebrew Bible Fried will use was born out of a fierce competition between Jews and Christians for the first U.S. version of the Bible in Hebrew. 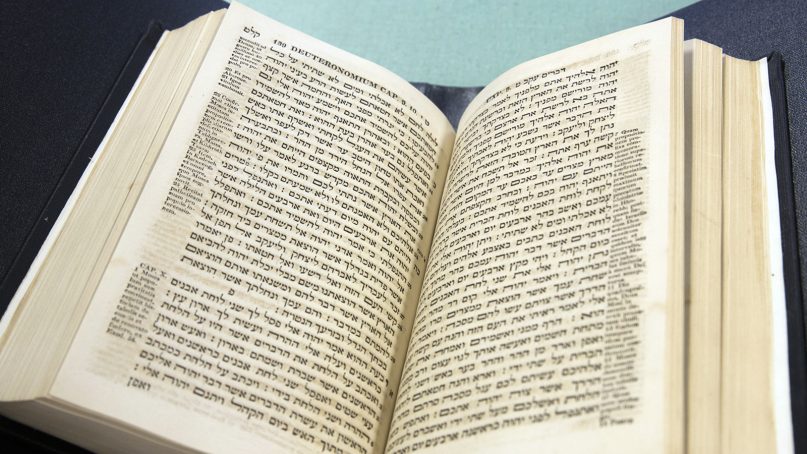 “In the aftermath of the American Revolution there was increased religiosity in the air,” said Jefferson. “Many scholars and clergymen were interested in producing a Hebrew Bible for America. The problem for the Jewish community is that many of the clergy were active in missionary circles and wanted to use (a Hebrew Bible) for conversion. The Jewish community wanted a Bible produced with their approbation.”

The resulting volume came about as a kind of a compromise. Jonathan Horwitz, a Dutch Jewish immigrant, arrived in Philadelphia with the metal blocks or fonts used for a 17th-century edition that had been published in Amsterdam and was widely hailed by Jews of the time.

Eager to get ahead of the competition, Horwitz sold the fonts to Philadelphia printer William Fry, a Christian, and some early subscriptions for the published volumes to a local bookseller. (Then Harvard College and Andover Theological Seminary had already ordered 40 copies each.)

The University of Florida’s Judaica collection dates back to the 1970s, but its volumes haven’t been used for swearing-in purposes before, said Jefferson.

Fried, 2003 graduate of the university and a former president of the student body, is the first to do so.