(RNS) — News of Rev. Bailey Smith’s death Monday turned the clock back to August 22, 1980, when the religious right was being birthed in Dallas at something called the National Affairs Briefing. This was an event that a group of conservative Republican operatives and conservative evangelical clergy had cooked up to turn evangelical lay folk into voters who would boot Jimmy Carter out of the White House.

The high point was an after-dinner appearance by GOP presidential nominee Ronald Reagan, who in a notable fib declared, “I know this is a nonpartisan gathering, and so I know that you cannot endorse me. But I only brought that up because I want you to know that I endorse you, and what you are doing.”

Before Reagan showed up, Smith, pastor of First Southern Baptist Church in Del City, Oklahoma and the newly elected president of the Southern Baptist Convention, had delivered a bit of a homily on religious pluralism in American politics.

It is interesting at great political rallies how you have a Protestant to pray, and then you have a Catholic to pray, and then you have a Jew to pray. With all due respect to those dear people, my friend God Almighty does not hear the prayer of a Jew. For how in the world can God hear the prayer of a man who says that Jesus Christ is not the true Messiah. It is blasphemy. It may be politically expedient, but no one can pray unless he prays through the name of Jesus Christ. It is not Jesus among many, it is Jesus and Jesus only, it is Christ only, there is no competition for Jesus Christ.

No journalist was on hand to report Smith’s remarks, but Milton Tobian of the Southwest region of the American Jewish Committee was, tape recorder in hand, and he prepared a transcript with a memo describing the briefing as “the first major public demonstration” of a movement capable of separating American Jews from “effective participation and influence in American decision making.”

Shortly thereafter the AJC’s director of interreligious affairs in New York, Rabbi Marc Tanenbaum, released the  transcript to the press. It was, Tanenbaum told me in an interview a fews years later, “extremely important to let Bailey Smith and the Bailey Smiths of the world know how offensive this was to us.”

Tanenbaum himself had initiated interfaith discussions with Billy Graham and other evangelical leaders in the mid-1960s. “Our evangelical friends had to know how we felt,” he said, “so they would speak out.”

But this was not your father’s Southern Baptist Convention. In 1979, conservatives had wrested control of the SBC from moderate leaders in a revolution that was part and parcel of the rise of the religious right in the political realm. Although the old guard criticized Smith’s remarks, Tanenbaum’s interlocutor would be the newly prominent Rev. Jerry Falwell (Sr.).

Falwell was at pains to give his political activities an inclusive gloss, christening his just established organization “Moral Majority, Inc.” and embracing the term “Judeo-Christian” to describe the values he was seeking to advance. His initial response to the Smith brouhaha was to fudge.

“I believe that God answers the prayer of any redeemed Gentile or Jew and does not hear the prayers of unredeemed Gentiles or Jews,” he told a reporter. But he allowed as how “redeemed means one who trusts in God through his faith in Jesus Christ.”

After that failed to calm the waters, Falwell decided to pay Tanenbaum a visit, during which which he took a yellow pad and, under the rabbi’s guidance, fashioned a statement that said God “loves everyone alike” and “hears the cry of any sincere person who calls on Him.”

It went on to say that America was and needed to remain “a pluralistic republic” and that “we must never allow” our “differing theological principles” to “separate us as Americans who love and respect each other as united people.”

Meanwhile, Smith, stung by criticism from within his own community, reached out to the ADL, apologizing for any hurt he had caused and expressing “a great desire for better understanding with you and your people.” In due course he would attend a Passover seder at the home of Mark Briskman, the ADL representative in North Texas, who later quoted him as saying that he “would die for your right to live as a Jew in America.”

Smith served two terms as SBC president, and went on to a successful if occasionally controversial career as an evangelist. Never did he take back the words that had gained him his 15 minutes of notoriety. And why should he have?

Devotees of one faith or another have a right to believe that their path is the only true one, and surely there’s something odd in insisting that a religious leader sign on to a view of God that’s not what he believes.

But what Smith did was suggest that there was something inappropriate about having a Jew pray at political rallies in America, that the only people who should be invited to pray are those whose prayers can (according to his lights) get through to God.

If there’s going to be praying at such events (and one can certainly object to it), then a decent respect for the pluralistic nature of American civil society requires an inclusive approach. Auditors are free to believe what they like about the efficacy of any particular prayer. But they shouldn’t be allowed to get away with questioning its presence.

(This post has been changed. An earlier version misstated the name of the city in Oklahoma where First Southern Baptist Church is located.) 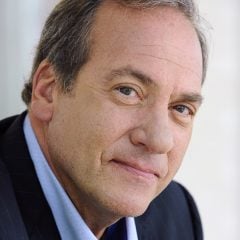 News
Rabbi with a gift for fundraising among evangelicals mourned as friend
Follow us on Facebook!
Submit your photos to RNS