NAIROBI, Kenya (RNS) — Kenyan faith leaders have joined to condemn a terrorist attack in Nairobi that has left at least 14 people dead.

Police say six armed militants stormed into Dusit D2, an upscale business complex in the typically calm Westlands area, on Tuesday (Jan. 15). Flames and plumes of black smoke were seen billowing from the parking area after several vehicles were blown up.

Al-Shabab, the Somalia-based Islamist militant group, said it had carried out the attack, according to news reports.

Roman Catholic Archbishop Philip Anyolo, chairman of the Kenya Catholic Bishops Conference, said people in Kenya had started to believe the period of terror attacks was over.

“I think this is a wake-up call,” Anyolo told Religion News Service in a telephone interview. “The government needs to do more.”

The archbishop urged Kenyans to remain strong and forge ahead together as one united nation. In the recent past, observers have said the militant group wanted to put a wedge between Christians and Muslims in Kenya.

“I want to appeal to those bent on killing their fellow human beings to change their ways. Human life is sacred,” said Anyolo.

Muslim leaders reiterated that such attacks are unacceptable, immoral and inconsistent with human values and ethics. They called for unity among the citizens and the faiths.

Anglican Archbishop Jackson Ole Sapit urged Kenyans to be vigilant and aware that terrorism is a worldwide problem.

“The terrorists have been killing people in the name of God, but I don’t think there is any God who cherishes the killing of innocent people,” said Ole Sapit, while urging people to offer support to those affected.

“Hospitals are asking for blood. Let’s go there and offer support to our fellow citizens,” he said. “Let’s be in prayer.” 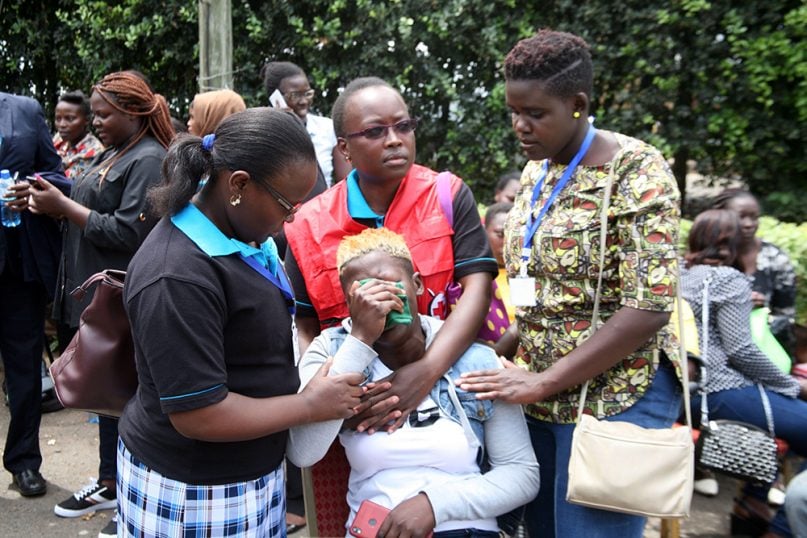 A woman weeps outside Chiromo mortuary in Nairobi, Kenya, after losing a relative in the Dusit attack in Nairobi on Jan. 15, 2019. RNS photo by Fredrick Nzwili

As he announced the end of the security operation on the attack, President Uhuru Kenyatta said Wednesday that the country is grieving.

“This morning my heart, and that of every Kenyan, goes out to the innocent men and women violated by senseless violence,” said Kenyatta.

The complex, which hosts banks and international company offices, is in a part of Nairobi that is typically more secure. Expatriates frequent the luxury hotel in the complex.

Nairobi had not experienced any attacks since five years ago, when al-Shabab was blamed for a series of attacks in the city as well as Mombasa and Garissa. Apart from the northeastern province and the coastal region of Lamu, the rest of the country had remained peaceful.

Police Commissioner Joseph Boinnet said the assailants attacked the complex about 3 p.m. Tuesday and left multiple injuries in addition to the dead.

Scenes of people fleeing with smoke and fire in the background brought back memories of the bloody 2013 al-Shabab terror attack on Westgate, an upscale shopping mall in the same area. More than 67 people were killed in that attack and more than 200 injured.

The attack coincided with the third anniversary of another deadly one in the southern Somalia town of El Adde in which al-Shabab overran a Kenya Defense Forces camp. The death toll from the attack was estimated at 140 soldiers.

Kenya has faced a series of attacks since 2011, when the East African nation sent troops to Somalia to fight the militant group. In 2015, an attack at Garissa University College in northeastern Kenya killed 148 people, mainly Christian students.

News
What four strangers of different faiths learned while living together during a pandemic
News
Priest accused of abetting alleged sex abuse ring is hired by diocesan charity
News
117th Congress, like the old, is overwhelmingly Christian, heavily Protestant
News
Each year 1,000 Pakistani girls forcibly converted to Islam
Islam Beyond Phobia
What Jesus means to me as a Muslim