WASHINGTON (RNS) — The theme of this year’s March for Life, an annual anti-abortion gathering in the nation’s capital, was supposed to be about science: “Unique from Day One: Pro-Life is Pro-Science.”

But as the masses assembled on the National Mall, speakers and attendees seemed more interested in other topics, namely religion and politics.

Politicians in particular were well represented. Vice President Mike Pence made a surprise appearance at the event, striding on stage with his wife, Karen, to address what March for Life president Jeanne Mancini described as possibly the largest crowd in event history.

“It is my privilege to stand with you for life,” Karen Pence said before introducing the vice president, whom she called a “very pro-life person.”

“We’re the Pences and we’re pro-life!” said the vice president, a conservative Christian who also spoke in person at the gathering in 2017. He described the anti-abortion movement as “animated by faith” and said he had the “privilege” of casting the tie-breaking vote in 2017 in the Senate for legislation that targeted funding for Planned Parenthood. Pence also praised President Donald Trump’s appointment of conservative judges to the federal court of appeals.

“The truth is Donald Trump is the most pro-life president in American history,” he said. 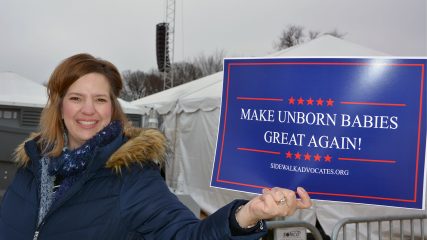 Many signs had a political undertone at the annual March for Life on Jan. 18, 2019, in Washington, D.C. RNS photo by Jack Jenkins

Trump was popular with the sprawling crowd, which erupted with shouts and cheers at the mention of his name. Images of Jesus Christ were held aloft next to participants wearing hats that read “TRUMP 2020.” One sign conflated the president’s favored slogan and the theme of the day: “Make unborn babies great again!”

Pence, too, rolled together the strong faith orientation of the crowd and his boss’s image in his speech, citing scripture such as Jeremiah 1:5 (“Before I formed you in the womb I knew you”) before introducing a video message from Trump.

“As president I will always defend the first right in our Declaration of Independence: the right to life,” Trump said in the clip. He added that his administration supports faith-based adoption services and announced he has signed a letter promising to veto “any legislation … that weakens the protection of human life.”

Later in the program, Sen. Steve Daines (R-Mont.) explained Trump’s announcement was a direct response to a letter sent to the White House earlier this week by 48 anti-abortion senators asking him to back their cause. Daines then declared he has created “the first pro-life caucus” in the history of the U.S. Senate. 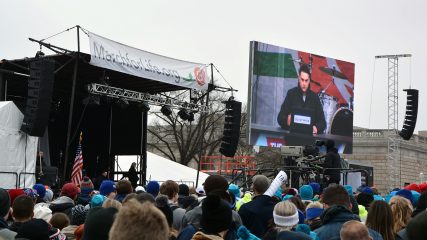 Speakers address the crowd of tens of thousands at the annual March for Life on Jan. 18, 2019, in Washington, D.C. RNS photo by Jack Jenkins

The celebration of the anti-abortion movement’s political gains ignored a setback just 24 hours earlier, when Senate Republicans failed in their effort to approve a permanent ban on federal funding of abortion. The legislation, called the No Taxpayer Funding for Abortion Act, was seen as a largely symbolic effort to coincide with the march, but it ended up exposing the somewhat permeable political lines of the modern abortion debate: Two Democrats, Sens. Bob Casey and Joe Manchin, voted for the measure, while Republican Sens. Susan Collins and Lisa Murkowski voted against it.

And while the March for Life primarily featured speeches from Republicans, organizers also pushed for representation from anti-abortion Democrats, such as Illinois Rep. Dan Lipinski and Louisiana State Rep. Katrina Jackson.

“I tell people when they ask me in my state: ‘Why are you a black, female Democrat fighting for life?’ I say ‘Because I’m a Christian first!’” Jackson said, sparking applause.

The event also showcased two appearances by controversial political commentator Ben Shapiro. The conservative pundit kicked off the event’s morning session with a live recording of his podcast, “The Ben Shapiro Show,” in which he attempted to debunk arguments against the anti-abortion movement before pivoting to a discussion of faith.

“We do have to recognize one religious root to every argument that I make, and that is innate value of human life — that is a religiously based argument,” said Shapiro, who is Jewish. “(God) also gave us the most important verse in the history of humanity: that human beings are made in the image of God. Without that fundamental assumption … none of this matters, and no policy argument matters.” 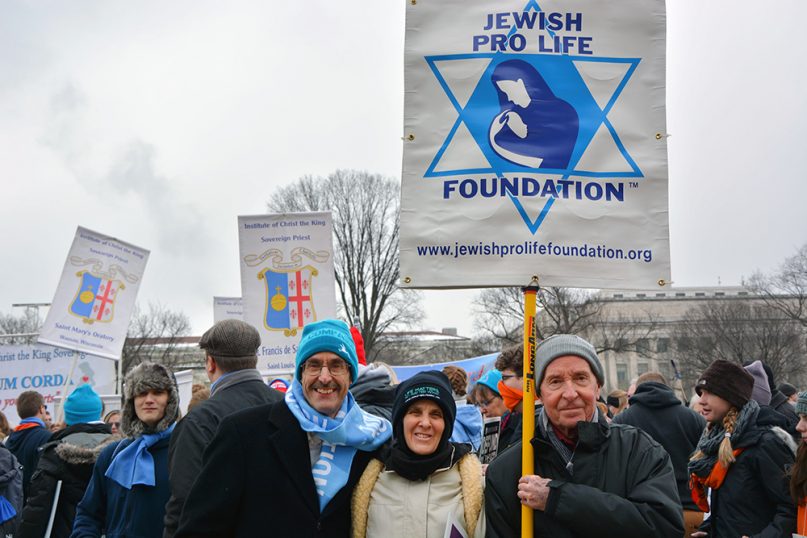 Demonstrators with the Jewish Pro-Life Foundation participate in the annual March for Life on Jan. 18, 2019, in Washington, D.C. RNS photo by Jack Jenkins

Standing in the crowd was Cecily Routman, head of the Jewish Pro-Life Foundation. She told Religion News Service that when Mancini contacted her last year to inquire about possible Jewish voices to bring to the event, she quickly suggested Shapiro.

“His sentiments are well-received on the issue,” said Routman, who had traveled from Pittsburgh with her husband to attend the march.

She insisted that Judaism is “the original pro-life religion,” despite overwhelming support for abortion rights among American Jews, according to Pew Research.

“Somehow our religion has become so corrupted,” she said.

Catholics had the most visible presence at the gathering. Several Vatican flags waved above the crowd, many carried signs referring to their home parish or diocese, and Archbishop Joseph Naumann of Kansas City, Kan., opened the event in prayer alongside representatives from the Orthodox Church. Security at the event was provided by a combination of armed local police and dozens of men in white sports jackets from the Knights of Columbus, a Catholic group.

Standing near the stage was Michele Thomas, who held aloft a cross next to her daughter, Mia, who was adopted from Vietnam. The pair, also from Pittsburgh, said their Catholic faith drives their anti-abortion stance.

“We love women, but we feel that life is the most important thing,” Michele Thomas said. “Christ gave us the opportunity to bring life to earth, and that’s why we’re here.”

The two effectively modeled what has become a rallying cry among anti-abortion activists: that adoption is preferable to abortion.

“If it wasn’t for adoption I wouldn’t be here with the family that I have,” said Mia, a high school senior. “I could have been aborted when I was a baby but I ended up being put up for adoption instead.… You have to kind of let faith take you through life.”