(RNS) — Each week Religion News Service presents a gallery of photos of religious expression around the world. This week’s gallery includes celebrations from the Kumbh Mela festival in India, animal blessings for the feast of Saint Anthony, and more. 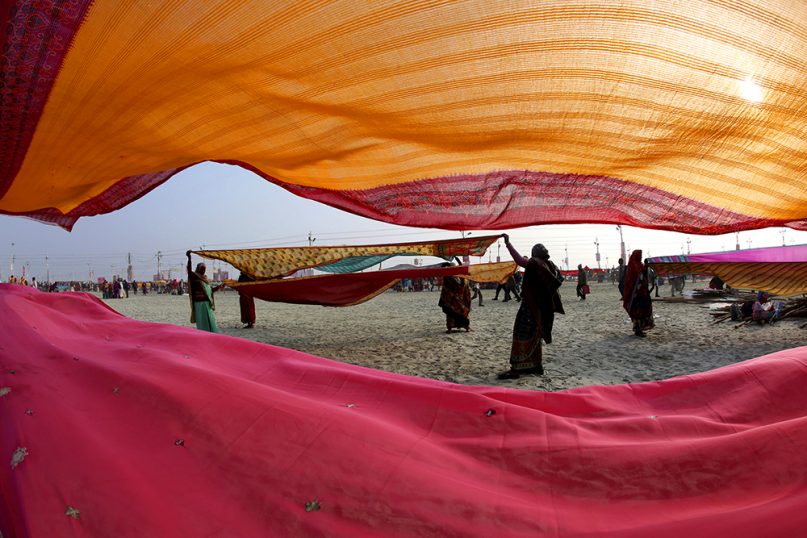 Hindu devotees dry their clothes after taking spiritually cleansing dips in the Sangam, the confluence of the rivers Ganges, Yamuna, and the mythical Saraswati during the Kumbh Mela festival, in Allahabad, India, on Jan. 14, 2019. India’s Hindu nationalist-led government is splurging on a religious mega-fest, spending unprecedented sums as part of a strategy to focus on the country’s majority Hindu population ahead of a general election due this year. (AP Photo/Rajesh Kumar Singh) A man rides a horse through a bonfire as part of a ritual in honor of Saint Anthony the Abbot, the patron saint of domestic animals, in San Bartolome de Pinares, Spain, on Jan. 16, 2019. On the eve of Saint Anthony’s Day, dozens ride their horses through the narrow cobblestone streets of the small village of San Bartolome during the “Luminarias,” a tradition that dates back 500 years and is meant to purify the animals with the smoke of the bonfires and protect them for the year to come. (AP Photo/Felipe Dana) 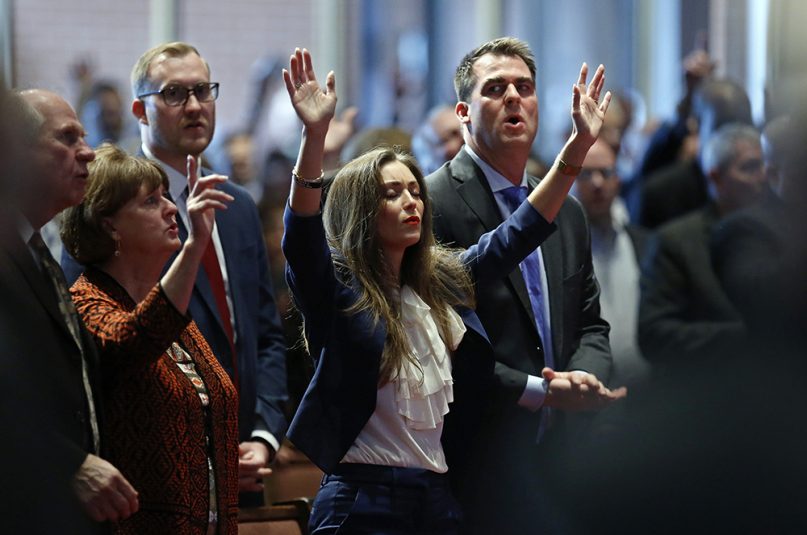 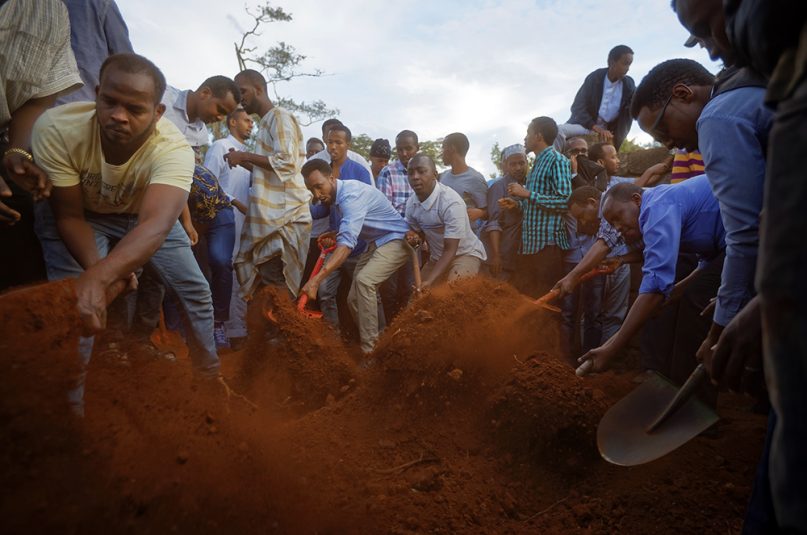 Mourners bury the body of Abdalla Dahir near the grave of his colleague Feisal Ahmed, who were both killed in Tuesday’s attack by Islamic extremist gunmen on a luxury hotel and shopping complex in Nairobi, Kenya, on Wednesday, Jan. 16, 2019. The two worked for the Somalia Stability Fund, managed by the London-based company Adam Smith International, at the complex. (AP Photo/Ben Curtis) 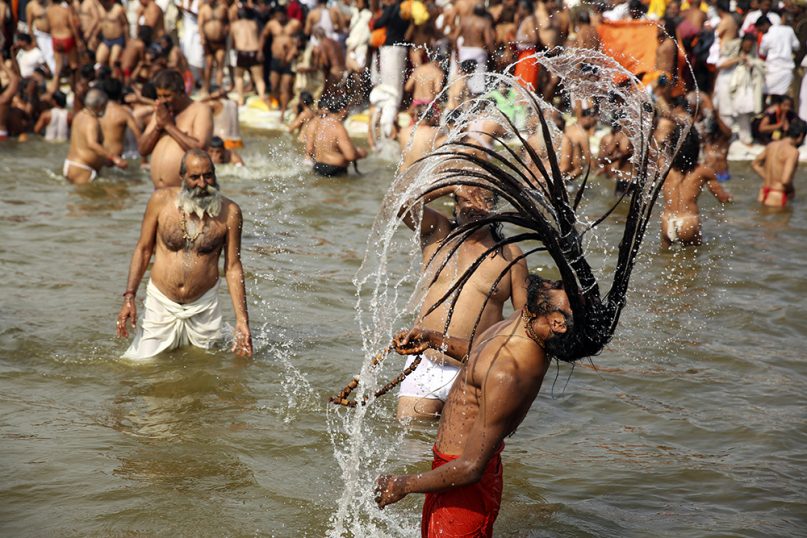 Hindus take ritualistic dips on the auspicious Makar Sankranti day during the Kumbh Mela, or pitcher festival, in Prayagraj, Uttar Pradesh state, India, on Jan. 15, 2019. The Kumbh Mela is a series of ritual baths by Hindu holy men, and other pilgrims at the confluence of three sacred rivers — the Yamuna, the Ganges and the mythical Saraswati — that dates back to at least medieval times. The city’s Mughal-era name Allahabad was recently changed to Prayagraj. (AP Photo/Rajesh Kumar Singh) 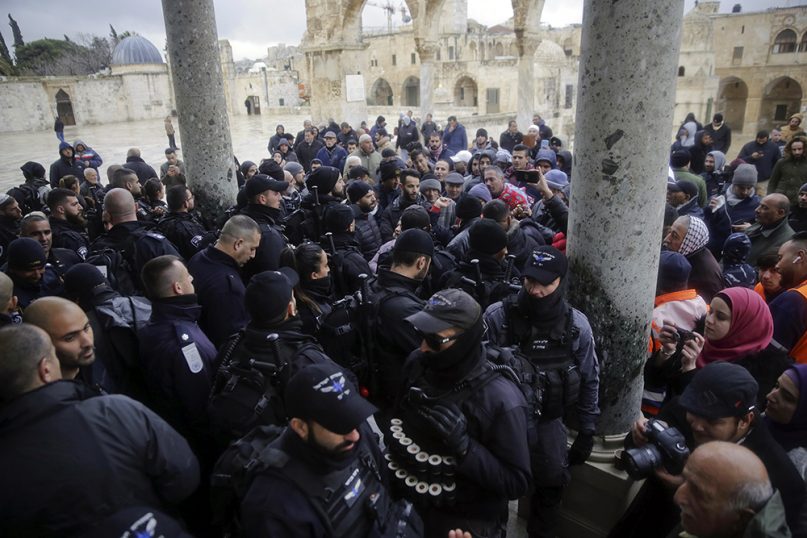 Israeli police stand at the door to the Dome of the Rock mosque, confronted by Palestinians, on Jan. 14, 2019. Scuffles broke out at the Dome of the Rock in Jerusalem’s Old City on Monday after guards at the mosque refused to allow an Israeli policeman to enter for a routine security check because he was wearing a Jewish skullcap known as a kippah. (AP Photo/Mahmoud Illean) 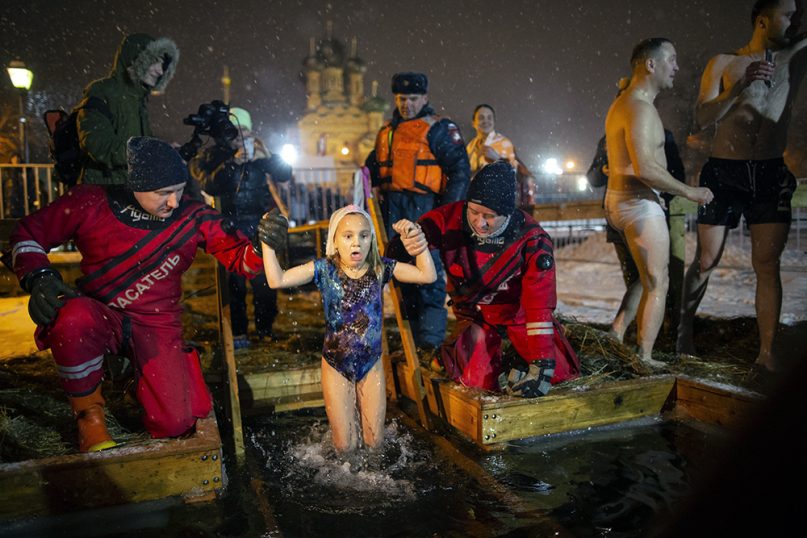 Russian Emergency Situations employees help a young girl into icy water on Epiphany at the Church of the Holy Trinity in Ostankino in Moscow, Russia, on Jan. 18, 2019. Across Russia, the devout and the daring observed the Orthodox Christian feast day by immersing themselves in frigid water through holes cut through the ice of lakes and rivers. Epiphany celebrates the revelation of Jesus Christ as the incarnation of God through his baptism in the River Jordan. (AP Photo/Alexander Zemlianichenko) 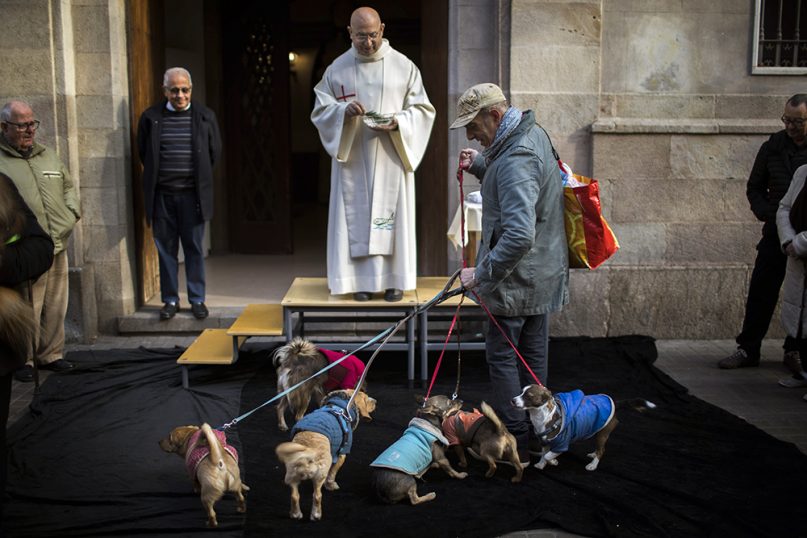 A man brings his six dogs to be blessed, during the feast of Saint Anthony, Spain’s patron saint of animals, in Barcelona, Spain, on Jan. 17, 2019. The feast is celebrated each year in many parts of Spain and people bring their animals to churches to be blessed. (AP Photo/Emilio Morenatti) A man offers a prayer at the Swayambhunath Stupa, an ancient religious complex atop a hill, in Kathmandu, Nepal, on Jan. 13, 2019. The complex is also known as the monkey temple, due to the number of monkeys inhabiting the area. (AP Photo/Niranjan Shrestha) 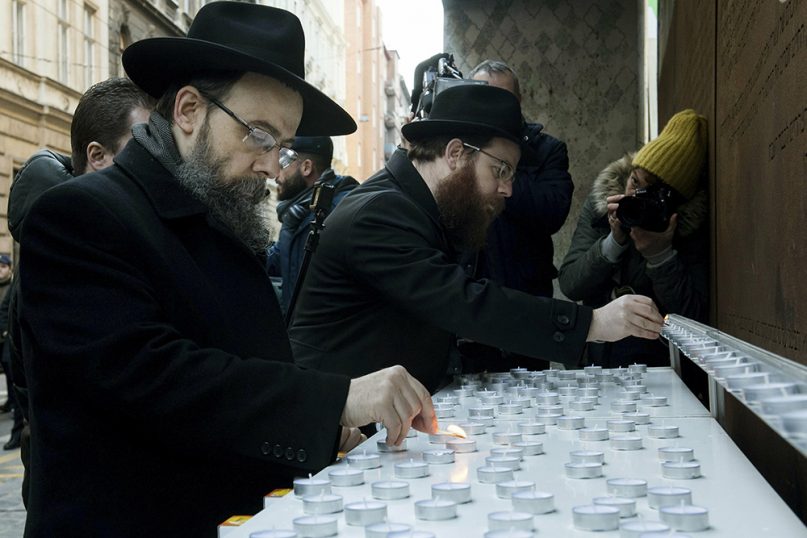 Rabbi Oberlander Baruch,  left, head of the Hungarian Chabad-Lubavitch movement, and Unified Israelite Congregation of Hungary (EMIH) chief rabbi Slomo Koves, right, light candles outside the Dohany Street synagogue in Budapest, Hungary, on Jan. 17, 2019, during a ceremony commemorating the 74th anniversary of the liberation of the Budapest Jewish ghetto. The ghetto was liberated by the Soviet Red Army on Jan. 17, 1945, during World War II. (Szilard Koszticsak/MTI via AP) 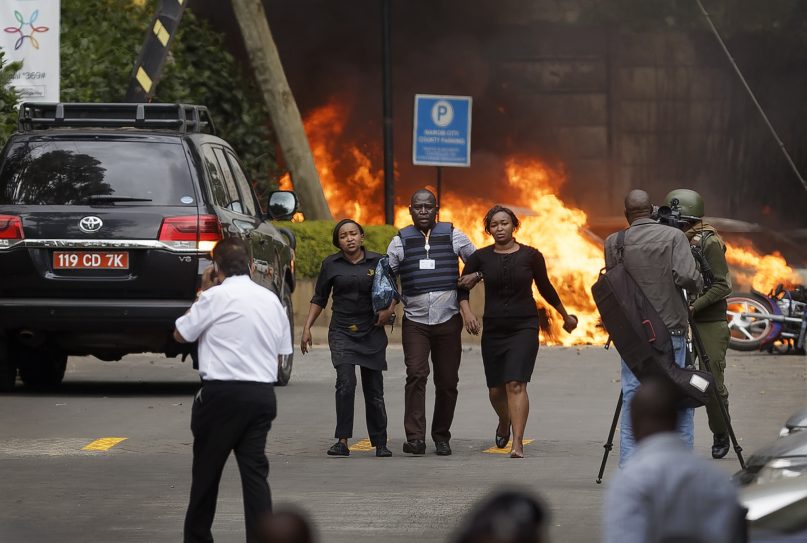 Security forces help civilians flee the scene of a terrorist attack as cars burn in the background at a hotel complex in Nairobi, Kenya, on Jan. 15, 2019. Extremists launched an attack on a luxury hotel in Kenya’s capital, sending people fleeing in panic as explosions and heavy gunfire reverberated through the neighborhood. Al-Shabab, the Somalia-based extremist group, has claimed responsibility. (AP Photo/Ben Curtis)