WASHINGTON (RNS) — Hours before post-shutdown conversations began on immigration and border security on Capitol Hill, House Speaker Nancy Pelosi told a group of Christian educators gathering in the nation’s capital this week that she intends to uphold her responsibility to “act upon our beliefs in the dignity and worth of every person.”

Those people include refugees seeking to cross our borders, Pelosi told the Presidents Conference of the Council for Christian Colleges and Universities on Wednesday (Jan. 30).

“We’re hoping that we can find common ground as soon as possible so that we can not only meet the responsibility to protect our border and treat people coming here with dignity and respect but also to keep government open,” she said.

The opening session of the three-day CCCU conference, held at the Dirksen Senate Office Building, also featured a talk with Secretary of Education Betsy DeVos. Both spoke of their faith as an integral part of their work as government leaders.

Pelosi said she hopes decision-makers on both sides of the debate over the wall at the Southern border can agree on funding for key needs in Latin America as well as the U.S.: food and medical care for people crossing the border, assistance for the countries from which they are fleeing and additional federal judges to adjudicate their cases. 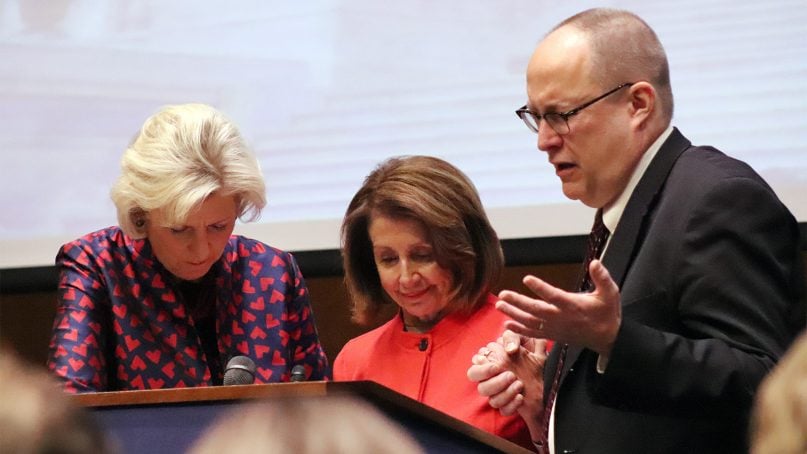 Galen Carey, right, vice president of government relations of the National Association of Evangelicals, prays for Nancy Pelosi, center, after she made remarks, with Shirley V. Hoogstra, left, president of the Council for Christian Colleges and Universities, on Jan. 30, 2019, at Dirksen Senate Office Building in Washington. RNS photo by Adelle M. Banks

“One of the things that we have to convey to the administration is that these people do have a right under international law and any sense of decency to seek refuge in our country,” she said of those wanting to enter the U.S. “This administration is really a departure from the bipartisanship that has always existed, the recognition of who we are — by and large, a nation of immigrants, unless we are blessed to have been born into a Native American family.”

She added that while the U.S. should investigate refugees’ claims of persecution, “it isn’t against the law for them to come into America to have that test made.”

Pelosi noted that she had long worked with evangelicals on comprehensive immigration reform.

“The evangelical community has been in the lead on this for a long, long time,” she said.

Pelosi opened and closed her remarks with words about faith, referring first to Paul’s teaching on faith, hope and charity in his First Letter to the Corinthians, and concluding with a mention of her belief in Jesus.

“Christ is our savior,” said Pelosi, a Roman Catholic. “And his example is such a blessing to the world.”

DeVos, speaking just before Pelosi, answered questions from CCCU President Shirley V. Hoogstra about DeVos’ proposed reforms to the accreditation process, possible new rules about addressing sexual assault on campuses and how the secretary’s faith plays a role in her leadership. 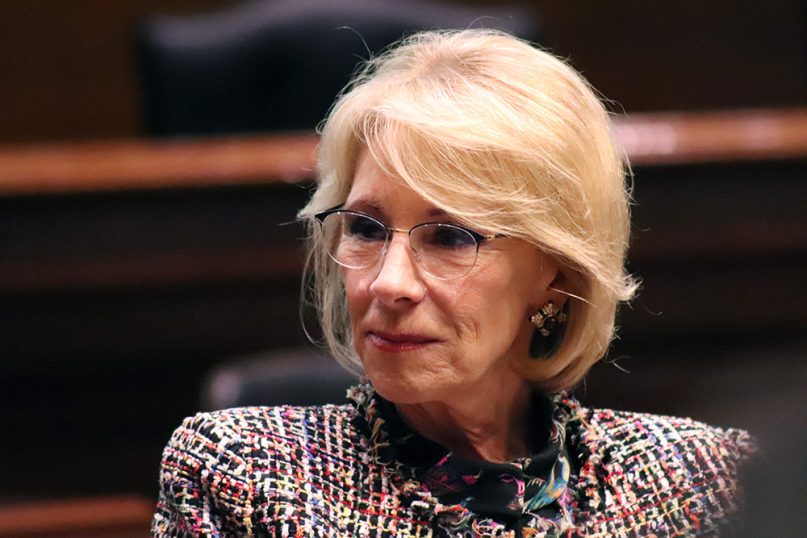 DeVos spoke on the last day her department is receiving comments on proposed new rules about Title IX, the section of federal law that bans schools that get federal funds from discriminating on the basis of sex. She said she had been involved in  separate listening sessions featuring assault victims, accused perpetrators and academics.

“The fundamental focus, from my perspective, is ensuring that we are being fair and balanced for all students,” DeVos said. “One sexual assault is one too many and we need to move to a place where we are educating and assuring that those horrible situations don’t occur. But when they do, we need to have a process and a framework that is fair for everyone and that the results can be counted upon by everyone involved.”

Some have criticized the proposed rules, saying they could lead victims of sexual assault to not come forward.

Asked by Hoogstra how she deals in general with criticism and praise for her efforts to change education policy, DeVos spoke of her parents’ entrepreneurial spirit, her Christian education and her faith in God.

“There’s an audience that I play to and it’s just an audience of one,” she responded, speaking from a wheelchair after breaking her pelvis and a hip socket in a December bicycling accident.

DeVos, who was raised in the Christian Reformed Church in North America and has been a member and elder at Mars Hill Bible Church in Grandville, Mich., said faith infuses her life.

“That’s where I live from,” she said. “There is nothing I do that my faith perspective doesn’t inform in some way.” 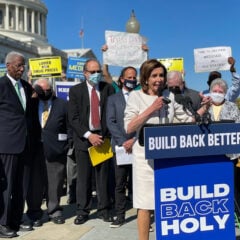