(RNS) — Each week Religion News Service presents a gallery of photos of religious expression around the world. This week’s gallery includes new naked men in India, a new king in Malaysia, a new church in Cuba and a Lunar New Year. 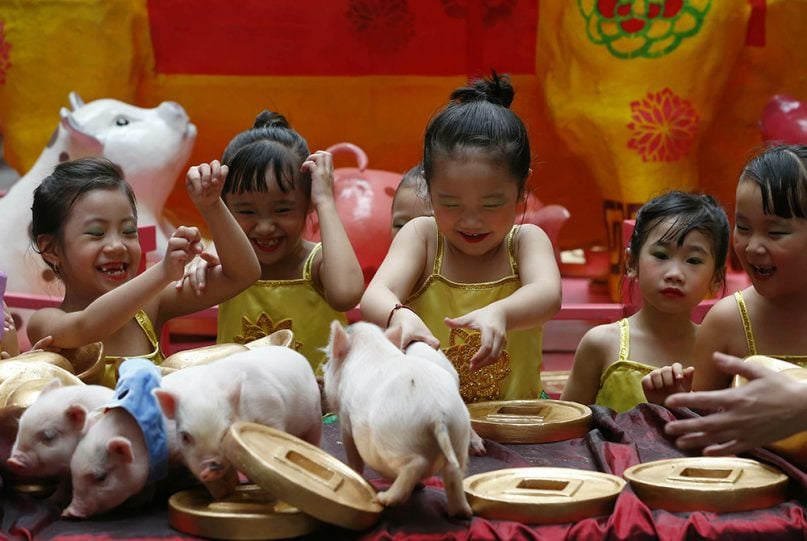 Girls play with live Teacup pigs, a rare pet in the country, at the start of celebrations leading to the Lunar New Year on Feb. 1, 2019, at Manila’s Lucky Chinatown Plaza in Manila, Philippines. This year is the Year of the Pig on the Chinese Lunar calendar and is supposed to represent abundance, diligence and generosity. The Lunar New Year traditions are heavily influenced by Confucianism, Buddhism and Taoism. (AP Photo/Bullit Marquez) 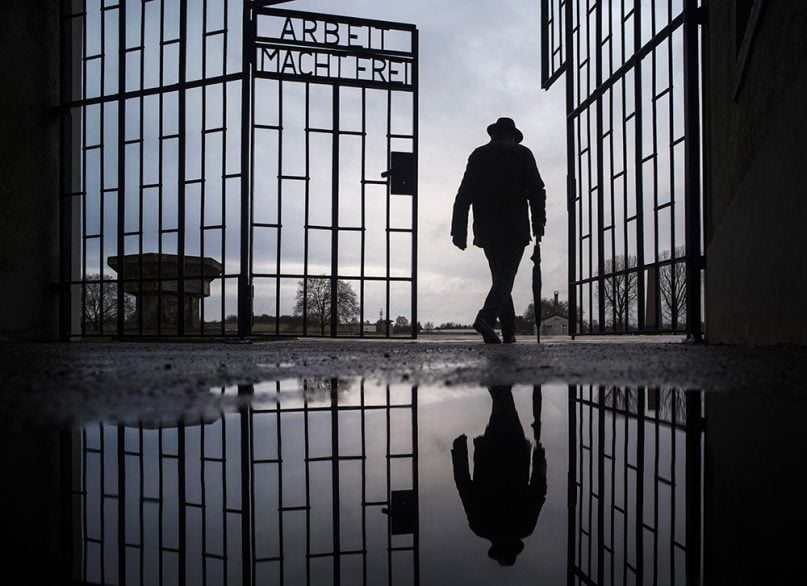 A man walks through the gate of the Sachsenhausen Nazi death camp with the phrase ‘Arbeit macht frei’ (work sets you free) during the International Holocaust Remembrance Day, in Oranienburg near Berlin, Germany, on Jan. 27, 2019. The International Holocaust Remembrance Day marks the liberation of the Auschwitz Nazi death camp on Jan. 27, 1945. (AP Photo/Markus Schreiber) 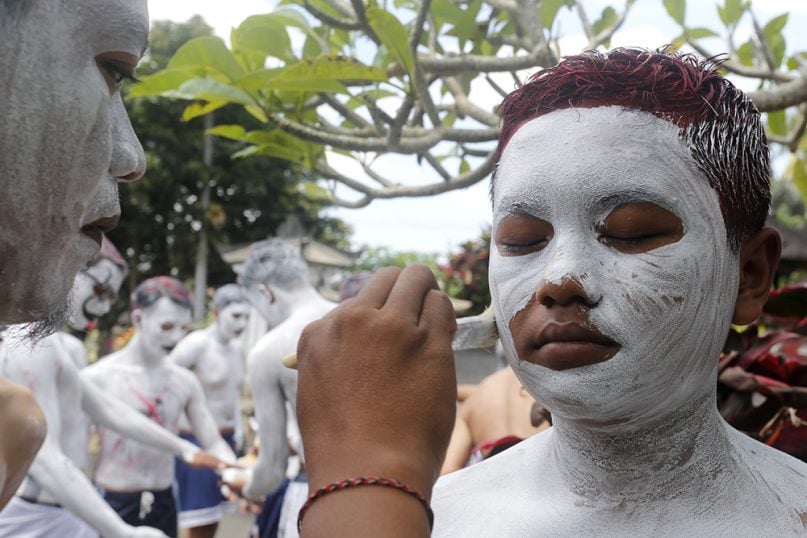 Young Balinese paint themselves in preparation for the Hindu ritual called “Grebeg” at the Tegalalang village in Bali, Indonesia, on Jan. 30, 2019. In the biannual ritual, young participants paint their bodies and parade around their village to ward off evil spirits. (AP Photo/Firdia Lisnawati) 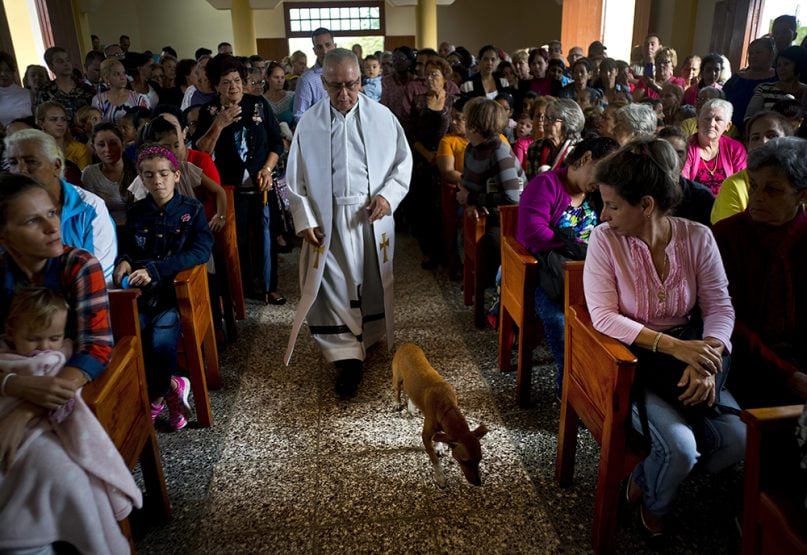 Father Cirilo Castro follows a stray dog during the consecration Mass of the Sagrado Corazon de Jesus Catholic Church in Sandino, Cuba, on Jan. 26, 2019. The parish is one of three Catholic churches that the Cuban government authorized to be built and the first of the three to be finished, with the help of Tampa’s St. Lawrence Catholic Church in Florida. (AP Photo/Ramon Espinosa) 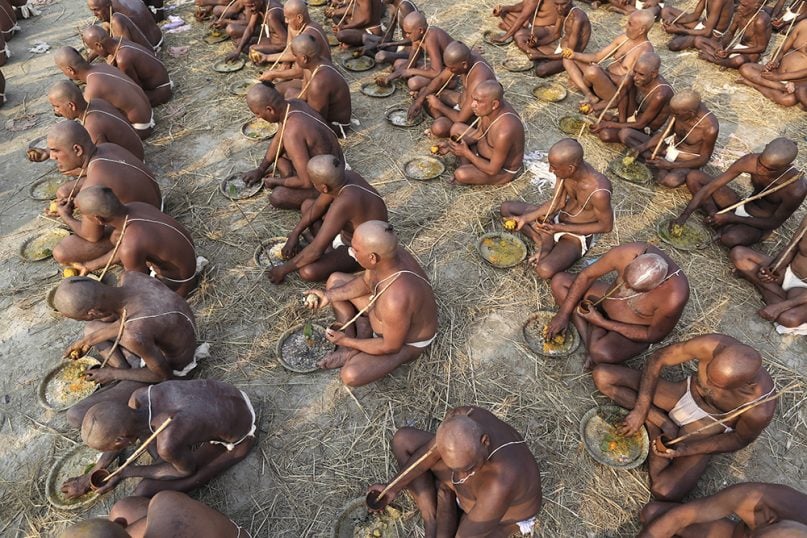 Hindu holy men participate in rituals that are believed to rid them of all ties to this life and dedicate themselves to serving God as a ‘Naga’ or naked holy man, at Sangam, the confluence of the Ganges and Yamuna River during the Kumbh festival in Prayagraj, India, on Feb. 1, 2019. The significance of nakedness is that they will not have any worldly ties to material belongings, not even something as simple as clothing. This ritual that transforms selected holy men to Naga can only be done at the Kumbh festival. (AP Photo/ Rajesh Kumar Singh) 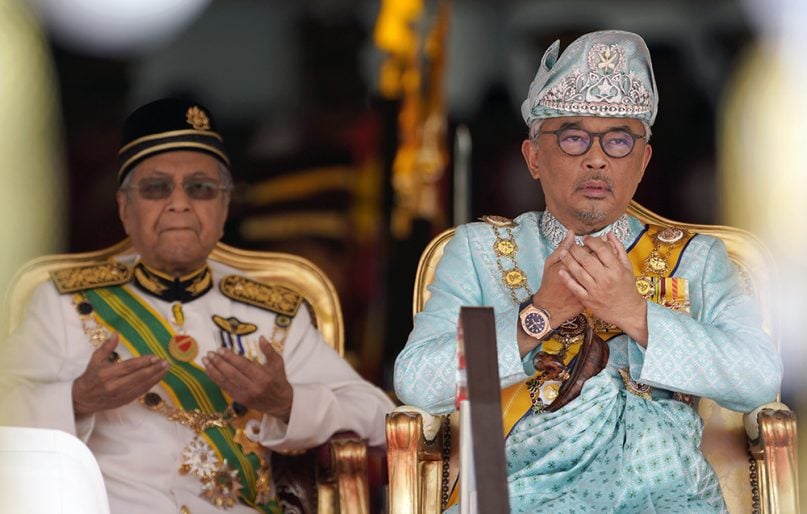 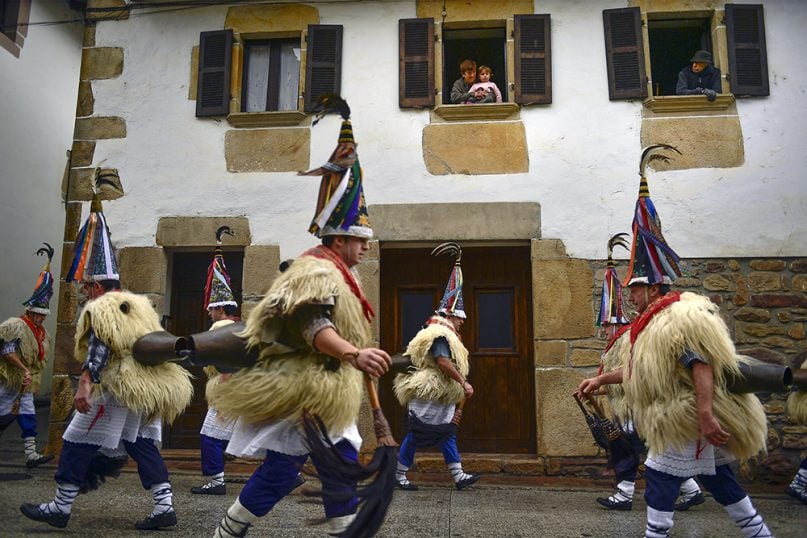 A group of Joaldunaks take part in the Carnival between the Pyrenees villages of Ituren and Zubieta, northern Spain, on Jan. 28, 2019. In one of the most ancient carnivals in Europe, dating from before the Roman Empire, companies of Joaldunak (cowbells) made up of residents of two towns, Ituren and Zubieta, parade the streets costumed in sandals, lace petticoats, sheepskins around the waist and shoulders, colored neckerchiefs, conical caps with ribbons and a hyssop of horsehair in their right hands and cowbells hung across their lower back. Believed to be based in mysticism, lore says that Joaldunak protect cattle, chase away evil spirits and lead to good harvests. (AP Photo/Alvaro Barrientos) 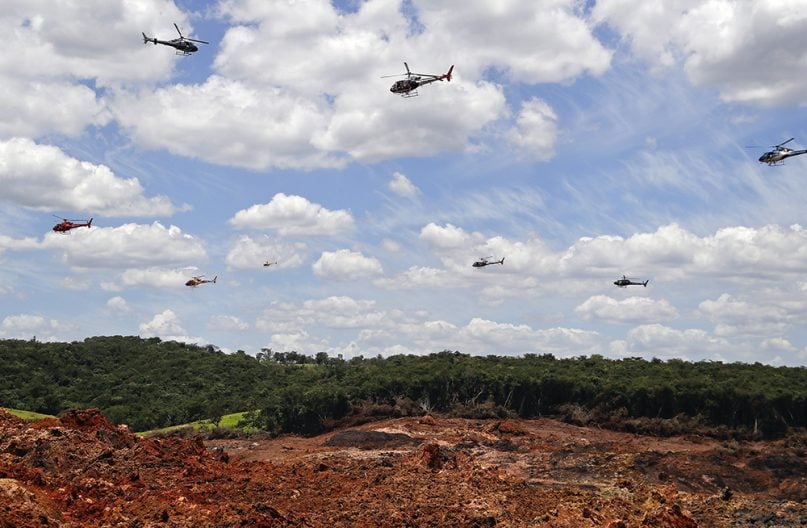 Helicopters hover over an iron ore mining complex to release thousands of flower petals paying homage to the 110 victims killed and 238 who are still missing after a mining dam collapsed there a week ago, in Brumadinho, Brazil, Feb. 1, 2019. The tragedy also stoked protests from Brazilian indigenous groups who contest the misuse and clearing of indigenous lands, often on religious grounds. (AP Photo/Andre Penner) Volunteers sweep the ancient Buddhist pagodas of Naypyitaw, Myanmar, on Jan. 27, 2019. The pagodas in the country’s capital were built 160 years ago during the Konbaung and Amarapura dynasties. (AP Photo/Aung Shine Oo) Journalists standing on a press stand are silhouetted against the morning sky as they wait for the arrival of Pope Francis to celebrate an early Mass at the metro park Campo San Juan Pablo II in Panama City on Jan. 27, 2019. The Mass marked the formal end to World Youth Day, the once-every-three-year religious festival that John Paul initiated during his quarter-century pontificate. (AP Photo/Alessandra Tarantino)