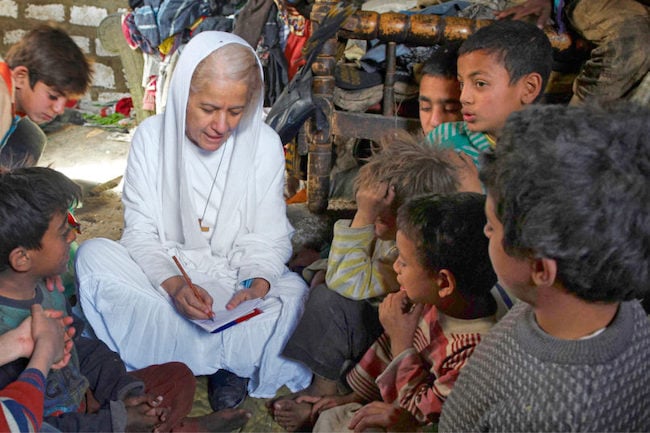 Journalists and researchers profile 100 people committed to humanitarian causes around the world.

The Center for Religion and Civic Culture (CRCC) at the University of Southern California is embarking on an ambitious project to tell 100 stories of exemplary individuals inspired by their spirituality to engage in humanitarian work.

A $3 million project with funding from the John Templeton Foundation and the Templeton Religion Trust, “Spiritual Exemplars: A Global Project on Engaged Spirituality” will allow CRCC to expand its knowledge on the role of religion in the public sphere and create a new field of study around these extraordinary people.

“Spiritual exemplars bring a compelling and inspiring window into the many ways that spiritually-inspired commitments can yield personal and even social transformation,” said Kimon Sargeant, vice president of programming at the John Templeton Foundation. “Sometimes these exemplars are hidden in plain sight; many others are truly unknown. What they all have in common is that their lives and their work show us what the best of humanity can be.”

Over the course of three years, a team of researchers and journalists will create written and multimedia profiles of people motivated and sustained by their spirituality to address issues of poverty, human rights and other humanitarian concerns.

The exemplars profiled will include the likes of Maggie Gobran, whose organization serves 32,000 families living in Egypt’s garbage slums. Donald E. Miller, the lead investigator on the project and CRCC’s director of strategic initiatives, first met “Mama Maggie,” through another research project in 2001 and recently created a 15-minute documentary about her.

Since its inception following the 1992 civil unrest in Los Angeles, CRCC has studied the role of religion in transforming communities locally and globally. The Spiritual Exemplar project builds upon this expertise by focusing on the engaged spirituality of exceptional individuals.

CRCC crafted five criteria for the people they will profile:

-A living individual located anywhere in the world
-Inspired and sustained by spiritual values, beliefs or practices
-Significant impact that advances human flourishing
-Admired and emulated by others within and beyond their community
-Respects human rights, such as those defined by the Universal Declaration of Human Rights

CRCC will choose a diverse set of exemplars from an initial list of more than 100 people and additional nominations from researchers, journalists and the public. As a global project, CRCC aims to study exemplars across geographies, races and religions, including individuals who do not adhere to a particular tradition.

As a collaborator on the project, the Aurora Humanitarian Initiative has nominated Aurora Prize finalists. The finalists to be profiled include 2017 Aurora Prize Laureate Tom Catena, the only doctor based in Sudan’s Nuba mountain region; and 2017 Aurora Humanitarians Jamila Afghani, who brings education to girls and women in Afghanistan; and Dr. Denis Mukwege, whose dedication to addressing sexual violence in the Democratic Republic of Congo earned him the 2018 Nobel Peace Prize.

CRCC aims to create an academic field around the study of spiritual exemplars, building upon psychological studies of “moral exemplars.” Recent research indicates that 80 percent of individuals involved in human development projects, including disaster relief and long-term social interventions, are informed by spiritual values and practices.

“The study of ‘exemplars’ is a relatively new field in the social sciences,” Miller said. “We want to know how religion and spirituality operate within exemplars’ lives and the communities with which they work.”

“At the same time, working with journalists will allow us to extend this conversation into the public sphere,” he added.

“We hope to tell exemplars’ stories in accessible ways so that they can inspire others,” Miller said.

More information about the project, the nomination form and application for journalists can be found here.