LONDON (RNS) — Three bishops from the Episcopal Diocese of New York have written an open letter to their clergy and parishioners to express their dismay at a request by the archbishop of Canterbury that two gay bishops not bring their spouses to the Anglican Communion’s Lambeth Conference in July of 2020.

The letter also explains why, despite consideration of boycotting the meeting, all three New York bishops will attend. “We have concluded that we cannot in conscience remove the voice of the Diocese of New York from the larger conversations at Lambeth,” the letter reads, “regarding sexuality and the inclusion of LGBTQ people in the full sacramental life of the church.”

The Lambeth Conference convenes bishops from the worldwide Anglican Communion once a decade in Canterbury, England. The issue of homosexuality has dominated the last two gatherings, exposing deep differences between bishops from the global South and the U.S. and Canada. 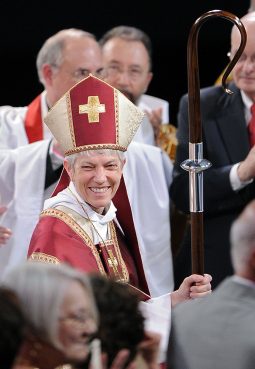 One of the two sitting bishops affected by Archbishop Welby’s decision, Mary Glasspool, is an assistant bishop in the New York diocese. The first lesbian to be named a bishop in the Anglican Communion, she is married to Becki Sander. Kevin Robertson, suffragan bishop since 2016 in the Toronto diocese of the Church of Canada, married his longtime partner, Mohan Sharma, in December. The husband of Rev. Thomas Brown, slated to be consecrated as a bishop in the diocese of Maine in June, will also not be invited.

The letter was signed by Glasspool as well as Bishop Andrew L. Dietsch and the diocese’s suffragan bishop, Allen K. Shin.

The archbishop of Canterbury reportedly contacted Glasspool before Christmas to inform her of his position and express his regret at the pain it may cause.

Robertson told Religion News Service he was profoundly disappointed but not surprised to learn that Sharma was not invited to the conference. He said he was grateful to have had a 20-minute meeting with Archbishop Welby in London last month. “The archbishop said to me that if he invited same-sex spouses to the Lambeth Conference there wouldn’t be a conference at all. I think he felt that it would be a step too far for some of the bishops if they were to attend.”

The decision came to public attention when Anglican Secretary General Josiah Idowu-Fearon posted the news on the communion’s website in mid-February. “The invitation process has needed to take account of the Anglican Communion’s position on marriage which is that it is the lifelong union of a man and a woman,” he wrote, citing Resolution 1.10 of the 1998 Lambeth Conference.

“Given this,” the post said, “it would be inappropriate for same-sex spouses to be invited to the conference.”

Idowu-Fearon said it was up to individual provinces to appoint their own bishops, and, therefore, all bishops currently serving in the Anglican Communion were being invited to the conference, an allusion to the fact that Gene Robinson, the former bishop of New Hampshire and first openly gay and partnered bishop in the Anglican Communion, had been barred from the last Lambeth Conference in 2008.

Simon Sarmiento, chair of the Church of England advocacy group LGBTI Mission, said, “It is bizarre to invite same-sex married bishops while excluding their spouses. This action fails on every count. It will be seen in England as pure homophobia, and it will do nothing to appease those bishops who refuse to view same-sex relationships as anything other than sinful.”

“I wonder who the archbishop would uninvite if he was serious about the Anglican Communion’s opposition to homophobia,” Sarmiento added.

The decision has provoked soul searching among some liberal-leaning bishops. Paul Bayes, the bishop of Liverpool, announced on Twitter that his wife would decline her invitation to the conference in an act of solidarity with gay spouses.

“I deeply regret that in the fractious complexities of our life as a worldwide people this act of exclusion has taken place,” said Bayes. “It is a grief to me and to my wife and to many others. Despite this I aim to attend the conference, alone, in the hope of a common future.”

The New York bishops stressed that they are attending as representatives of their flocks. While the letter says the topic will “occupy some of our time” when the American church’s bishops meet in North Carolina later this month, they wrote, “We go to Lambeth so that you will be at Lambeth.” 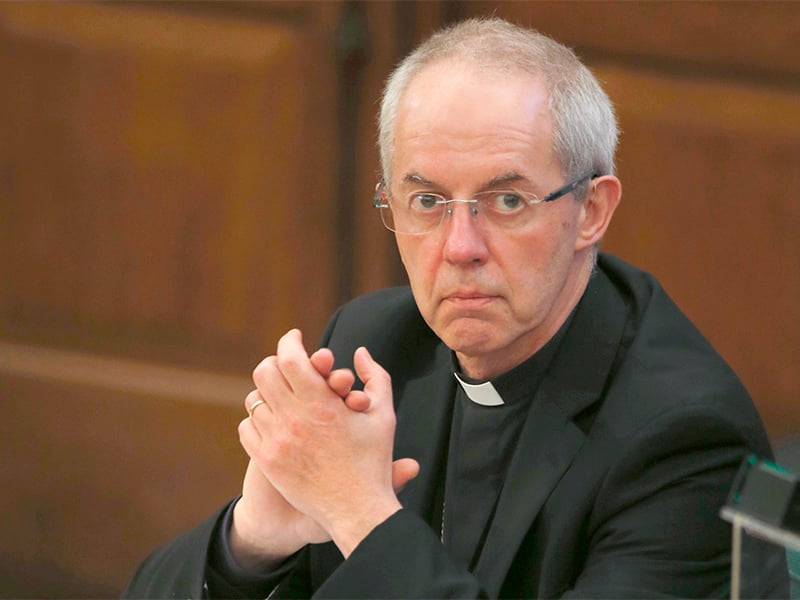 Archbishop of Canterbury Justin Welby listens to debate at the General Synod in London on Feb. 13, 2017. (AP Photo/Alastair Grant)

Many bishops belonging to the traditionalist Global Anglican Future Conference, known as GAFCON, have already decided to boycott the conference to protest the fact that Episcopal Church USA, the Church of Canada and the Scottish Episcopal Church have voted to allow same-sex marriage in recent years. No bishops from Rwanda, Nigeria or Uganda will be attending Lambeth 2020, and many from other African, Asian and South American provinces are also expected to stay away.

Canon Andrew Symes, executive secretary of Anglican Mainstream, which calls itself a “voice for orthodox Anglican faith,” said the archbishop of Canterbury faced an unavoidable dilemma once the Episcopal Church approved same-sex marriage.

“Despite promises that there would be ‘consequences’ for this, they never materialized,” Symes said. “The liberal churches continued their program, causing further division with those with more conservative views.”

Symes continued, “The problem is not primarily with individuals, but a church leadership culture which has gone against what the Anglican Communion has decided and developed a different understanding of Christian teaching.

“Not inviting spouses addresses the problem in the wrong way and penalizes individuals. This situation is inevitable when large, powerful churches disregard the historic teaching from the Bible which they have inherited, and the democratic view of the Church as a whole.”

Bishop Robertson said he will also attend the conference, but no decision has yet been taken about whether Sharma will accompany him to Canterbury. “He would be peering in from the outside, and that would be difficult for him and for me and for many other people.”

The New York delegation’s letter makes it clear that all three bishops’ spouses will go to England, even though Sander “will not be permitted to participate in the Lambeth conversations and activities,” the letter reads, adding, “Margaret Dietsche and Clara Mun are also planning to go to England, to stand with Becki.”