(RNS) — Talk of schism in the United Methodist Church has prompted me to revisit the research I did in the 1980s as the Southern Baptist Convention was being transformed into the monolithically conservative body it is today. I wanted to know: How does a denomination arrive at and move through a split?

What I wrote about in my 1990 book, “Baptist Battles,” may just have some enduring lessons for what we are seeing now.

Nearly a century ago, H. Richard Niebuhr wrote “The Social Sources of Denominationalism,” and my research confirmed his contention that differences over theology or practice are rarely enough to split a denomination. The argument has to tap deeper social divisions.

It’s not that theology doesn’t matter. The Southern Baptist argument was begun by conservatives who claimed an inerrantist view of the Bible. They also definitely disapproved of the growing number of ordained women in progressive SBC churches. These were real theological differences between the parties, just as there are today between the traditional and progressive Methodists.

Those groups’ differences were also social and political, however. Southern Baptist progressives — they called themselves moderates — were more likely to come from cities, to value seminary-educated clergy and to favor women’s and minority rights. Conservatives opposed abortion and welfare and were strongly anti-communist (remember, this was the ’80s). They were more likely to have moved from rural to urban areas and to be somewhat less well-off. The Rev. Austin Adkinson, right, and members of the Queer Clergy Caucus sing and greet attendees on the first day of the special session of the United Methodist Church General Conference in St. Louis on Feb. 24, 2019. RNS photo by Emily McFarlan Miller

In a very large denomination, spread out across the country, even such socially different groups can coexist for a long time without a split. A split also requires an organized movement to “call the question.” That’s what happened to Baptists in the 1980s, and that is what has happened to Methodists over the last decade.

Now that the Methodists have reached the precipice, the very complicated organizational work of division has to get underway, and one thing is sure: Nothing will happen quickly. Whatever division happens will unfold at multiple levels over at least a decade. Denominations aren’t just individuals who share (or formerly share) a theology. They are complex organizations with national bureaucracies, regional branch offices, local congregations and individual members. Each of those parts of the whole will come apart in different ways.

How that happens is determined by the denomination’s “polity,” that is, the way it governs itself. Baptists don’t have bishops, but Methodists do. That means that it is harder for Methodist congregations or clergy members simply to do what they individually think is right. Most critically, Methodist connectional polity means that the congregation doesn’t own its property — although this recent conference seems to have opened the way for churches to leave without giving up their buildings.

Even denominations without bishops, however, have extensive national organizations with lots of influence over what happens in local churches. They develop programs, publish literature, organize mission efforts and educate clergy. 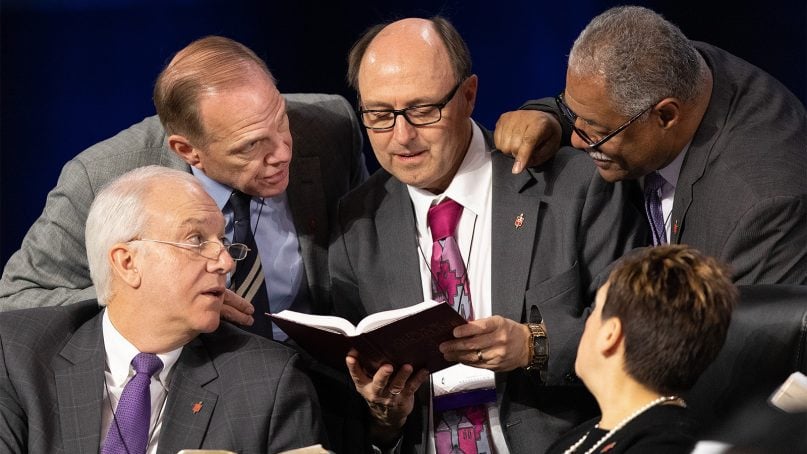 Bishops confer over the issue of whether the legislative committee can refer items to the denomination’s Judicial Council for review during the 2019 United Methodist General Conference in St. Louis on Feb. 25, 2019. Clockwise from lower left are Bishops Thomas Bickerton, John Schol, David Bard, Julius C. Trimble and Cynthia Fierro Harvey. Photo by Mike DuBose/UMNS

The conservatives who took over the SBC knew that this connective tissue was their real target. They replaced members of the governing boards, then replaced the staff and eventually transformed all the national institutions into supporters of conservative theological (and political) causes. If traditionalist Methodists prevail and progressive ones leave, we can expect to see just such a slow but inevitable transformation of their national bodies.

We may also expect to see a few Methodist organizations declare independence. Among Baptists, Baylor University’s cutting of its official Baptist ties was the most noted such move. For Methodists, some of the theological schools – especially those lodged in universities – may follow that path. It means developing new funding streams, of course, but it also means “rebranding” so as to keep a claim on one’s historic identity even as the organizational link is severed.

The most visible splitting among Methodists is likely to happen at the local church level. Individual congregations will have to decide whether to stay, and if not, where to go. In some cases, that decision may divide the congregation itself, with one faction leaving to start something new. Jimmy Carter’s Maranatha Baptist is one of the more visible Baptist examples.

Some progressive congregations will choose to stay and force the fight. My old church, Oakhurst Baptist, in Atlanta, stayed, forcing each of its Baptist associations to officially vote it out (which they eventually did). Other congregations may simply exit quietly. There are about 800 United Methodist churches that have identified with the movement to accept LGBTQ members and clergy. They are the ones to watch, but others may join them. 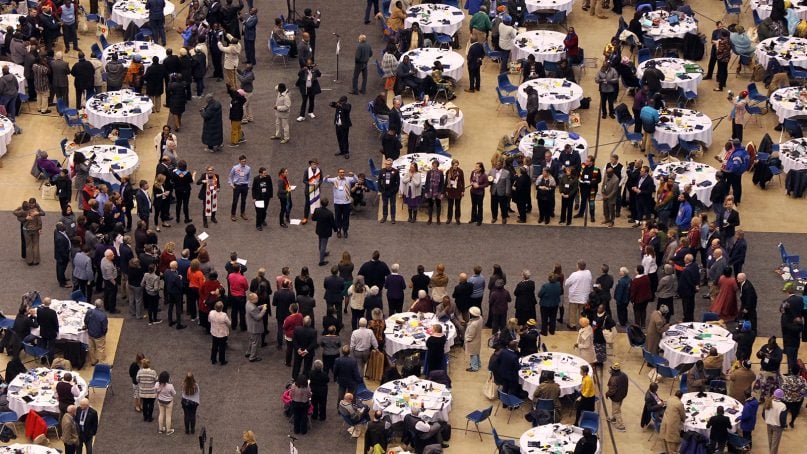 United Methodist delegates who advocated for LGBTQ inclusiveness gather to protest the adoption of the Traditional Plan on Feb. 26, 2019, during the special session of the UMC General Conference in St. Louis. RNS photo by Kit Doyle

When a church leaves, it can either join with others to form something new or join up with an existing denomination. Departing Southern Baptists formed the Cooperative Baptist Fellowship and the Alliance of Baptists, which are still going strong, but a few churches also aligned themselves with the American Baptist Churches, effectively mending the North-South rift that was created in the 1840s by slavery. The Reconciling Ministries Network may be the nucleus of a progressive Methodist alternative, but there are also overtures emerging from Episcopal and other denominations.

But what about individual Methodists? If they are like the Baptists in the 1980s, most haven’t been paying much attention to all the sound and fury. It is likely that they already attend a church that mostly matches their theological and political views, so most won’t notice much change, at least initially.

But there are sometimes crises that change that. When the issue of accepting LGBTQ persons becomes personal — a son or daughter, perhaps — individual Methodists may seek a new place to worship, and it may or may not be Methodist.

Perhaps more critically, young adults brought up Methodist are overwhelmingly on the progressive side of this issue. Their failure to pursue a clergy career — or even to stay in the church — is likely to further solidify a traditionalist future for the UMC.

The answer to how you split a denomination, then, is slowly, in hundreds of painful decisions. These will almost certainly result in multiple new, more polarized religious bodies with less diverse middle ground.

(Nancy T. Ammerman is professor of sociology of religion at Boston University. The views expressed in this commentary do not necessarily represent those of Religion News Service.)