Or at least that’s how Ronnie Malley remembers it being taught in school.

“Something that was embedded in my mind from schooling was that Western music was the pinnacle of all music,” said Malley, a Palestinian-American Muslim living in Chicago. “And that was difficult for me to digest. Because, well, music has been around for a very long time.”

But as the actor and music teacher studied the history of European music in his spare time, he became interested in the influence of Muslim rule in Spain on classical music. This led to his reading about the African predecessors of some modern Western instruments. Then, one day about five years ago, Malley stumbled across some research that traced the roots of American blues music back to West African Muslim slaves.

His discovery led Malley to imagine a musical play that explored the shared history of Islam, Africa, slavery and blues music through the eyes of Mamadou, a fictional 18th-century Muslim “griot,” or storyteller musician, who has been sold into slavery.

Malley’s journey through Western music has come full circle in the past three weeks, as a cast of students at Moraine Valley Community College have performed “American Griot,” by Malley and Chicago playwright Reginald Edmund, to sold-out audiences on the same suburban Chicago campus where Malley attended music classes two decades ago.

Malley has performed alongside real-life African griots in own his career as a musician and was eager to include their experiences in the play. In West Africa, griots are vital as custodians of tradition who teach the history of their communities through music and dance. As Mamadou, played by freshman Jarrin Comer, explains in the play, griots became “vessels of culture and time” in the Americas.

“I’ve been trying to find ways to express the omitted histories throughout the course of both American and Islamic history,” said Malley, who was also the play’s musical director. “I realized that just through the music alone, I was able to piece together a history of how music instruments, cultures and languages were exchanged over time.”

Indeed, at times the instruments’ paths serve up as much plot as the characters’. A scene at the end of the musical’s first act shows the banjo dueling with the West African ngoni, which scholars speculate evolved into the banjo. 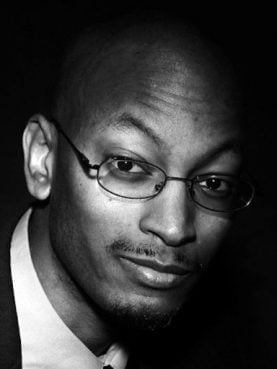 But the heart of the play are the musical and dance numbers featuring Arabic songs composed by Malley as well as songs in various West African languages that capture the cultural life of Africans in freedom.

“So oftentimes the narratives of African-Americans automatically start at slavery,” said Reginald Edmund, the resident playwright for a theater group called Chicago Dramatists, in a recent post-performance audience discussion at Moraine Valley. “We really don’t look at what came before. We came from a beautiful, powerful, amazing people. We wanted to go on that journey.”

Not lost in “American Griot” is the faith life of those Africans. The play serves to “build bridges between the African-American community and the Muslim American community, who are sometimes pitted against each other,” noted Malik Gillani, co-founder of Silk Road Rising, which developed and produced the play as part of its Mosaics: Muslim Voices in America program.

Silk Road Rising, formed in the wake of 9/11 to present plays by Asian and Middle Eastern writers in the Chicago area, has made a two-year commitment to focus exclusively on telling the stories of American Muslims for the remainder of President Trump’s term. For Christmas last year, the group produced a play about the Islamic story of Jesus’ birth. 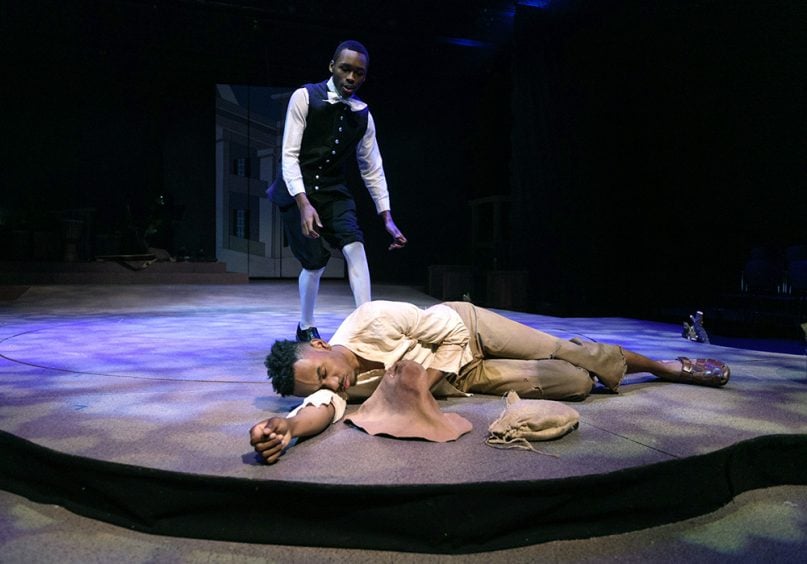 The play “American Griot” was performed Feb. 21-March 3 at the John and Angeline Oremus Theater in Palos Hills, southwest of Chicago. Photo by Glenn Carpenter

“Here we’re saying, we have the same spectrum of experience that we’re sharing,” Gillani said. “We have to find ourselves in the story of those slave ships … whether we’re new Americans or African-Americans who were brought here 400 years ago.”

Historians estimate that at least half of Africans enslaved in North America came from Islamic regions. Music served as a community builder and uplifting force among those slaves. Because drums were banned by slaveholders, the musical style of slaves from Africa’s Islamic belt, which tended to involve wind instruments rather than drumming, were easier to preserve in the U.S.

In her 1998 book “Servants of Allah,” historian Sylviane Diouf, whose work inspired Malley, introduced the now-popular idea that the style of the field holler, an early building block of the blues, evolved from West African Muslims’ melodic recitation of the Quran and, particularly, the vocal call to prayer. 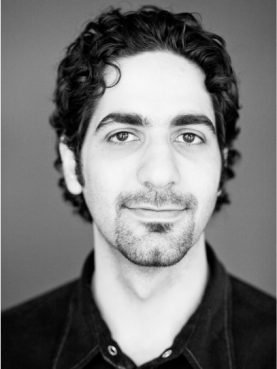 In her public lectures, Diouf plays early blues recordings alongside recordings of African muezzins. “You don’t know where one recording starts and the other begins,” she told Religion News Service. “People are shaking their heads at how clear the similarities are.”

Malley turned that comparison into the opening scene in the second half of “American Griot,” where the Arabic call to prayer was remixed with Negro spirituals in a stunning swell of sound.

Diouf also suggests that these techniques, from the melismas to the bending of notes, were not relics of a culture left behind, but proof that enslaved Muslims maintained their religious practices in the Americas.

“It’s not just memories of what these Muslim musicians did back in Africa,” she explained. “Muslims in the U.S. and elsewhere actually continued to recite the call to prayer, the Quran and Sufi chants. And when slaves who were not Muslim would hear this, for them it would be songs and they would incorporate it into their own traditions.”

According to Diouf, sophisticated, highly educated and well-traveled men wandering through West Africa as teachers, students, traders and griots were easy targets for kidnappers who sold them to European slave traders. But their rich history, strong education and culture before their forced arrival in the Americas is typically cleaved off in popular representations of slaves.

With “American Griot,” Malley and Edmund hoped to emphasize Mamadou’s life as a free man in Timbuktu as well as the African tradition of musical storytelling he represents.

“In a lot of movies it just seems like these abstract groups of people were just sort of rounded up,” noted Craig Rosen, who directed the play at Moraine Valley. “It was important to us to that (the enslaved Africans) are represented as real people who are incredibly educated, they know world languages and have culture and a civilization.”

The legacy of these African Muslims lives on, remixed with the influence of negro spirituals and field holler songs, in music around the world today.

“Though our bodies were broken, we found that our spirits lived on in music,” Mamadou declared in the play. “From the griot tradition, to the blues, to jazz, to something called rock ‘n’ roll eventually.”