(RNS) — After a gunman killed 11 worshippers at Pittsburgh’s Tree of Life Synagogue in October — the deadliest anti-Semitic attack in American history — Muslim communities around the country rushed to host vigils and show their support for the beleaguered congregation, raising more than $1.4 million dollars for survivors through their own organizations and crowdfunding campaigns.

In Pittsburgh, local Muslims promised to stand guard outside synagogues and walk alongside Jews who felt unsafe, as necessary, and attended mourning services with their neighbors.

Now, Jewish communities are reciprocating as Muslims reel from New Zealand’s deadliest shooting ever, which left 50 Muslim congregants dead at two mosques in Christchurch last week. Even as the U.S. remains mired in debates about allegations of anti-Semitism among Muslim leaders in Congress and in the Women’s March, Jewish leaders have raised funds, led vigils and shown their support for Muslim communities.

“Unfortunately we are all too familiar with the devastating effect a mass shooting has on a faith community,” said Meryl Ainsman, chair of the Jewish Federation of Greater Pittsburgh’s board, which has set up a relief fund to solicit donations for the New Zealand Attack Emergency Relief Fund. “We are filled with grief over this senseless act of hate.” 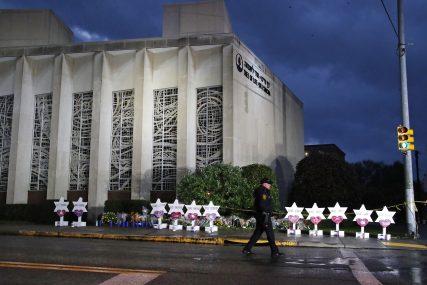 A Pittsburgh police officer patrols around the Tree of Life Synagogue and a memorial of flowers and Stars of David in Pittsburgh on Oct. 28, 2018. (AP Photo/Gene J. Puskar)

The Tree of Life congregation has launched a crowdfunding campaign to support the Christchurch victims, so far raising more than $11,000.

“(W)e feel compelled to come to the aid of those communities, just as our Jewish community was so compassionately supported only a few short months ago by people around the world of many faiths,” the fundraising page states. “We recall with love the immediate, overwhelming support Tree of Life received from our Muslim brothers and sisters in Pittsburgh.”

In an essay in the Washington Post over the weekend, (March 15), one member of the Tree of Life congregation recalled how her Muslim neighbors stood in solidarity with her community after the October shooting. “We promise we will continue to work with you in our common fight for the right of people of any faith to worship peacefully,” she wrote.

“The massacre in Christchurch pierces our hearts to the very core,” said Rabbi Jonah Dov Pesner, director of the Religious Action Center of Reform Judaism. “As we mourn this senseless loss of life, we hold our Muslim family in our hearts and commit to stand with them during this painful time — including by visibly and vocally showing up in solidarity.”

Last week, members of the Religious Action Center joined other interfaith groups at the Church of the Epiphany in downtown Washington, D.C., to show support for a local Muslim community during Friday prayers. Rabbis and Jewish interfaith leaders spoke at vigils and Friday prayer services around the country, from Los Angeles to Cleveland to Boston.

“All of us are here just to be alongside you, because you’ve stood alongside us,” Jewish Community Relations Council Executive Director Jeremy Burton said at the Islamic Society of Boston Cultural Center’s Friday prayer service last week, where the city’s mayor and police commissioner also spoke. “Because we stood together as communities time and again. … When we have mourned and suffered, we’ve known that we have not mourned and suffered alone, and we want you to know that you do not suffer alone.” 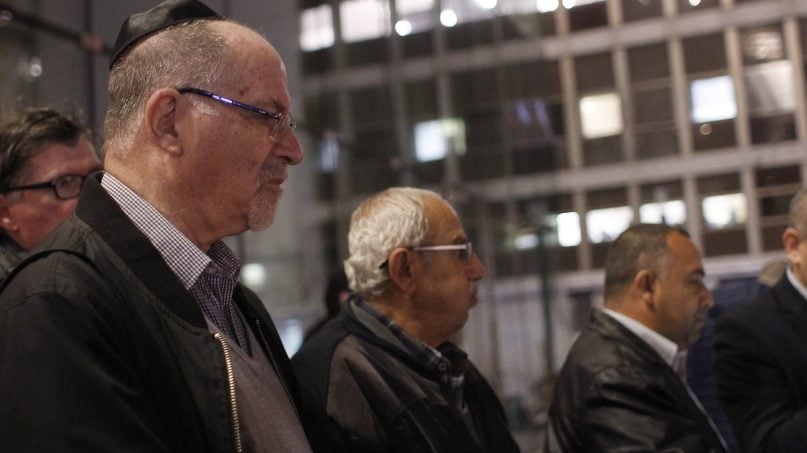 People participate in an interfaith vigil outside the New Zealand embassy in Tel Aviv, Israel, on March 17, 2019. Photo courtesy of Natacha Larnaud

In New Zealand, Jewish leaders also closed their synagogues on Shabbat for the first time ever, both as an act of solidarity and to address ongoing security concerns.

“We offer our full assistance and support to the Muslim community and stand united with it against the scourge of terrorism and racism, which we must do all we can to banish from New Zealand,” Stephen Goodman, the president of the New Zealand Jewish Council, told the Jewish Telegraphic Agency.

In Israel, the Jewish organization Tag Meir joined with local Muslim leaders and Israeli-Arab college students to host a somber candlelight vigil outside the New Zealand embassy in Tel Aviv Sunday night. During a televised speech, Rabbi Esteban Gottfried, director of the Beit Tefilah Israeli community in Tel Aviv, encouraged the crowd to sing an altered version of the popular song, “Oseh Shalom,” (“A Prayer for Peace”), adding Ishmael, a reference to the biblical patriarch in Muslim tradition and first son of Abraham. 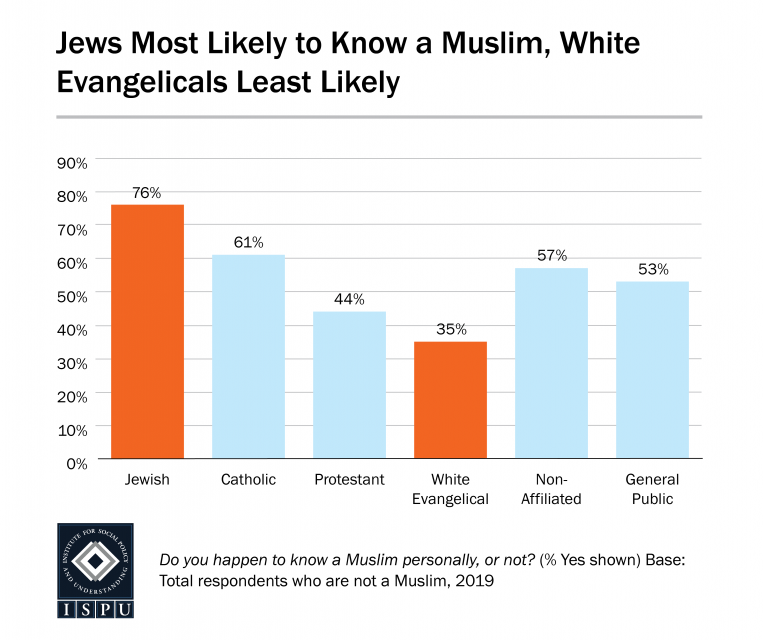 Rabbi Sharon Brous, founding rabbi of the IKAR synagogue in Los Angeles, said that the New Zealand shooting’s victims were not limited to those in the Christchurch mosques.

“I know this because in November, after the shooting at Tree of Life, the whole Jewish community felt the reverberations immediately and fiercely, across the country and across the world,” she said. “We trembled, wept and worried. Our family had been attacked. My heart hurts for my Muslim brothers and sisters. … I reach out to you with love and in solidarity.”

While media and political furor over recent comments by Rep. Ilhan Omar criticizing the influence of the pro-Israeli lobby seemed to highlight stark, insurmountable divisions between Jewish and Muslim communities, new data from the Institute for Social Policy and Understanding’s 2019 American Muslim Poll suggests a friendlier relationship.

The data shows that U.S. Jews and Muslims hold similarly favorable opinions of each other, with just 10 percent of Muslims and 13 percent of Jews reporting that they hold an unfavorable opinion of the other group. And while about half of the general public told the ISPU they personally know an American Muslim, more than 75 percent of Jews do — a proportion substantially more than any other faith group surveyed.

Even among Rep. Omar’s constituents in Minnesota, some locals Muslims and Jews say they are united in condemning her statements. Jewish leaders told CNN they had been approached by Muslims asking how to support their Jewish neighbors. And a group of more than 2,100 Jews signed on to an open letter in support of Omar, arguing that “genuine anti-Semitism and the growth of white supremacy” should instead be the focus of media attention.

The attacks in Pittsburgh and Christchurch shared the same root cause, Jewish leaders noted, as do anti-Muslim and anti-Semitic discrimination more broadly.

“An attack on any House of Worship, whether a church in France or the U.S., synagogues in Jerusalem, or Pittsburg or yesterday’s horrific mass murder at two mosques in Christchurch is an assault on human dignity and our right as people of faith to pray to G-d,” Rabbis Marvin Hier and Abraham Cooper, leaders of the Simon Wiesenthal Center, said in a statement. 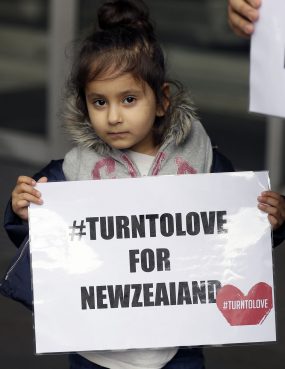 A young demonstrator holds a banner from multi-faith group ‘Turn to Love’ during a vigil at New Zealand House in London, on March 15, 2019.(AP Photo/Kirsty Wigglesworth)

“In many ways, his hatred was inspired and validated by the same violent online narrative that motivated the Pittsburgh Synagogue mass murderer, Richard Bowers, who was involved with online platforms of the extreme alt-right, including Voat and Gab,” the two rabbis said.

The Anti-Defamation League, formed in the early 1900s as a response to growing anti-Semitism, said the shooting reinforces its findings that violent white supremacy is a global danger.

“(M)odern white supremacy is an international threat that knows no borders, being exported and globalized like never before,” said Jonathan Greenblatt, CEO of the ADL. “The hatred that led to violence in Pittsburgh and Charlottesville is finding new adherents around the world. … this attack was not just focused on New Zealand; it was intended to have a global impact.” 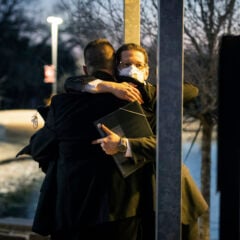 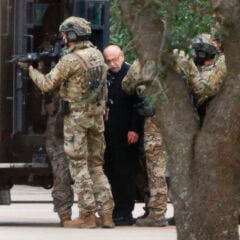