NAIROBI, Kenya (RNS) — When Cyclone Idai struck the Southeast Africa coast last week, it swept away everything in its path, including churches, schools and homes in the Mozambican port city of Beira and beyond.

By Sunday, the number of confirmed deaths caused by the storm in Mozambique, Malawi and Zimbabwe, already surpassing 700, continued to rise as churches, Christian relief organizations and agencies raced to aid the three countries most affected by the tropical storm.

After causing extensive flooding as a tropical storm, the cyclone — traveling at a speed of up to 177 kilometers (106 miles) an hour — made landfall on the Mozambican coast on March 14 and continued inland. On Saturday, agencies reported that the number of deaths had reached nearly 750 and was expected to rise in the three countries.

Last week, Mozambican President Filipe Nyusi said the number of deaths in his country could reach 1,000. Initial government estimates said nearly 1.8 million people were affected by the floods — including 900,000 children, according to UNICEF.

In Zimbabwe, the storm devastated Chimanimani and Chipinge districts in the eastern province of Manicaland, near the border with Mozambique.

“The situation is bad. Roads have been damaged in the landslides caused by the heavy rains. This has made the mountainous region inaccessible,” Khumbulani Ndlovu, director of integrated programs in Zimbabwe for the evangelical Christian aid organization World Vision, told Religion News Service in a telephone interview. “An irrigation scheme has also been destroyed.” 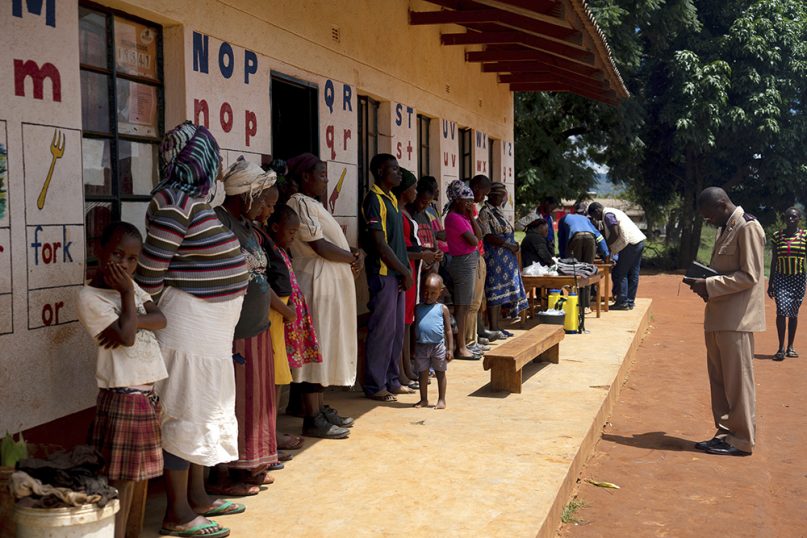 The Salvation Army holds a prayer service for members displaced in Chimanimani, Zimbabwe, on March 24 2019. Cyclone Idai’s death toll has risen above 750 in the three southern African countries hit 10 days ago by the storm. (AP Photo/KB Mpofu)

More people are still trapped by the floods in remote rural areas.

“Our priority for staff in the disaster zone is rescuing people, accommodation, registering the affected groups, but they do not have resources to respond to food, water and shelter needs,” Antonio Anosso, the Catholic organization Caritas’ humanitarian officer for Mozambique, said in a statement. (He could not be reached by phone due to communication challenges.)

The International Federation of the Red Cross has cited increased concerns over disease outbreak while citing new cases of cholera and malaria in Beira, Mozambique.

In Malawi, church aid agency officials say survivors are being housed in churches, mosques and schools after the storm left hundreds of thousands homeless in the Lowershire Valley and Southern districts. According to Rev. Felix Chingota, chairperson of the Public Affairs Committee, a multifaith group of religious organizations, many people have lost property, and farm crops have been destroyed.

“In the immediate, the people camping in schools and churches need relief food, water, blankets and clothing,” said Chingota.

Some faith-based organizations that normally mobilize in times of natural disasters are themselves still trying to recover. Mudslides swept away a Salvation Army outpost in the Zimbabwean town of Chimanimani, where bridges and houses were also destroyed.

“We have experienced and seen floods over the past years, but never before anything so destructive as the scale of what is being experienced now. Both life and property are being lost almost on a daily basis,” Malawian Evangelical Lutheran Church Bishop Joseph Bvumbwe told Lutheran World Information. “We desperately need your urgent support and prayers.”