CHICAGO (RNS) — On Friday afternoons, the tech startup staffers and other daily occupants of a downtown co-working space here are learning to coexist with a new neighbor down the hall: A small conference room on the third floor has been transformed into a Muslim prayer room.

It’s not the most conventional setting for a mosque, but then little about Masjid al-Rabia is typical.

Here, congregational prayer is typically led by a woman, as is the call to prayer. In fact, there’s no gender segregation of any sort: Men and women pray alongside each other.

There’s also no minbar, or pulpit, for the Friday sermon. And sermon itself, known as a khutba, is a discussion circle. “We believe in entrusting one another with leadership through a community-led khutba, rather than having one person preaching about what’s right and what’s wrong,” explained 31-year-old Mahdia Lynn, Masjid al-Rabia’s co-founder and executive director, before the small group of congregants flipped open a Quran and began asking questions.

Masjid al-Rabia, opened in December 2016 as a women-centered mosque, is part of a growing global movement toward ensuring mosques are accessible and friendly toward women worshippers.

In Los Angeles, M. Hasna Maznavi founded the nation’s first women-led Muslim house of worship, the Women’s Mosque of America, four years ago. Mosques in Berkeley, Calif.; Paris; Berlin; Copenhagen, Denmark; and other cities have drawn headlines for their focus on women. Turkish mosques launched a campaign in the past decade to ensure that all mosques in Istanbul have equal facilities for women.

Masjid al-Rabia, named after the eighth-century Sufi saint Rabia Basri, who is recognized as one of the most influential women in Islamic history, sets itself apart from most other women-focused mosques. And that’s not just because media and other Muslims have branded it an “LGBT mosque.”

It’s also a place where no Muslim woman is excluded, said Lynn. She said that women have the right to exist and socialize “outside the male gaze.”

“But one of the most important things about those spaces is to create that space where it is safe and affirming for all women,” she said.

That means including women from all walks of life. New converts who are still learning how to pray and navigate basic Islamic rituals. Women who follow different political ideologies and Islamic denominations. Women who are disabled or mentally ill or economically disadvantaged. Women of any racial or ethnic background. Women who have lower literacy or who are incarcerated. Women who are LGBT or otherwise find themselves on the margins of Muslim communities. Lynn, a white convert who is Shiite, is careful not to label the mosque as an LGBT mosque, or even a women’s mosque.

“Patriarchal violence is not limited only to women, because gender is not so clean-cut as that,” said Lynn, who herself is transgender and has worked as a community organizer focused on transgender inclusion for 12 years now. “And so we make it clear that this is not a women’s mosque. It is women-centered.”

Masjid al-Rabia grew out of a coalition of Chicago-area groups geared toward LGBT Muslims, including Third Coast Queer Muslims and other informal networks hosting congregational prayers and meals out of members’ homes.

In early 2016, many of these local leaders decided to open up a prayer space that was “issues-based rather than identity-based,” Lynn explained.

It would be a prayer space focused on building their vision of an accessible Muslim community, with help from allies, rather than simply on gathering people who felt marginalized in certain ways. Indeed, one of her co-founders, Cruz June Rodriguez, is male, as are several members of the team.

“We operate on a theory of radical accessibility, which means to eliminate any and all barriers that prevent the full agency and the freedom of movement for all people,” Lynn said. “For a spiritual space, if you claim to be inclusive and you, whether intentionally or passively, are denying people access to that room, that is a moral and ethical failure. It’s not just an organizational one.”

The volunteer team is working to build programming that is as accessible as possible. Every event the mosque hosts is free, offers food and drink and is accessible via public transit. Organizers post audio recordings and transcripts online, and they are currently adapting existing programming to make it more accessible for Muslims with intellectual and developmental disabilities.

And perhaps no one is left more on the outskirts of mainstream Islamic communities than incarcerated LGBT Muslims. Care packages to be sent to detained Muslims. RNS photo by Aysha Khan “There is no spiritual support for trans people in prison in the U.S.,” Lynn said. “It just doesn’t exist. So it only made sense that we would work towards providing that support for Muslims who are not receiving spiritual care.”

Their prison outreach began with a project they called the Black and Pink Crescent, an outgrowth of the national Black and Pink prison abolitionist organization. That group organizes a pen-pal program and prisoner-written newspaper to uplift LGBT and HIV-positive prisoners.

The prison outreach has now become a cornerstone of Masjid al-Rabia’s work. Led by prison outreach coordinator Malik Johnson, who joined Masjid al-Rabia last year, a team of volunteers sends out a newsletter to over 500 detainees in jails, prisons, detention centers and institutions across the country. The volunteers also make care packages with prayer rugs, prayer caps, Qurans and other spiritual literature to meet the needs of inmates.

Johnson said prisoners often write back after receiving a care package to express their appreciation.

“I got this letter from an inmate that outlines what they go through when they don’t have a rug to pray on, when they’re left kneeling on concrete and developing all sorts of health issues,” Johnson said. “They’re just so excited to know that there’s an organization that feels they’re not wrong in the ways they express themselves.”

The mosque has partnered with Believers Bail Out, a new Chicago-based coalition raising funds to bail out Muslim pretrial detainees, and offers spiritual support for Muslims who are bailed out. The mosque also hosts letter-writing events every month and is helping coordinate marriages between several Muslim detainees across the country.

When Masjid al-Rabia first launched, in the basement of a Unitarian Universalist church, the leaders hid the location of their mosque to protect congregants. It wasn’t until last year that they took the “audacious” move of opening up their own location, Lynn said.

The mosque has drawn some animosity from non-Muslims as well as Muslims – who largely believe homosexuality to be a sin – and Lynn’s team takes careful security measures. But she said that on an individual level, local Muslims have mostly proved willing to “affirm the full spiritual citizenship of marginalized people in our communities.”

“Part of our role now is to model possibilities,” Lynn said. “We show that it’s possible that not only can an organization like this exist, but we can thrive and we can dream big.”

Opening an independent location and publicizing the address and hours online was a way to show other organizations that moving toward inclusion does not have to be done from inside the closet.

In Chicago, mosque organizers said, that has shown to be the case. Some local Muslim leaders were skeptical at first but have since been willing to collaborate with Masjid al-Rabia on faith-based initiatives.

“Now we have a huge amount of work to point to, to show that this isn’t radical or not grounded in reality or, or any of the scary things that they accused us of being at the beginning,” Lynn said. “It is about the faith. It is about justice. We’re not just a fringe outlier in the city.”

And their openness has meant that some Muslims feel like they’re no longer on the fringes, either.

When they first opened, the co-founders used to receive messages almost daily from people sharing the same thoughts: I thought I was the only one. I thought I was alone.

Now, years later, such messages are rare. And that’s the real blessing of their work, Lynn said. 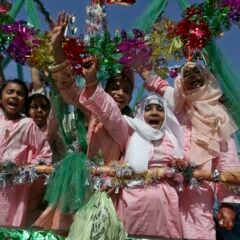 Opinion
I wear hijab. I also respect any woman who chooses not to.
Follow us on Facebook!
Submit your photos to RNS