OMAHA, Neb. (RNS) — Tara Hollis couldn’t see any floodwaters when she first peered out the window at 5 a.m. on the morning of March 14.

Cars still were driving by on the road, Hollis said.

Half an hour later, water from the Loup River, which runs along the south side of the city into the Platte River, had crept up to the house she shared with her son, her boyfriend and her brother in Columbus, Neb., a city of about 22,000 people west of Omaha. 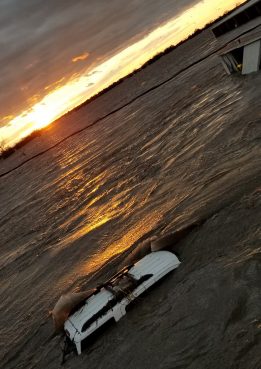 Waves of floodwaters crash over a submerged car, as seen from a house that was surrounded by floodwaters earlier this month, as the sun sets in Columbus, Neb. Photo courtesy of Tylor Hollis

By 9:30 a.m., the 27-year-old and her family were trapped on the second floor of the rental house as the water reached up to four feet on the first floor and the power went out, she said.

They would wait another 24 hours to be rescued, hanging colorful towels and an S.O.S. sign outside to make themselves easier to spot.

They watched the orange sunset streak across the sky as the fields surrounding the house became an ocean, and their cars disappeared beneath the waves. Trees and huge chunks of ice flowed past, crashing into windows. They feared a support beam might give way and bring down the house.

The next morning, they were rescued from the second-floor balcony of the house by a National Guard helicopter.

Despite their ordeal, Hollis said she is thankful.

“I’m so grateful our house is where it’s located at,” she said, standing on the front lawn two weeks later.

“I’m looking at all these houses, and their roads to the house are just missing, so they walk or they can’t get there.” 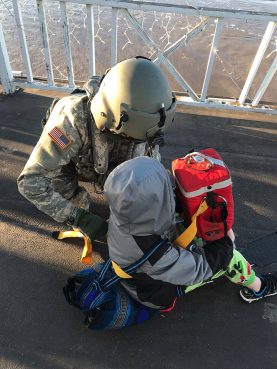 Tara Hollis’ 7-year-old son Ayden is rescued by the National Guard via helicopter from the second story of their home in Columbus, Neb., during flooding earlier this month. Photo courtesy of Tara Hollis

In Nebraska, many residents like Hollis are getting a first look at their homes since floodwaters raged across the Midwest weeks ago.

And local churches and national faith-based disaster relief groups — along with state and federal officials — are stepping in to lend a hand with the recovery.

But it’s still early in that recovery process, said Hollie Tapley, disaster response coordinator for the United Methodist Church’s Great Plains Conference, which includes Nebraska and Kansas. And both flood victims and their neighbors wanting to help still are figuring out what needs to be done.

The historic flooding began earlier this month — the result of melting snow, heavy rain and a “bomb cyclone” along the Missouri River and its tributaries.

It has forced thousands of people from their homes; washed out roads and bridges; destroyed property, crops and cattle; and been blamed for at least three deaths, according to Associated Press reports.

In Nebraska alone, 81 of 93 counties have declared an emergency, as well as 99 cities and five tribal areas, according to the state.

And the state has estimated more than $1 billion in damage — $400 million in agriculture alone, according to Deb Hoffman, a pastor focusing on counseling and pastoral needs at Omaha-based Lifegate Church. 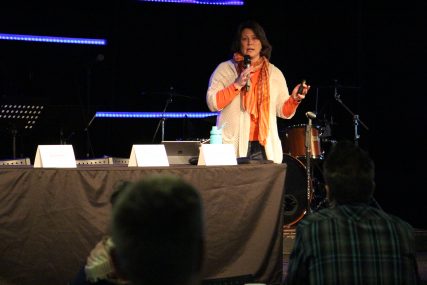 The pastor spoke at a forum hosted Wednesday (March 27) by Within Reach, a network of Omaha-area church leaders, at Christ Community Church in Omaha. The forum gathered area church leaders and representatives of several nationwide ministries in the area to discuss how they can work together after the disaster.

“A lot of people are overwhelmed hearing that, but we just want to encourage you that when these organizations leave — because at some point they will; they’re national organizations — the church is who’s left, and we’re some of the best resources for people that are hurting, that have lost everything, that are looking for hope,” she said.

Wilbur Rayl said he didn’t believe it when two sheriffs came to the door of his cheery, blue-sided ranch home in Fremont, Neb., to tell him to evacuate the night of March 13.

Rayl’s home is part of Emerson Estate, a ring of houses surrounding a small, private lake, not far from the Platte River. He and his wife have lived in the house for almost 50 years, raising three boys and “a lot of dogs” within its wood-paneled walls, he said. 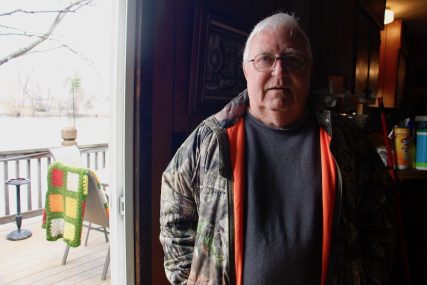 Wilbur Rayl stands inside his home on March 28, 2019, in Fremont, Neb., which was damaged when floodwaters raged across the Midwest earlier in the month. RNS photo by Emily McFarlan Miller

“I said, ‘No, we’re not leaving. We’ve been flooded before. It never came in here,” he said.

The next day, three inches of water stood inside the house, Rayl said — and they were lucky.

On Thursday morning, Emerson Estate was buzzing with activity, with vehicles advertising a number of different ministries and disaster response agencies parked in front of houses with red, yellow and green cards in plastic sleeves on their doors noting which ones were safe to enter.

More than a dozen volunteers with evangelical disaster relief organization Samaritan’s Purse filled the Rayls’ house. Samaritan’s Purse is one of three ministries that participated in the Within Reach Disaster Response Forum the day before, setting up its mobile response unit in the parking lot of the Fremont Alliance Church, which Rayl’s daughter-in-law attends, and bringing in about 55 volunteers from across the country.

Those volunteers pulled up flooring, cut out drywall and cleaned up debris in the yard. When FEMA stopped by and told Rayl the insulation beneath the house would have to come out, volunteers donned white protective suits and inched into the crawlspace on their bellies without hesitation. At 75 years old, the homeowner said, he wouldn’t have been able to do that work himself.

And he was grateful for the prayers that chaplains from the Billy Graham Rapid Response Team had offered, he said. He grew up Baptist and worked as an electrician for Catholic and Lutheran institutions, he said, and while he doesn’t regularly attend a church now, he still believes in the power of prayer. “If you believe in God, if your heart’s in the right spot, I think you’re OK,” Rayl said.

One of the Samaritan’s Purse volunteers mucking out his house was Tyra Esterly, who traveled to Nebraska with her mom and sister from Shelton, Wash.

Her family, which owns its own custom wood sign business, has spent 17 or 18 weeks volunteering with the organization since last August. That’s when her mom and sister joined a team responding to the Carr Fire near Redding, Calif., Esterly said. They loved how the organization ministered to homeowners both spiritually and physically.

“When we go out, we just think, ‘These are our neighbors, even though they’re far away,” she said. “Jesus says to love your neighbor as yourself, so we want to love on these people who are hurting and share Jesus with them.”

Other local and national ministries have arrived in recent days in areas devastated by the flooding, including Convoy of Hope, the Episcopal Diocese of Nebraska, International Orthodox Christian Charities, Lutheran Family Service of Nebraska, Presbyterian Disaster Assistance, the Society of St. Vincent de Paul Omaha and Southern Baptist Disaster Relief.

The Islamic Center of Omaha, the Jewish Federation of Omaha, the Yezidi community in Lincoln and the Ponca Tribe of Nebraska also have taken up collections to help their communities and neighbors, many pointing to their beliefs in doing so. 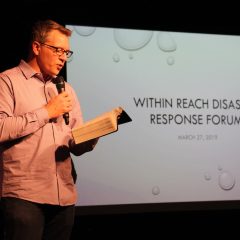 Mark Ashton, lead pastor of Christ Community Church and founder of Within Reach, speaks March 27, 2019, at the Within Reach Disaster Response Forum at his church in Omaha. RNS photo by Emily McFarlan Miller Many of the volunteers and leaders from the Omaha-area churches that were represented at the forum knew somebody who was impacted by the flooding, said Mark Ashton, pastor of Christ Community Church in Omaha and founder of Within Reach. Some may have been impacted themselves.

His church has been collecting money, water and cleaning supplies, he said. It also plans to partner with an organization called Eight Days of Hope, bringing 200 volunteers next week to work in Waterloo, Neb., for 14 days.

“When tragedy strikes, I think that’s where the church has the opportunity to be at its best,” Ashton said.

On Thursday (March 28), Tapley crossed the bridge over the Loup River in Columbus in her truck, which bears the logo of the Great Plains United Methodists in Disaster Response.

Columbus is an area that hasn’t received a lot of national attention, the disaster response coordinator said.

“We’re truly living our faith, being that quiet disciple and going in and doing what we can to restore a little bit of hope in these individuals’ lives,” she said. Businesses along the road were flattened, though a sense of humor remained: A handwritten sign hung from a fence advertising mud wrestling. Roads were washed away, leaving some farms difficult to access. Tapley wondered if she might be able to reach them by ATV.

She stopped and asked a man sitting in the garage of one home if she and her team could do anything to help. That’s mostly what they’ll be doing for the next week as they fill work orders passed along to them by United Way, then introduce themselves to neighbors who may not know those resources are available to them, she said.

Tapley also checked in on Hollis, whom she’d met the day before.

Hollis had returned to her home, two weeks to the day it had been surrounded by water, with family and friends to recover what they could of their belongings. A team of eight volunteers with the Great Plains United Methodist disaster response team came to help. 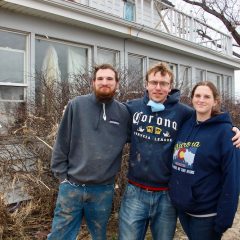 Tylor Hollis (from left to right), Shawn Vanderpool and Tara Hollis stand March 28, 2019, outside their home in Columbus, Neb., which was damaged when floodwaters raged across the Midwest earlier in the month. RNS photo by Emily McFarlan Miller 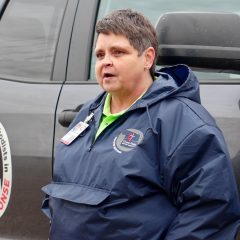 Inside, her 7-year-old son Ayden’s beloved orange stuffed monkey was gone. His first Bible was a little soggy but still salvageable, she thought.

She watched as everybody else broke down in tears. She still hadn’t cried yet, she said — maybe because there is just so much going on at the moment.

But in the midst of it all, she not only has received help from the United Methodist team but also from her church, Trinity Lutheran; other churches in the area; her friends and family; her son’s school; even the Dairy Queen where she works, which is giving free meals to flood victims and responders.

That’s one way her faith has helped her through this ordeal — by creating a community that has rallied around her, Hollis said.

“It’s kind of hard to deal with it on your own,” she said.

“It’s really great having the church. It’s like a second home.” 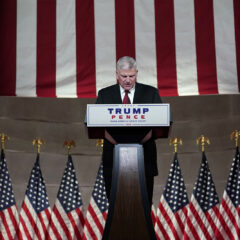 News
His RNC prayer was neutral, but Franklin Graham says the choice for president is not News
In Iowa, hard-hit churches and faith-based organizations rally to help out in wake of derecho storm News
‘We’ve got to move on’: Q&A with Franklin Graham