(RNS) — When 23-year-old Rabia Khan was a student at Princeton University, she felt safe within the confines of its ivy-covered walls. That changed when she graduated. “I am hyperaware of whether someone will attack me or say racist things to me because I am hijabi,” Khan said.

She is right to be concerned. A 2017 survey found that more than half of Muslim women living in the U.S. say they had experienced at least one incident of anti-Muslim discrimination in the last year.

Women like Khan are watching closely as Rashida Tlaib and Ilhan Omar, the first female Muslims elected to Congress, take on leadership roles. The two are sending a message that the challenges Khan anticipates are not insurmountable.

“Muslim women who are outspoken aren’t being loud,” Khan said. “They amplify their voices to be heard in a crowd that often doesn’t want to listen.”

RELATED: In Chicago, one mosque charts its own path

Khan is one of six high school- and college-age Muslim women we interviewed over the last year, all of whom head their Muslim Students Associations or campus clubs or are impassioned organizers, and who see role models in the high-profile activists — Linda Sarsour, Ingrid Mattson and Amina Wadud — who have recently been redefining what it means to be a feminist leader.

Since Tlaib and Omar arrived in Washington, they have faced sexist, racist and anti-Muslim attacks from both right-wing trolls and colleagues in Congress, who have objected to everything from their positions on Palestine to how they dress. Similarly intense assaults have greeted Sarsour since she came to attention as a leader of the Women’s March in 2017. Her own criticism of Israel and her statements about the Nation of Islam have brought accusations of anti-Semitism.

Our interview subjects weren’t fazed by the abuse their role models have weathered. Iman Syed, an 18-year-old high school student from Rye, N.Y., founded her school’s civics club and hopes to run for office herself someday. For Syed, Tlaib and Omar’s election proves that anything is possible. 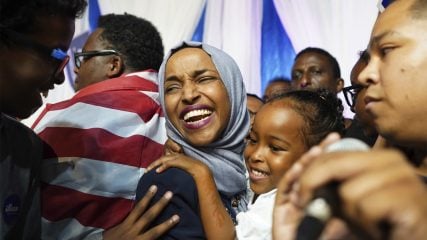 Marwa Moaz, a 25-year-old from Alexandria, Va., cited the Palestinian thobe Tlaib wore for her swearing-in, as well as Omar’s open critique of Israel, as evidence that young women like herself “should have no fear to be who we are unapologetically, and to stand up for what we believe in, even if it is not the popular opinion.”

For Shewa Shwani, a 22-year-old student at Syracuse University and president of her campus’s chapter of the Food Recovery Network, collective action by Muslim women and mutual support can overcome the barriers they face. With their shared experiences of systemic discrimination, Shwani believes, Muslim women can be more effective leaders and partners with all minority groups.

Already, said Mattson, a professor of Islamic studies at the University of Western Ontario, Muslim women are reasserting Islam’s understanding of women’s roles. Women once had much greater access to leadership positions in pre-modern Islamic society. While a male imam usually led prayer, according to Mattson, “there are scholars, all sorts of religious institutions and diffused religious authority, even midwives would have both a medical and a pastoral role.”

As much of the Muslim world was colonized, however, all of its institutions, including religious ones, were reconfigured after the Western model of hierarchical bureaucracy, dominated by men.

This was compounded, Mattson explained, by the “Americanization of Islam.” As the numbers of Muslims grew in the U.S. through an African-American revival and immigration, imams felt pressure to conform to the Christian model of clergy — formally trained specialists connected to a place of worship. And as “the imam became like a clergy person — like a minister in a church or a rabbi in a synagogue — and had all the power and all the authority,” Islam became confined to the mosque.

The bias became so pervasive that it is frequently found among older Muslim Americans, for whom a patriarchal model of leadership appears natural.

Mattson herself represents the coming change. A busy speaker and writer, she is the first female president of the Islamic Society of North America, one of several Muslim groups that have taken the lead as the voice of Islam in the U.S. “We’re shedding that narrow congregational model and also rediscovering our history,” she said.

Within Mattson’s work and research are “the intellectual tools,” Syed finds, to speak fearlessly against injustice in all its forms, even when her own views don’t align with those of other Islamic community members. 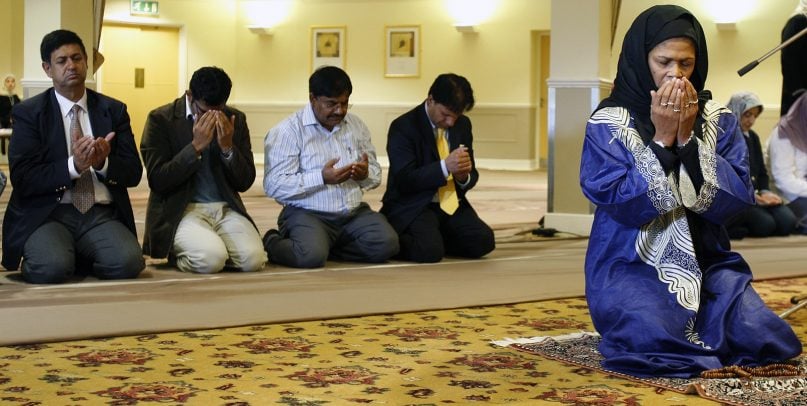 A number of young Muslim women we spoke with also named Wadud, a former professor at Virginia Commonwealth University and feminist scholar of the Quran, as an inspiration. “(She is a) hero who has empowered us to reclaim our leadership and reclaim the interpretation of our religious texts, reminding us that the majority of religious scholars in Islam have historically been women,” said Rana Abdelhamid, the 25-year-old founder of (IM)WISE, an organization committed to teaching self-defense to Muslim women.

Wadud has been affectionately called the “Lady Imam” since she led a Friday sermon in 1994 at a mosque in Cape Town, South Africa — a role usually reserved for men. Wadud rejects the label “leader,” which she thinks implies a hierarchical structure. Instead, Wadud wants “a whole new systematic relationship in regards to how we get things done,” which she describes as “taking ownership of the mothership of Islam.”

This means, she said, partnering with groups outside Islam. While Muslim women are not all “on the exact same page,” Wadud said, “it’s a very vibrant period.”

The young women we interviewed agreed that the new brand of leadership demands a broader exchange. “It is incumbent for Muslims to interact with all people within the community,” said Syed, “irrespective of religious faith, and to fully immerse themselves in the American experience.” Rashida Tlaib. Photo by Marisol Dorantes for Muslims for American Progress, a project by ISPU

Shwani pointed out that while her parents “trusted their imam or other religious leaders with anything,” Muslim high school and college students are not afraid to challenge their leaders and pose questions that their grandparents “would’ve been too afraid or embarrassed to ask.”

Many younger American Muslims consider social justice advocates to be important religious leaders, according to Kahn, and when asked what makes a good Muslim leader, Shwani described someone who is “up to speed on events, trends,” and as “comfortable to address certain sensitive topics in our community.”

What came through clearly is that while they are guided by the values of Islam — equality, adaptability and the suppression of hateful, extremist voices — young Muslim women don’t want to solely be defined by their faith.

Syed was a featured speaker at last year’s March for Our Lives event in White Plains, N.Y., attended by more than 5,000 people. But she told us, “I don’t see myself as a Muslim leader.” Rather, she sees herself as someone who practices Islam in her private life and uses the teachings of her faith to be a more effective advocate for equality and social justice.

Nonetheless, Shwani feels that her leadership roles have come with the added responsibility of representing her religious community. “I have done a lot to help the food waste and hunger crisis on our campus and community and I hope it proves to people what … Muslim women are capable of,” she said.

As they navigate the cultural challenges of being Muslim and female in America, these young women have recognized that their struggles can also inform change. “Any woman in any leadership role today will better the position simply because they are a woman,” Moaz said. “Simply because our stories and our narratives have never been heard before. Simply because women in power shatters concepts of patriarchy.” 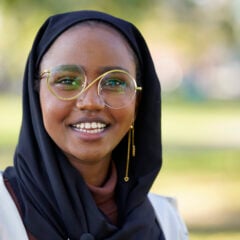