A small viral tempest blew up this past week after a Pennsylvania state representative opened the legislative session with a prayer that was, shall we say, far from the usual exercise in spiritual inclusion. First-term Rep. Stephanie Borowicz (R- Centre/Clinton) invoked Jesus’ name 13 times in a way that seemed designed to send a message to Movita Johnson-Harrell, who after a special election in Philadelphia was about to be sworn in as the first Muslim woman to serve in the Pennsylvania legislature.

Johnson-Harrell said Borowicz’s prayer “blatantly represented the Islamophobia that exists among some leaders”—a sentiment that was widely shared by fellow Democrats and liberal commenters.

For her part, Borowicz issued a statement declaring, “If a lawmaker who is a Christian can no longer stand in a general assembly in America — when there are Bible verses inscribed all throughout our beautiful state Capitol — and pray to Jesus without ridicule, then we are no longer free.” Conservative commenters tended to take her side, pointing out that a Muslim prayer was recited as part of Johnson-Harrell’s swearing-in.

Here are a few interlinear comments on Borowicz’s prayer, which I’ve transcribed in italics.

Not a good beginning. A call to corporate prayer is inappropriate in such a setting, and triply so given what was to come next.

Jesus, I thank you for this privilege, Lord, of letting me pray, God, that I, Jesus, am your ambassador here today, standing here representing you, the king of kings, the lord of lords, the great I Am, the one who’s coming back again, the one who came, died, and rose again on the third day.

This is not just praying to Jesus. It is witnessing.

And I’m so privileged to stand here today, so thank you for this honor, Jesus, God, for those that came before us—Washington at Valley Forge, and Abraham Lincoln, who sought after you in Gettysburg, Jesus, and the founding fathers in Independence Hall, Jesus, that sought after you and fasted and prayed, for this nation to be founded on your principles and your words and your truth.

The founding fathers did not fast and pray during the Constitutional Convention. At a difficult junction in their deliberations, Benjamin Franklin did propose a prayer, but his proposal was ignored. In point of fact, the Constitution makes no mention of God, much less Jesus.

God, forgive us. Jesus, we’ve lost sight of you. We’ve forgotten you, God, and our country. And we’re asking you to forgive us, Jesus, that your promise and your words say that if my people who were called by my name humble themselves and pray and seek your face and turn from their wicked ways, that you’ll heal our land. Jesus, you are our only hope.

To say that “we” are asking Jesus for forgiveness is beyond presumptuous.

Lord, thank you that he stands beside Israel unequivocally, Lord. Thank you that, Jesus, that we’re blessed because we stand by Israel and we ask for the peace of Jerusalem, as your word says, God.

Special pleading for Israel, in a governmental arena not concerned with foreign policy, can only be interpreted as a poke at the Muslim woman about to be sworn in.

We ask that we not be overcome by evil, and that we overcome evil with good in this land once again. I claim all these things in the powerful, mighty name of Jesus—the one who, at the name of Jesus, every knee will bow and every tongue will confess, Jesus, that you are Lord. In Jesus’ name, Amen.

A quote from Isaiah, by way of Paul. For Christians, it’s an assertion that Jesus is the dispenser of the final judgment. For Jews and everyone else, not so much.

OK. Like it or not, American politicians have, since the beginning of the republic, invoked the Deity when engaged in civil religious discourse. But since the founding fathers, they have habitually steered clear of Jesus’ name.

The Declaration of Independence does not mention Jesus, but “nature’s God,” “Creator,” and “the Supreme Judge of the world.”  Abraham Lincoln put “under God,” not “under Jesus,” in the Gettysburg Address. Periodic attempts in Congress to amend the Constitution to recognize the law and authority of Jesus Christ (most recently in the early 1950s) have always gone nowhere.

To be sure, when it comes to ceremonial occasions, a somewhat more sectarian approach has been taken in recent years, perhaps out of a sense that in an increasingly pluralistic religious environment, Christians (like others) are entitled to pray using their own name for God.

Most notably, Baptist pastor Rick Warren, giving the invocation at Barack Obama’s 2009 inauguration, prayed “in the name of the one who changed my life, Yeshua, Isa, Jesus [Spanish pronunciation], Jesus”—but only after saying that Americans were “united not by race, or religion, or blood, but to our commitment to freedom and justice for all.” That is to say, Warren made clear that he accepts the United States as a religiously plural place.

Borowicz, it seems, does not. As a girl she attended a Baptist school in Florida, matriculated at a Pentecostal college in California, taught fourth grade at a Christian academy and, before moving to central Pennsylvania a few years ago, ran an organization to sponsor school prayer rallies. Her husband is an associate pastor at a (non-denominational) evangelical church.

She is, in other words, straight out of Christian right central casting. Forgive her, for she does not know what her country is about. 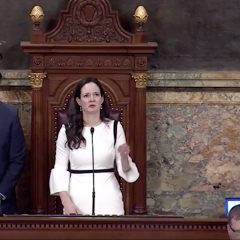