(RNS) — Benjamin Netanyahu’s apparent election victory in Israel this week promises to bring more of the same: a right-wing governing coalition led by the country’s longest-serving and arguably most conservative prime minister to date.

But Netanyahu’s narrow gains in Tuesday’s (April 9) parliamentary elections widens the gulf between Israel and American Jews, who trend liberal and tend to vote Democratic in U.S. elections.

Netanyahu’s main rival, Benny Gantz, a centrist former military chief, appeared to come close to victory on Tuesday, but by early Wednesday, as vote counting progressed, Netanyahu appeared to have an edge and Gantz conceded. Under Israel’s law, it is now up to President Reuven Rivlin to nominate the leader of the party he thinks will have the best chance at forming a government. Tuesday’s close vote favors Netanyahu, as he is more likely to be able to form a government with  ultra-Orthodox Jewish members of parliament and other right-wing parties.

In the past, Jews in the U.S. have united behind Israel’s premier regardless of personality or party. But Netanyahu has alarmed many American Jews with his hawkish politics — including his last-minute campaign pledge to annex large chunks of the West Bank — that further erode any prospect of a future Palestinian state.

“Netanyahu is the most polarizing prime minister as far as American Jews are concerned,” said David A. Halperin, executive director of the Israel Policy Forum, a think tank in New York that advocates for a two-state solution between Israelis and Palestinians.

American Jews largely favor a two-state solution to the Palestinian conflict, often pointing out that denying some 3 million West Bank Palestinians the right to vote will make it impossible for Israel to be both a Jewish and a democratic state, which American Jews see as a Jewish value.

Netanyahu’s growing allegiance to President Trump and the Republican Party has become a further stumbling block. 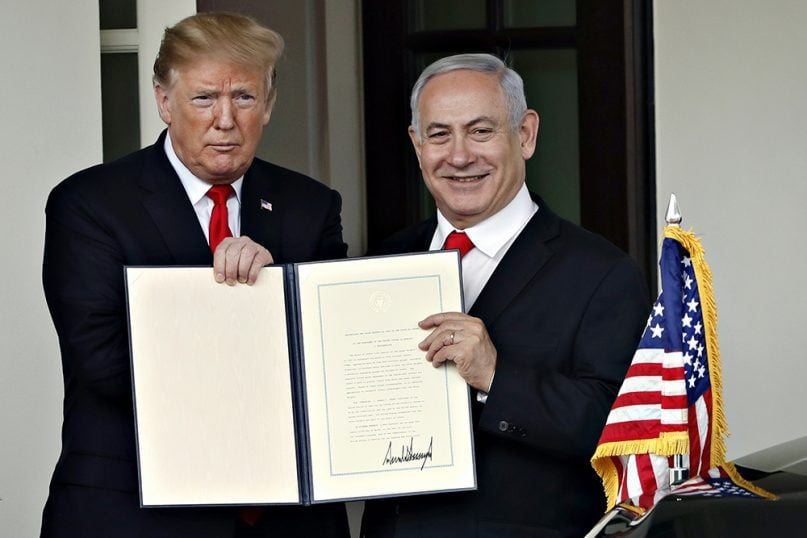 “The Trump-Netanyahu alliance has absolutely alienated the vast majority of American Jews who are not supportive of the Trump administration or the Netanyahu administration,” said Jill Jacobs, executive director of T’ruah: The Rabbinic Call for Human Rights.

Trump has cut off aid to Palestinian groups, and ended funding for a United Nations agency that helps Palestinian refugees. He also moved the American Embassy to Jerusalem, withdrawn the U.S. from the Iran nuclear deal and more recently recognized Israel’s 1981 annexation of the Golan Heights.

Not coincidentally, all of these steps were thought to have directly helped Netanyahu’s chances in this week’s election.

About 76% of U.S. Jews voted for Democrats during the 2018 midterms, according to a GBA Strategies poll conducted for the liberal Jewish advocacy group J Street. Only 24% of American Jews voted for Trump in 2016; 71%  favored Hillary Clinton.

But in Israel, where Trump is highly respected, giant campaign billboards went up showing Netanyahu and Trump both wearing red ties, shaking hands and grinning for the camera.

In 2017, Netanyahu nixed a plan to create a permanent egalitarian prayer space at the Western Wall. The site is controlled by Israel’s Orthodox establishment, much to the consternation of the Conservative and Reform branches that dominate the U.S. Jewish landscape. Both groups have for years advocated for a right to give women the opportunity to pray as equals there. (Gantz told a Jewish audience on a recent visit to the U.S., “The wall is long enough to accommodate everyone.”)

Netanyahu’s coalition, which includes Orthodox religious parties, has further entrenched the monopoly of Israel’s Chief Rabbinate, which controls all marriages and divorces. By extension, that means the Chief Rabbinate also decides Jewish identity, since the ability to marry as a Jew rests on the Orthodox determination of whether the bride and groom both have a Jewish mother.

“When Israel moves away from religious pluralism and towards an Orthodox monopoly on the Jewishness of Israel, that’s another place where we see gaps forming between the Israeli government and American Jews,” said Libby Lenkinski, vice president for public engagement at the New Israel Fund, which supports civil rights, religious pluralism and Jewish-Arab coexistence.

Leaders of Conservative and Reform branches of Jewish life in North America did not disguise their disappointment with Netanyahu’s apparent victory, even as they pledged to try to work with him.

“We will work with any Israeli government, but we will not stop expressing our support for Israelis who should have the right to practice their religion as they see fit,” said Rabbi Debra Newman Kamin, president of the Rabbinical Assembly, the international association of Conservative rabbis.

Rabbi Rick Jacobs, president of the Union for Reform Judaism, which represents the largest branch of Jewish life in the United States, predicted that American Jews would continue to support Israel under a new coalition led by Netanyahu. But he added:

“Our allegiance is not to an individual or to a party,” Jacobs said. “We can love Israel and also have a respectful critique. We can do that in the United States and we have to have a mature Zionism that’s able to both love and critique.” 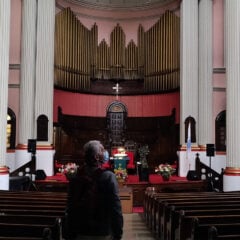 News
Harlem is home to an important part of Jewish history in New York
Follow us on Facebook!
Submit your photos to RNS