(RNS) — Each week Religion News Service presents a gallery of photos of religious expression around the world. This week’s gallery includes several elections, restorations at Notre Dame Cathedral and more. 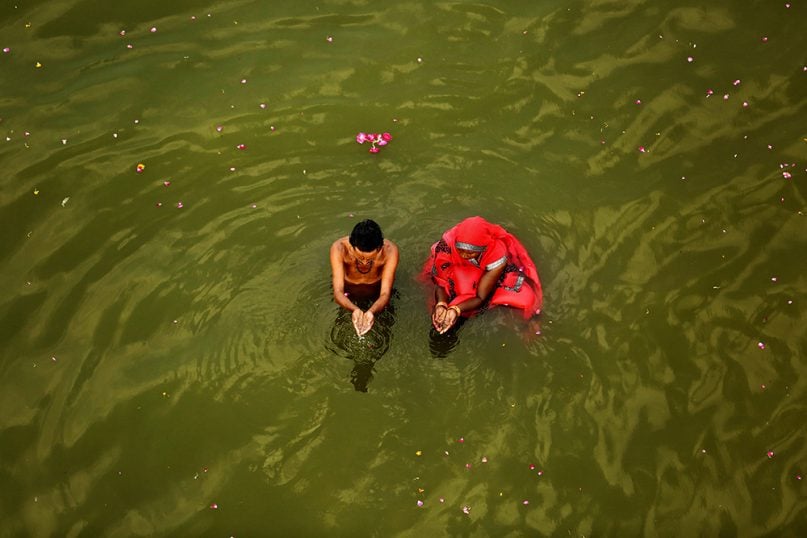 A couple performs morning rituals in the River Ganges on the first day of the nine-day Hindu festival of Navratri on the outskirts of Prayagraj, in the northern Indian state of Uttar Pradesh, India, on April 6, 2019. Navaratri, or the festival of nine nights, consists of three days each devoted to the worship of Durga, the goddess of valor, Lakshmi, the goddess of wealth, and Saraswati, the goddess of knowledge. (AP Photo/Rajesh Kumar Singh) 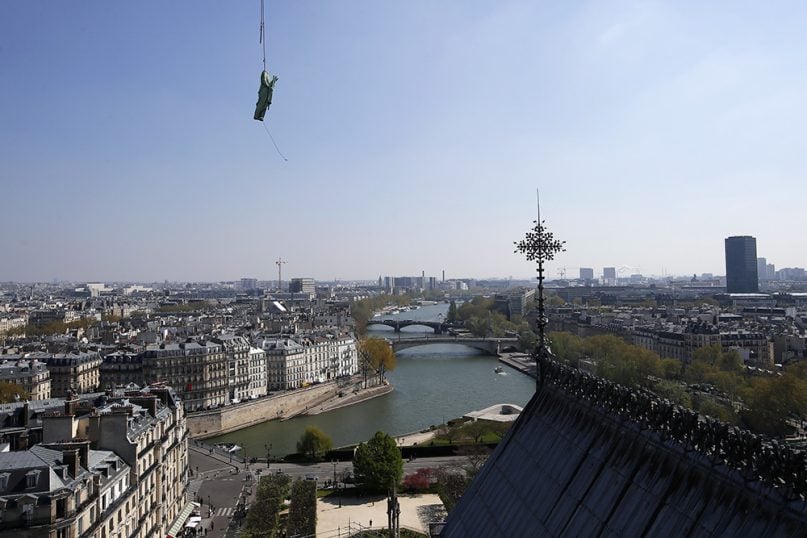 The statue of St. Andrew is lowered from atop Notre Dame Cathedral on April 11, 2019, in Paris, France. Sixteen greenish-gray copper statues, representing the twelve apostles and four evangelists, came down to earth for the first time in over a century as part of restorations at the famous Parisian cathedral. (AP Photo/Francois Mori) 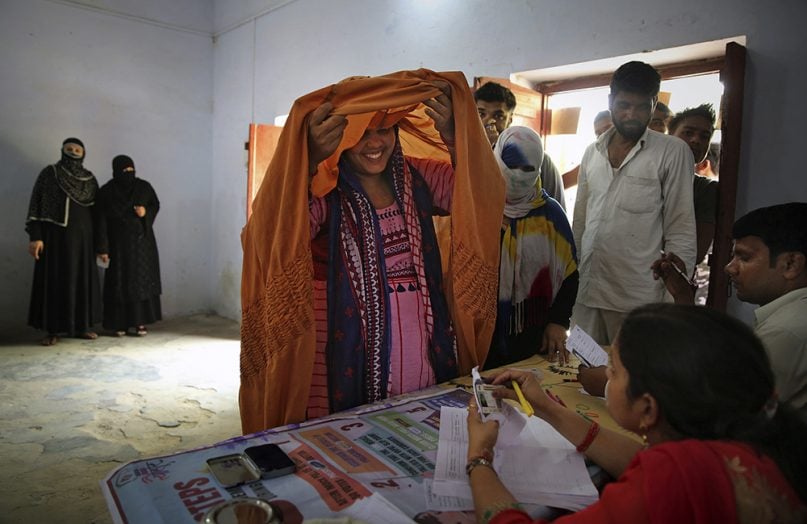 A Muslim woman lifts her veil to identity herself to a polling agent before casting her vote in Shahpur, a village near Muzaffarnagar, Uttar Pradesh, India, on April 11, 2019. (AP Photo/Altaf Qadri) 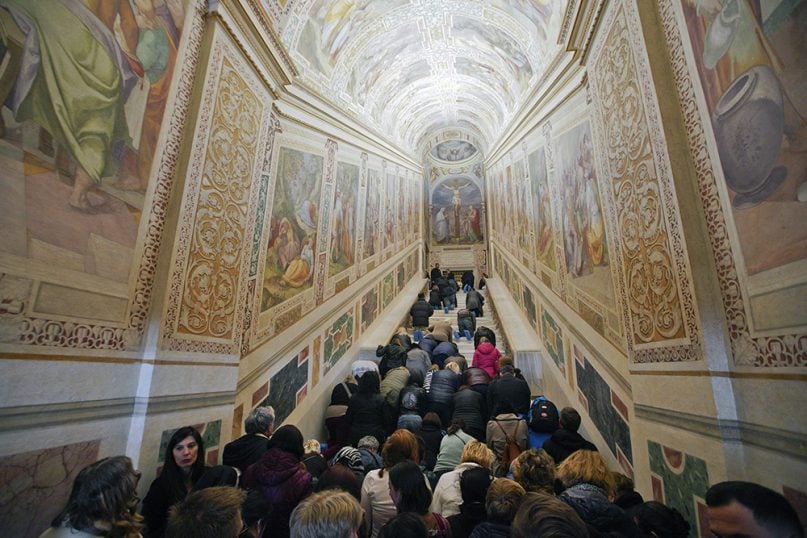 Faithful kneel on the newly restored Holy Stairs (Scala Sancta), which by Roman Catholic Church tradition are the stairs Jesus Christ climbed on his way to his trial in Jerusalem, at a special opening, in Rome, on April 11, 2019. The marble steps will be accessible until June 9, 2019, the Feast of the Pentecost, after which their walnut wood covering, ordered by Pope Innocent XIII in 1723 to protect them, will be reinstalled. (AP Photo/Andrew Medichini) 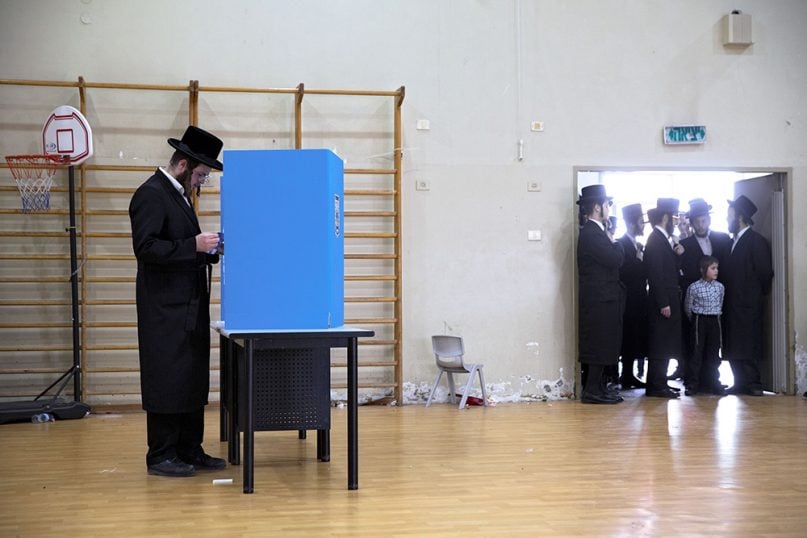 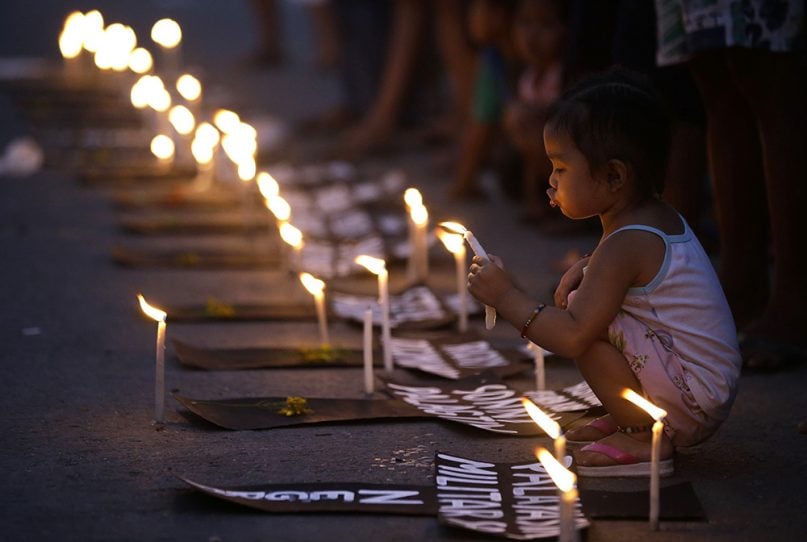 A girl at a rally in metropolitan Manila, Philippines, holds a candle beside paper crosses bearing the names of the dead from Negros Oriental province, on April 8, 2019. Philippine police recently said that 14 suspected communist rebels were killed after they opened fire during raids last March 30 in Negros Oriental, but rights groups countered that the men were farmers and the latest victims of extrajudicial killings. (AP Photo/Aaron Favila) Nazi concentration camp survivor Petro Mishuk, of Ukraine, passes the camp entrance with the slogan ‘To Each His Own’ (Jedem das Seine) prior to a minute of silence in memory of the victims at commemoration ceremonies for the 74th anniversary of the liberation of the former Nazi concentration camp Buchenwald near Weimar, Germany, on April 11, 2019. On April 11, 1945, units of the 3rd US Army reached Ettersberg Hill. (AP Photo/Jens Meyer) 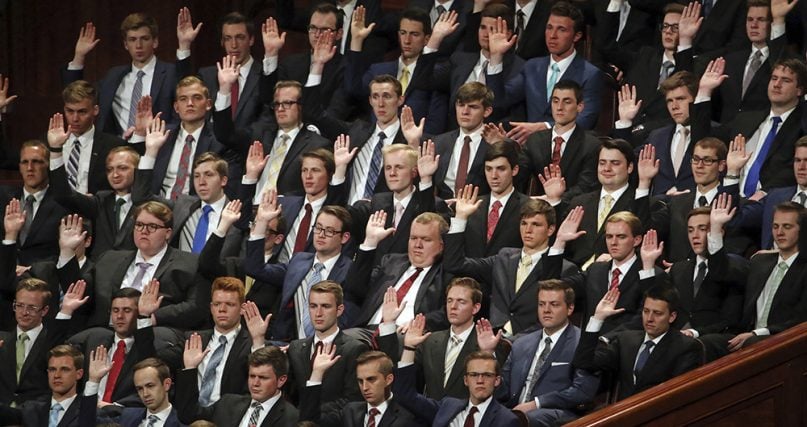 Members of the BYU combined choir raise their hands during a sustaining vote at the Church of Jesus Christ of Latter-day Saints conference on April 6, 2019, in Salt Lake City.  (AP Photo/Rick Bowmer) 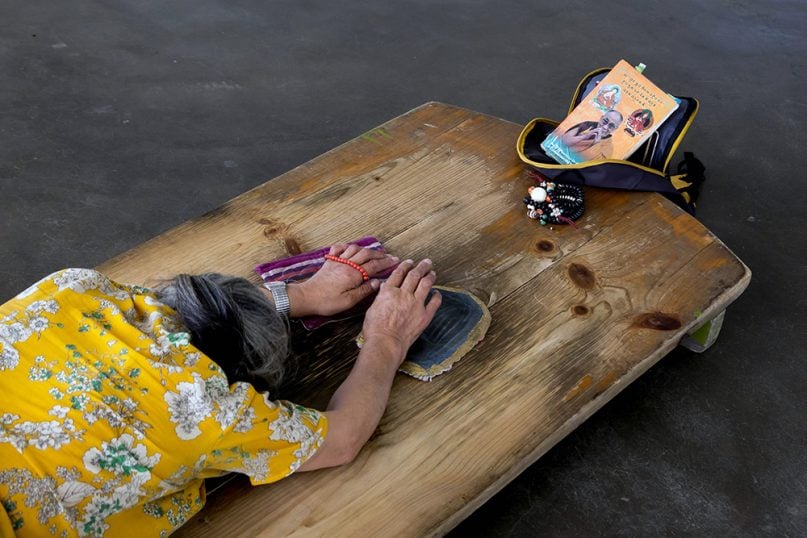 An exiled Tibetan woman prays as she prostrates in front of a portrait of her spiritual leader, the Dalai Lama, in Dharmsala, India, on April 10, 2019. The Dalai Lama was briefly hospitalized in the Indian capital with a chest infection. (AP Photo/Ashwini Bhatia)