NAIROBI, Kenya (RNS) — Dressed in a red turban and black robe, Douglas Okello bowed and gazed at the portrait of the former Ethiopian emperor pinned up in his one-room mud shack in Nairobi’s Kibera slum.

Then he prayed, and smoked a joint.

“I believe in Haile Selassie I, the Ethiopian emperor who will deliver us to the promised land,” said Okello, 28. “This is a calling from Jah, and a true Rastafari must smoke weed to cleanse his soul.”

Rastafarianism, increasingly popular in Kenya, is a faith that started in the Caribbean island of Jamaica in the 1930s after the coronation of Haile Selassie I as king of Ethiopia. Rastafarians regard Haile Selassie as the God of the black race and believe he will one day return all black people living in so-called exile — outside Africa — as the result of migration and the slave trade back to the continent.

Okello, who has been a Rastafarian for five years, said he joined the movement after he developed a liking for reggae music, which grew out of Rastafarian culture in the West Indies, while studying at the University of Nairobi. Reggae musicians singing about how black people were oppressed spoke to him, he said.

Rastafarians don’t cut their hair but grow it, uncombed, into dreadlocks. They smoke marijuana and reject materialist values in favor of a strict oneness with nature. They tend to be vegetarian and eat only unprocessed foods. 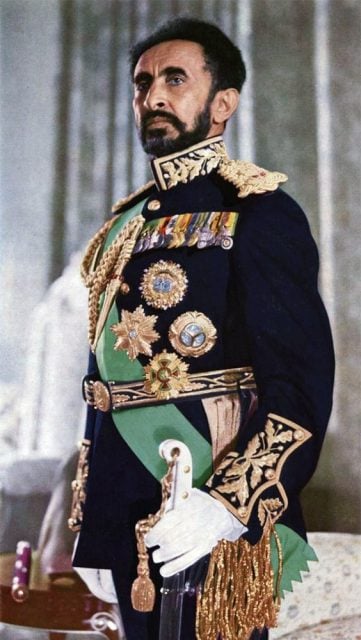 Ethiopian Emperor Haile Selassie I, in 1970, is regarded by Rastafarians as the God of the black race. Photo courtesy of Creative Commons

“I received a spirit that led me to start growing dreadlocks and learn how to smoke marijuana,” Okello explained. “If you are a true Rastafarian, everything changes and you start to understand the Bible. I don’t consume animals nowadays.”

The faith has grown so much among young people in Kenya, its leaders say, that they have developed social media platforms to address issues affecting the youth. Last year, the group Rastafarian Family Elders estimates, more than 1,000 people shifted from Christianity to Rastafarianism in Nairobi’s Kibera slum alone. The Elders said youths in the country have started realizing the religion favors their interests. (There are no official figures on Rastafarians in Kenya, but estimates put the global figure at 1 million.)

Anthony Maiga, a theologian and pastor for the United Methodist Church of Kenya in Nairobi, said the group traces Haile Selassie’s lineage back to King Solomon and the Queen of Sheba, and, through King David’s line as described in the New Testament book of Matthew, to Jesus.

But Maiga said the faith has seen rapid growth because many young people see themselves reflected in the language and behavior of Rastafarians.

“Youths love something that does not restrict them, like smoking and abusing drugs, listening to secular music and sharing things instead of working and paying for their own,” said Maiga. “The sect encourages such behavior and obviously they are likely to get more youths.”

Jacob Maina, 35, who also lives in the slum, confirmed that he joined the faith because he was looking for freedom. Born into a Protestant Christian family, he said the faith restricted him: He could not smoke marijuana, question oppressors or listen to his favorite reggae musician, Bob Marley.

“I was actually in prison when I was a Christian,” he said. “Christianity condemns everything that youths enjoy. The Rastafari faith allows youths to live good life. We don’t give offering on Sabbath day and we are allowed to smoke marijuana and listen to reggae music.”

But its adherents here say that many new Rastafarians are attracted by the social justice and anti-colonialist sentiments that drew Okello.

Rastafarian Family Elders Ras Malonza, from left, Ras Lojuron and John Wambua, at their social hall during prayers in the Kibera slums in Nairobi on Jan. 23, 2019. RNS photo by Tonny Onyulo

“Youths who are black have been oppressed since the days of colonization,” said Ras Malonza, a Rastafarian leader in Nairobi. “They were made slaves to whites and that’s the reason they found themselves in Jamaica.

“Jamaica is hell to us and Ethiopia is our heaven,” he added. In time, he said, “we will be repatriated to Ethiopia, which is our promised land by Haile Selassie. Black youths will no longer be oppressed and we will live in freedom and peace.”

Malonza, 43, who was once a staunch Catholic, said he regrets the years he wasted not believing in Haile Selassie. As evidence that Rastafarians are the true believers, he quotes the Old Testament book of Jeremiah: “For the hurt of the daughter of my people am I hurt; I am black; astonishment hath taken hold on me.”

“We are the only religion that follows the Bible,” said Malonza. “Our God is black and the Bible confirms that.”

Recently, a court in Nairobi ordered officials at Olympic High School in Kibera slum to admit a Rastafarian student after she was refused due to her dreadlocks.

“It’s time for people to understand and respect our faith just as we respect other religions,” said Ras Lojuron, a member of the Rastafarian Family Elders.

“The police should treat us well,” he said. “We are a religion just like Christianity and Islam.”