(RNS) — Days before Good Friday, the Rev. Stacey Hamilton continued to contemplate what she would preach about some of the last words of Jesus: “Truly I tell you, today you will be with me in paradise.”

Hamilton, one of seven black women preaching at “Women With a Word,” a service hosted by the Fellowship of Churches of Atlantic City and Vicinity at Faith Baptist Church in Pleasantville, N.J., prayed and did her “due diligence” by studying the meaning of the passage’s original Greek as she prepared to write her sermon.

In a growing tradition, at least a dozen churches across the country are hosting Good Friday services this year that feature seven African American female preachers, expounding in seven short sermons on the last seven phrases uttered by Jesus before his crucifixion.

“It’s a big deal because historically black women have been underrepresented,” said Hamilton, associate pastor of innovation and engagement at Mount Zion Baptist Church in Pleasantville. “There’s still a lot of traditional views as they relate to women in leadership and having the ability to actually declare the Word and people actually come out and listen to women,” added the pastor, who also works as a computer engineer. “It’s definitely a shift within the last couple of years.”

Though some black women preachers recall being featured in Good Friday services decades ago, the phenomenon got a boost five years ago, when seven millennial black women preachers spoke at a Chicago church for an event sponsored by ShePreaches, a group that creates opportunities for younger African American clergywomen. The organization developed an online toolkit to encourage services on Good Friday featuring young adult black women in pulpits using womanist interpretations of the Bible.

The increased attention comes at a time when womanist theology, which focuses on the intersection of gender, race and class and empowerment of the marginalized across the African diaspora, is gaining momentum.

In March, womanist scholars of religion gathered in Washington, D.C., to celebrate their first consultation, at the city’s Howard University School of Divinity, in 1988. Last April, a Center for Womanist Leadership opened at Virginia’s Union Presbyterian Seminary with Alice Walker, the novelist and poet and one of the founders of the womanist movement, as the keynote speaker for the inaugural gathering.

The Rev. Leslie Copeland-Tune, director of Ecumenical Advocacy Days for Global Peace with Justice, said black women, similar to the women who remained at the foot of Jesus’ cross, can speak of resilience despite difficult circumstances facing their communities.

“It is also significant that the collective Black church is recognizing our gifts and allowing them to be exercised in pulpits across the country during the holiest week of the Christian calendar,” said Copeland-Tune, who will be preaching at a predominantly black church in Largo, Md. “Space is finally being made for us to edify God’s people. There are cracks in the stained-glass ceilings.”

The Rev. Jacqueline Thompson, the first woman pastor-elect of the predominantly black Allen Temple Baptist Church in Oakland, Calif., said in an emailed statement that African American women can particularly relate to Jesus’ suffering and injustices that led to his crucifixion. 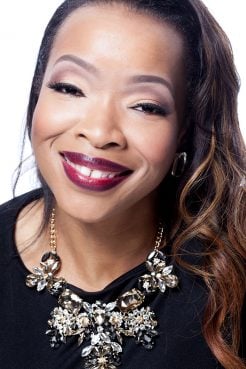 “Many live and work in the reality of what Womanist Scholar Jacquelyn Grant calls the ‘triple oppression’ of race, class and gender,” said Thompson, whose church’s Seven Last Words service will feature “six African American women and one Euro-American woman who is a daughter of our church.”

“The message of life after death remains a critical one in light of the present day racist, sexist and xenophobic rhetoric and policies we see rampant in today’s society.”

The Rev. Aundreia Alexander, associate general secretary of the National Council of Churches, cited more than half a dozen churches featuring seven black women speaking at Seven Last Words services, from “Womanists of the Bay” in Berkeley, Calif., to “Sisters at the Cross” in Alexandria, Va.

Some multiple-sermon Good Friday services include preaching from people of a variety of racial and ethnic groups, and men and women. The service at Calvary Baptist Church, a predominantly white church in Washington, D.C., led by a married lesbian couple, is called “The Seven Last Words of Jesus: An Account from Women of the Global South.” Chicago’s Trinity United Church of Christ will highlight “6 Daughters of Thunder Plus 1 Son of Thunder,” with the last of Jesus’ sayings being addressed by the Rev. William J. Barber II, a North Carolina pastor and president of the social-justice activist organization Repairers of the Breach.

The tradition’s inclusion of black women may be a result of concerted efforts to put them in pulpit positions. 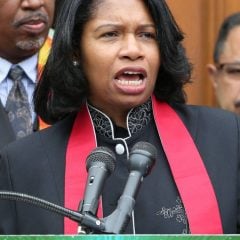 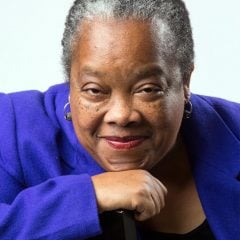 More than a decade ago, the Rev. Valerie Bridgeman, dean of the Methodist Theological School in Ohio, founded WomanPreach! Inc., which offers a Jarena Lee Preaching Academy to train women of African descent, and expanded it to include women and men.

She said many black women’s sense of calling to preach is now being undergirded by theological training.

“I think more women have gone to seminary and so they have gotten the degrees, not just the call but the training with that call,” said Bridgeman. “And so they’re unmoved by what might have been a historic resistance to their call because they’ve solidified for themselves their call.”

The Association of Theological Schools reports that the number of black women graduates of its affiliated schools almost tripled from 1988 to 1998 — increasing from 151 to 444. The number more than doubled again by 2018, reaching 994.

The Rev. Christine A. Smith, author of “Beyond the Stained Glass Ceiling: Equipping and Encouraging Female Pastors,” said she’s seen an uptick over at least a decade in instances of seven black women preaching on Jesus’ seven last sayings, including in her Akron, Ohio, area.

“This is a wonderful movement, but there are still major barriers that remain for women in ministry,” said Smith, a pastor dually aligned with the American Baptist Churches USA and the Progressive National Baptist Convention, who is set to speak at a “He Is Risen” Seven Last Words service with six other black women preachers. 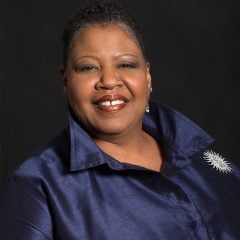 The Rev. Christine A. Smith. Photo courtesy of MotoPhoto 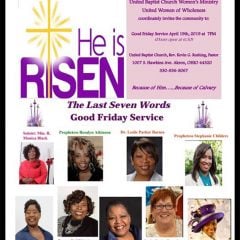 Hamilton and others say African American women preachers are likely to address issues of justice during their 10 minutes or so in the pulpit during the Seven Last Words services. The New Jersey pastor said she intends to mention human trafficking and the stricter requirements proposed by the Trump administration for some who have qualified previously for the Supplemental Nutrition Assistance Program.

Hamilton studied several years ago at Bridgeman’s Jarena Lee Preaching Academy (named for the first African Methodist Episcopal Church female preacher) and said it was “transformational” in helping her learn about womanist preaching. She then recognized that she brings a unique perspective to preaching and not “the same as if a man is standing up to preach.”

Thus, the associate pastor said, she thinks it’s fitting that some churches are highlighting black women in their pulpits on one of the holiest days in the Christian calendar.

News
After Roe’s fall, Black churches support some or all reproductive health options
Follow us on Facebook!
Submit your photos to RNS