(RNS) — Fauja Singh was born to a peasant Sikh family in Punjab, India, in 1911. His legs were so weak that he couldn’t walk until the age of five, and they were so thin that kids in his village teased him by calling him danda, or stick.

Fauja couldn’t walk all the way to their nearby school, but as he got older and stronger, he began toiling on the family’s farm beside his father. He never learned to read because he didn’t go to school, and even now, at the age of 108, he still has not learned to read.

Singh eventually got married and took on a farm of his own. He taught his own children to farm as well. He loved his family and was close with every single member, and so after the deaths of his wife, son, and elder daughter, Fauja sank into depression and struggled for some time with his emotional health.

After moving to England to live with his son, Fauja Singh found himself without much of a social life. He would pass the days sitting in the living room, watching television. Then, one day, he saw the London Marathon and felt inspired.

So Fauja Singh began his running career at the ripe age of 81. By the time he was 88, he was training with a seasoned runner and coach, Harmander Singh, and just a few years later caught the world’s attention when, at the age of 89, he shattered the previous world marathon record in his age bracket by an astonishing 58 minutes.

He is the only person in human history known to have run a marathon after turning 100 years old. He even ran one after his 101st birthday. 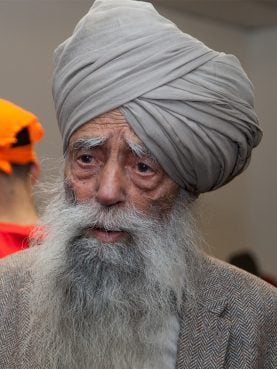 This month, Singh turned 108, and though he has been retired since 2012, he still holds all the age-related world records, from the 100 meters to the marathon for men over 100, many of which are so remarkable that experts believe they will stand for a long time.

Though he stopped making ceremonial appearances at major races after he turned 104, this running celebrity still walks about five miles a day around the London neighborhoods where he lives, visiting different Sikh places of worship (gurdwaras), both for worship and camaraderie. Walking remains his preferred mode of transportation, though admittedly he still harbors a love for racing motorcycles.

For Singh, running became his saving grace. For the rest of us, his running career traverses key issues like classism, racism, literacy bias, ableism and ageism.

I am one of many whose lives Singh changed entirely. I first learned about him while watching an Adidas television commercial. I was 20 years old and passionate about sports but had never seen a turbaned Sikh (like me) featured alongside legends like Muhammad Ali and David Beckham.

I not only began following Singh’s career, I began running long distance like him. The day he became the first 100-year-old to complete a marathon, I decided it was time to let go of all my excuses and sign up for my first.

Later that fall, I ran in the New York City Marathon, the world’s largest, along with nearly 50,000 other runners.

Exhausting and grueling and painful, running a complete marathon was one of the most moving things I had ever experienced. Crossing the finish line after months of training made me feel like I could accomplish anything to which I put my mind. I signed up for my next marathon almost immediately, and I’ve averaged a marathon and a handful of half-marathons every year since.

My New York marathon run is especially meaningful to me because, in the post-9/11 backlash that led to the targeting of Sikhs, Muslims, Arabs and South Asians, Fauja Singh registered for the New York City Marathon as a way to create awareness about the Sikh community. Perhaps predictably, he suffered racist abuse from spectators while running the marathon that year.

This is typical of how Fauja Singh has used his celebrity for good. He has become an advocate for health and wellness, encouraging people of all ages to exercise, eat healthy and treat the world and all creation with respect. He supported People for the Ethical Treatment of Animals (PETA) in campaigns to support vegetarian diets, and he has spoken repeatedly about the key to a long life being balanced, nutritious eating. He refuses to accumulate personal wealth from his sponsorships, insisting instead that all sponsorship money be donated for charity.

In his more than 100 years on this earth, Fauja Singh has accomplished the implausible, time and time again, with persistence, dignity, grace and an attitude of service. And he’s done it with such courage and grace that he’s touched thousands of lives around the world along the way.

So here’s to a happy 108th birthday to you, Fauja Singh. And best wishes for many, many more years of happiness.

(Simran Jeet Singh’s children’s book on the life of Fauja Singh will be published next spring by Kokila (Penguin) and is illustrated by Baljinder Kaur.)