(RNS) — Civil rights organizations have dropped a federal lawsuit against the owners of an Oklahoma gun range after it removed a sign declaring the business a “Muslim-free establishment.”

The owners of the Save Yourself Survival and Tactical Gun Range in Oktaha, Okla., removed the sign in December, nearly three years after the American Civil Liberties Union, the ACLU of Oklahoma and the Council on American-Islamic Relations’ Oklahoma branch filed a lawsuit alleging violation of federal public accommodations law.

The civil rights advocates filed to dismiss the lawsuit Tuesday (April 23), saying that the gun range owners have affirmed that they will not exclude Muslim customers and that they do not intend to repost the sign.

“We are pleased that the defendants in this case decided to take down their anti-Muslim sign, and that they affirmed their commitment to complying with the law,” said Heather Weaver, senior staff attorney for the Project on Freedom of Religion and Belief at the ACLU, in a statement. “No customer should be excluded from a business based solely on their faith.” 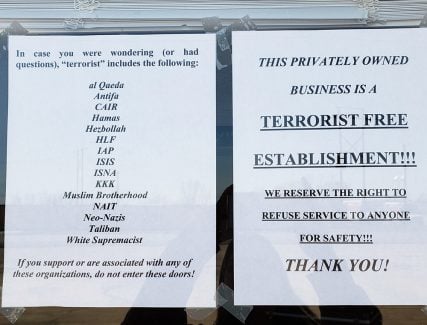 The new sign at Save Yourself Survival and Tactical Gun Range in Oktaha, Okla. Photo via Facebook

Instead, after last month’s New Zealand mosque massacre, the owners have put up a sign saying the gun range is a “terrorist-free” zone. The new sign includes a long list of groups it says will be excluded, including members of CAIR and the Islamic Society of North America.

The gun range’s lawyers are claiming the case’s dismissal as a win as well.

Robert Muise, an attorney with the American Freedom Law Center, which defended the gun range, said the dismissal of the “fabricated nonsense case” was a “big victory” for the gun range’s management.

“This is a dangerous lawsuit set up to send an armed individual into a gun range and create a controversy over the sign,” Muise said.

He told Religion News Service that the gun range’s policy – which he said was always against “terrorists” and never against any religion – had not changed since the lawsuit was filed and that the owners had not taken the sign down because of the lawsuit.

After the gun range made headlines for its original sign, CAIR-Oklahoma board member and plaintiff Raja’ee Fatihah, a Muslim U.S. Army reservist, visited the range and sued the owners after they allegedly turned him away from their business when he told them he was Muslim.

Muise said the gun range does not discriminate solely on the basis of religion. Fatihah was turned away, Muise claimed this week, because he was belligerent and walked in “armed to the teeth with a military rifle slung over his shoulder and a recording device in his pocket.”

But Muise then seemed to contradict himself, saying, “When they found out he has ties to CAIR, an organization that has ties to terrorism, they said you’re not allowed to shoot at the range.”

(Several independent fact-checking groups have noted over the years that the U.S. government does not consider CAIR a terrorist group, and counterterrorism experts have dismissed long-standing allegations against the group.) 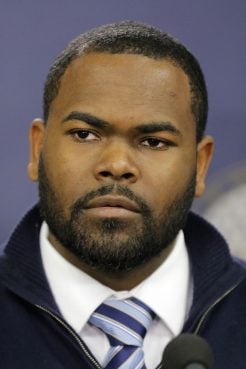 “I wasn’t looking for any trouble,” he wrote in a blog for HuffPost in 2016. “ … as soon as I identified myself as Muslim, things took a frightening turn. The owners of the range grabbed their handguns and demanded to know whether I was there to ‘commit an act of violence’ or as part of a ‘jihad.’”

Ultimately, Fatihah wrote, the owners “forced” him to leave.

Gun range owner Nicole Neal and manager Chad Neal claim the original sign did not represent their business policy but was a form of political protest after a 2015 shooting at the military recruiting station in Chattanooga, Tenn. The shooter, a Muslim who told investigators he had frequented a local gun range, killed four Marines in the attack.

“The law does not require a gun shop or gun range owner — owners of an inherently dangerous business — to equip or train the next jihadist,” American Freedom Law Center senior counsel David Yerushalmi said in a statement after the lawsuit was filed. “Not only do our clients have a right to refuse to serve someone they believe to be a public safety risk, they have an obligation to their other customers, employees, and the community to do so.”

From the beginning, Muise said, the gun range has had a policy of refusing to serve anyone who is “either directly or indirectly associated” with terrorism or an organization linked to terrorism.

The Council on American-Islamic Relations is included among a wide-ranging list of so-called terrorists – along with the Islamic Society of North America, Muslim Brotherhood, the Ku Klux Klan, neo-Nazis, white supremacists, Antifa, al-Qaida, Hamas, ISIS and other movements – that the gun range has posted at its entrance.

Neither Fatihah nor anybody associated with CAIR is “ever going to step foot at the gun range,” Muise said. “And if they do, (the owners) are going to call the sheriffs.”

Adam Soltani, executive director of CAIR-Oklahoma, said the dropped lawsuit was a “victory” against “policies of segregation,” regardless of the gun range’s policies against CAIR.

“CAIR is not on trial here, and we don’t want to make this about who we are and what we do as a civil rights organization,” Soltani said. “Their lawyer may say that they didn’t change their policy, but they removed the sign that excluded Muslims and which we had an issue with. So it wasn’t necessary for us to continue the lawsuit once that sign came down.”

The gun range’s original policy was laid out in a Religion News Service interview with the owners before the lawsuit was filed.

“I didn’t want any terrorists, or Muslims, cult, whatever you want to call them, training on my gun range,” manager Chad Neal told RNS in 2015. “There is a military recruiting station in the mall in Muskogee, and I thought this was one thing I could do to help protect our local soldiers.

“I know (what) the Quran says about lying to infidels and killing infidels,” he said in the same interview. “I don’t want them practicing those religious beliefs on my range.”

That was the kind of language that drew Muslim and civil rights activists’ attention in the first place.

“Muslims are an integral part of communities across Oklahoma,” said Veronica Laizure, civil rights director of CAIR Oklahoma, in a statement. “Discriminating against them is not only unlawful, it’s un-American and runs counter to the religious freedom principles on which our country was founded.”