(RNS) — Presidential candidate Pete Buttigieg says his marriage to another man brings him closer to God.

Most voters probably don’t care much, but a recent survey suggests they’d be more open to a gay candidate than an evangelical Christian one.

According to a February 2019 NBC/Wall Street Journal poll, 68 percent of registered voters said they would be comfortable or enthusiastic about a gay or lesbian candidate. That’s a marked shift from 2006 when only 43 percent of Americans said the same.

The same survey indicated that an evangelical Christian candidate may actually face a steeper uphill battle to win over voters: Just over half (54 percent) of registered voters said they would be comfortable or enthusiastic about an evangelical Christian candidate, with 42 percent saying they would have reservations or be very uncomfortable with their run.

Only 30 percent of those polled said they would have reservations or be very uncomfortable with a gay or lesbian candidate.

Buttigieg, the Episcopalian mayor of South Bend, Indiana, has risen in the polls in recent months thanks in part to his willingness to talk openly — and frequently — about his faith. The Afghanistan veteran has repeatedly said he sees no disconnect between his faith and his sexuality.

“It can be challenging to be a person of faith who’s also part of the LGBTQ community and yet, to me, the core of faith is regard for one another,” Buttigieg said during a CNN town hall on Monday (April 22). “And part of God’s love is experienced, according to my faith tradition, in the way that we support one another and, in particular, support the least among us.”

Buttigieg has also voiced harsh criticism of conservative Christian politicians such as Vice President Mike Pence and has called for a revival of the religious left. 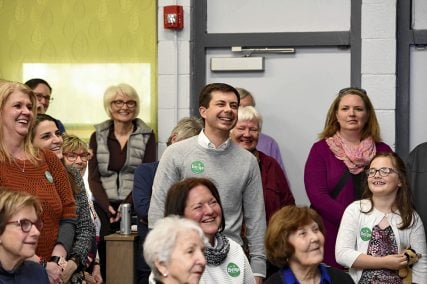 South Bend Mayor Pete Buttigieg laughs before he speaks to a crowd about his presidential run during the Democratic monthly breakfast at the Circle of Friends Community Center in Greenville, S.C. on March 23, 2019. (AP Photo/Richard Shiro)

His views likely resonate widely among his fellow members of mainline Protestant Christian denominations, some of which — such as the Episcopal Church, Presbyterian Church (USA) and the Evangelical Lutheran Church in America — have been ordaining LGBTQ people and allowing clergy to officiate same-sex weddings for years.

Franklin Graham, the CEO of Samaritan’s Purse and son of famous evangelist Billy Graham, is not convinced.

After this week’s town hall, Graham fired off a series of tweets that challenged Buttigieg’s remarks.

“Mayor Buttigieg says he’s a gay Christian,” Graham wrote. “As a Christian I believe the Bible which defines homosexuality as sin, something to be repentant of, not something to be flaunted, praised or politicized. The Bible says marriage is between a man & a woman — not two men, not two women.”

Greg Smith, associate director of the Pew Research Center, pointed out that even white evangelicals are trending in Buttigieg’s direction on the issue of same-sex marriage.

“Note that while most white evangelicals remain opposed to same-sex marriage, they (like many other groups) have grown more supportive of same-sex marriage over time,” he said in an email that cited Pew data.

Matthew Vines, author of “God and the Gay Christian: The Biblical Case in Support of Same-Sex Relationships,” believes that leaders such as Graham are either unaware of or unconcerned with the disconnect between their views and those of the general public. 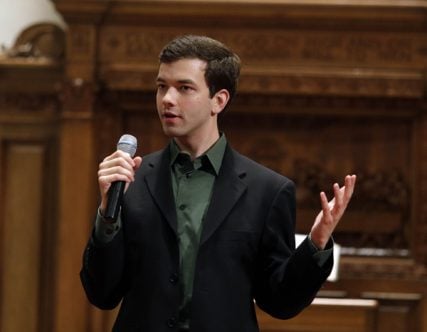 “Part of what makes this different is that Franklin Graham was using this rhetoric that is mainstream in the conservative church in a much broader arena, where the audience is very different,” he told Religion News Service.

Vines said voters — especially Democrats — may be skeptical of the evangelist’s criticism of Buttigieg given Graham’s fervent support for President Donald Trump, whose rhetoric and actions many view as immoral.

“I think a lot of conservative Christian leaders, especially those who have aligned themselves with Trump, are not really aware the extent to which they have decimated their moral authority and ability to speak to this subject in the public square,” he said.

Still, John Fea, professor at Messiah College and author of “Believe Me: The Evangelical Road to Donald Trump,” characterized the whole debate as “much ado about nothing,” politically speaking.

“I do not think evangelicals (of any race) are ready yet for a gay president and few of them will vote Democratic, so in some ways the point is (moot),” he said in an email. He added that if evangelicals did back a Democrat, it would most likely be former Vice President Joe Biden.

Fea suggested Buttigieg’s sexuality may not be the biggest obstacle for him to overcome with evangelical voters. Instead, his support of abortion rights is more likely to keep evangelicals from casting their ballot for the Indiana mayor.

“If Buttigieg was pro-life and gay that would be very interesting,” Fea said. “My guess is that many evangelicals would hold their nose and vote for Buttigieg because the life of the unborn is more important.”