(RNS) — Approximately 1.8 billion people around the globe identify as Muslim today, which makes Islam the world’s second-largest world religion. This is a fact.

At the same time, some on the far right in the United States deny that Islam is a real religion. Theologians of different stripes have made this claim in the battle for religious supremacy, but recently it has become a legal argument made to deny Muslim Americans their right to religious freedom. The issue is now the subject of a book,  “When Islam Is Not a Religion: Inside America’s Fight for Religious Freedom,” by Asma Uddin.

Uddin is a legal scholar and lawyer who has represented people of all faith backgrounds in religious liberty cases from trial courts to the Supreme Court. She is the founding editor-in-chief of AltMuslimah, a website dedicated to discussing issues of gender in Muslim communities. She is also executive producer for the Emmy- and Peabody-nominated documentary series “The Secret Life of Muslims.”

I had the chance to speak with Uddin about what’s at stake for the U.S. Constitution and the First Amendment in challenges to Islam’s status as a religion.

Can you explain first of all how Islam could be seen as anything other than a religion?

Honestly, when I first heard the argument “Islam is not a religion,” I had the same question: How is it even possible to think of Islam as something other than a religion? But when I heard the context — a legal case challenging the right to build a mosque — I knew the argument had nothing to do with a philosophical interrogation of “religion” generally. It had everything to do with depriving Muslims of rights. And when that’s the agenda, all kinds of absurdities become possible.

One of those absurdities is the ability and willingness to do to other religions what you would never stand someone doing to your own: taking a warped, out-of-context, ignorant analysis of it and deciding which parts should be afforded legitimacy and which should not.

Is this a new phenomenon?

From the moment the Prophet Muhammad said he was a prophet and messenger of God, he had to contend with claims that he was a false prophet. Necessarily, at the birth of any new religion, it deals with claims of being false. Vis-à-vis the dominant belief system, it is heretical, blasphemous.

The phenomenon I’m dealing with in the book is something else. Yes, today we hear many of the same words: that Muhammad is a false prophet and Islam is a false religion. There are numerous religious leaders, Christian leaders, who are telling this to their congregations as part of their religious sermonizing.

I have no problem with people holding absolutist beliefs about their religion being the correct one and others’ being the wrong ones. What I am contesting is the use of this claim that “Islam is not a religion” to argue for a selective interpretation of the First Amendment and religious liberty protections more broadly. This is an emerging phenomenon, and one that needs our urgent attention.

You claim that labeling Islam as something other than religion is part of a political agenda to dehumanize Muslims.

One historian calls the process “denationalization” — the process by which American Muslims are stripped of their national identity and legal rights, and treated not like other religious believers, but more like American Nazis were during World War II. Other vulnerable minorities, including Catholics, Mormons, and Jews, have been denationalized in the past. Today Muslims are the target. 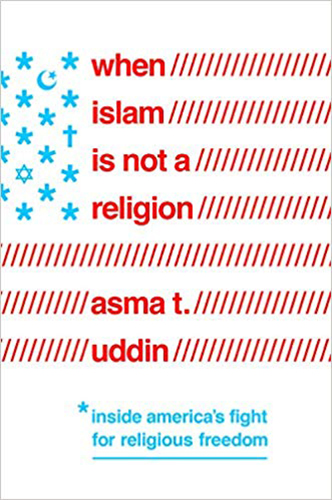 “When Islam Is Not a Religion: Inside America’s Fight for Religious Freedom,” by Asma Uddin. Courtesy image

Dehumanization and denationalization lead to the deprivation of many legal rights, but my book looks at the impact on religious freedom specifically. Religious freedom is considered the “first freedom,” literally and conceptually. It’s covered in the first part of the first sentence of the First Amendment, privileged even above freedom of speech, press, and assembly: “Congress shall make no law respecting an establishment of religion, or prohibiting the free exercise thereof; or abridging the freedom of speech, or of the press; or the right of the people peaceably to assemble, and to petition the Government for a redress of grievances.”

Religious freedom is placed first because if you don’t have the ability to practice what you believe, the other freedoms are irrelevant. But for your religious beliefs to be protected, they have to be considered religious. The U.S. Constitution gives special solicitude to religious beliefs over political or philosophical ones. So, the argument that “Islam is not a religion” goes straight to the heart of the matter: Delegitimize the religiousness of Islam in order to strip Muslims of First Amendment protections.

You say this is not just a threat to the rights of Muslims, but to the broader constitutional right of religious freedom.

For religious liberty to survive at all, it has to be for everyone. To protect only some is to protect none, because if we aren’t consistent in our application of religious freedom, religious freedom will eventually cease to protect anyone. You cannot protect your rights in the long run if you don’t protect others’ rights now.

You don’t have to accept, endorse or even understand other people’s beliefs in order to protect their right to express them. Think of this concept in terms of a quote commonly attributed to Voltaire: “I detest what you write, but I would defend to the death your right to say it.” Religious freedom isn’t even about protecting beliefs. It’s about the person who holds those beliefs. As a human right, religious freedom protects humans, not beliefs.

Importantly, “religious freedom for all” is not about advocating a “free-for-all.” There are limits to religious freedom. Americans can hold any belief they wish, unfettered from government interference. But when they express beliefs through actions, the government can restrict those actions.

Have any attempts to “de-religionize” Islam affected you personally?

In the book, I share the story of my late father, a pioneer in the American Muslim community, who gave so much of himself and his wealth to build that community. He had no idea how his efforts would crumble after his death, reflected perhaps most poignantly in the vandalism of the mosque in South Florida he worked so hard to build.

Unfortunately, that hate has spread to mosques across the nation, and to Muslim grave sites, Muslim religious arbitration, Muslims in religious garb, Muslims in airplanes, Muslims praying in public. And the list goes on.

I have been working on religious liberty for a decade. I am immersed in defending other people’s ability to live out their deeply held beliefs while surrounded by constant attempts to delegitimize my own faith. People want to strip me of the precise rights I am working so hard to defend for others. The experience is jarring.