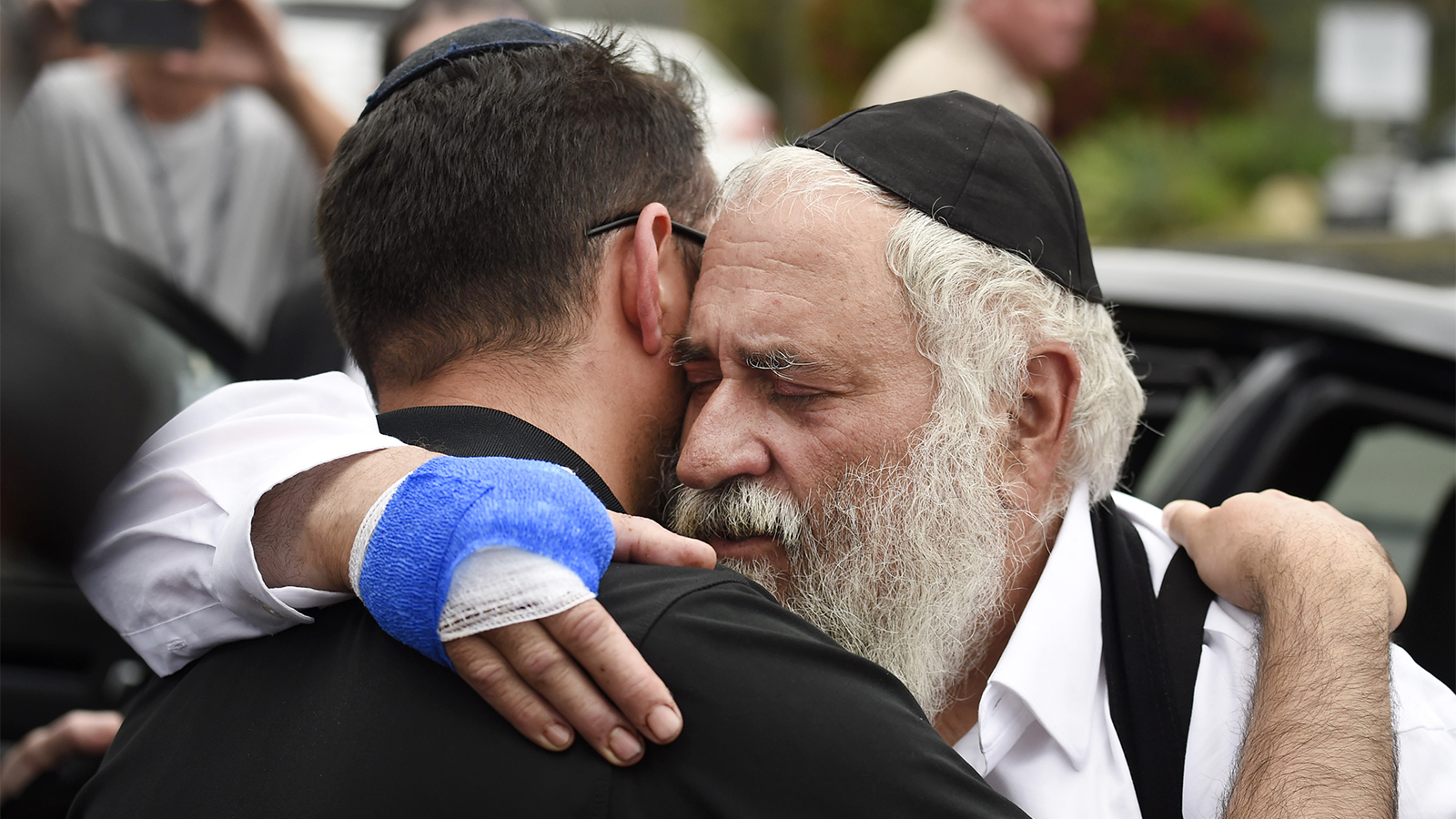 Rabbi Yisroel Goldstein, right, is hugged as he leaves a news conference at the Chabad of Poway synagogue, on April 28, 2019, in Poway, Calif. A man opened fire Saturday inside the synagogue near San Diego as worshippers celebrated the last day of Passover. (AP Photo/Denis Poroy)
May 2, 2019
Joshua Feigelson

(RNS) — Last Thursday, the international print edition of the New York Times published a cartoon depicting Israeli Prime Minister Benjamin Netanyahu as a dog, with a human head and an unusually large nose, being walked by—or, perhaps, walking—President Donald Trump, who was depicted wearing a yarmulke. The cartoon was immediately and vociferously condemned by a wide range of organizations and public figures for indulging in anti-Semitic tropes reminiscent of media in France during the Dreyfus Affair and Germany during the Third Reich.

On Sunday, the Times tweeted an apology and ran a highly critical article of the cartoon by Bret Stephens, one of its own columnists. Stephens recounted the Times editors’ explanation of how the incident came to pass and accepted their account that it was, in essence, an innocent mistake by a single editor in Europe and not a willful act of anti-Semitism.

But that wasn’t the problem, Stephens wrote. “The problem is that its publication was an astonishing act of ignorance of anti-Semitism—and that, at a publication that is otherwise hyper-alert to nearly every conceivable expression of prejudice, from mansplaining to racial microaggressions to transphobia.” By Wednesday the paper had published a self-critical editorial.

It would have been enough that such an image was printed in a major publication. But what made this incident particularly troubling was that it was printed in The Times, which occupies a particular place not only in American journalism but also in American Jewish life.

In his 2013 book, "Jews and Judaism in The New York Times," religion scholar (and relative of New York Times journalists) Chris Vecsey notes that in the three decades between 1970 and September 11, 2001, “something like thirteen percent of Times religion stories — 2,000 out of 15,000, more or less — were focused upon Jewish subjects,” not to mention its coverage of Israel or other articles in which Jews and Jewishness might feature prominently. This during a period when Jews constituted just 2-3 percent of the American population.

Part of the reason for this discrepancy is that the paper is based in New York City, which remains the city, and larger metropolitan region, with more Jews than any other in the world. Another part, it seems, has to do with the outsized representation of Jewish writers and editors at a paper owned by the Ochs-Sulzbergers, an American Jewish family.

Whatever the reasons, for many American Jews there is something categorically different about a story that appears in the Times and one that runs on virtually any other media platform. As Vecsey observes, many American Jews seem to view the Times as both inside and outside the Jewish community — not as inside as, say, the Forward or the New York Jewish Week, but also not as outside as The Washington Post or CBS.

The paper is held to a higher standard, which is best exemplified in what has become a recurring trope of American Jewish life in relation to the Times: calls, by activists and rabbis, to end one’s subscription or hold an advertising boycott of the paper in response to what they view as coverage that is biased, or, in this case, anti-Semitic. 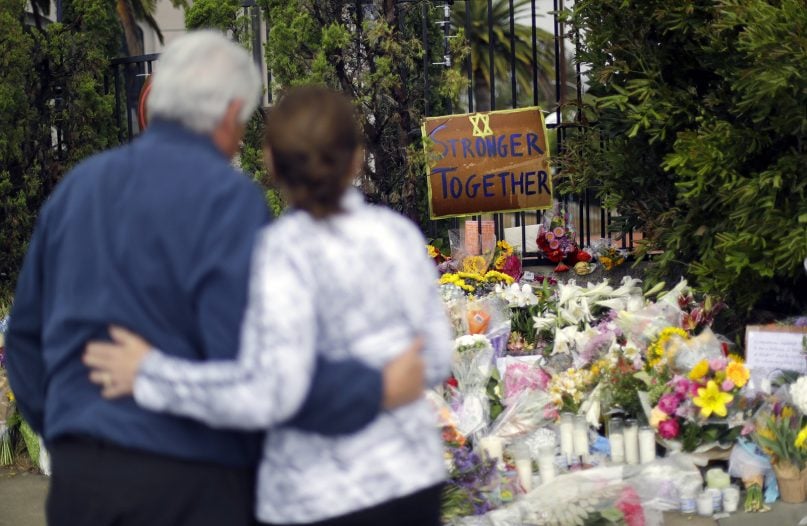 A couple visits the growing memorial across the street from the Chabad of Poway synagogue in Poway, Calif., on April 29, 2019. (AP Photo/Greg Bull)

Such calls are seemingly a manifestation of a broader culture of puristic outrage, whereby the very presence of views, opinions, and images we find—often with solid basis—offensive or wrongheaded results not in engagement or dialogue, but in attempts to purge, silence, and eliminate the offenders. It is a cultural phenomenon on the left and right, on college campuses and social media platforms. It is part of our twenty-first-century culture wars.

Which made an op-ed that appeared in the Times on Monday all the more remarkable. The article was by Rabbi Yisroel Goldstein, the leader of the synagogue attacked by a white nationalist with an assault rifle on Saturday. The gunman was apprehended and charged with the murder of one worshipper, Lori Kaye, and the attempted murder of three more, including a child whose family had moved to California to escape the trauma of Hamas rocket attacks. Goldstein himself lost a finger in the assault.

“I pray that my missing finger serves as a constant reminder to me,” Goldstein wrote. “A reminder that every single human being is created in the image of God; a reminder that I am part of a people that has survived the worst destruction and will always endure; a reminder that my ancestors gave their lives so that I can live in freedom in America; and a reminder, most of all, to never, ever, not ever be afraid to be Jewish.”

Goldstein’s choice to publish his essay in the Times, at the very same moment when many of his coreligionists were talking about canceling their subscriptions, only heightened the irony: If they had stopped subscribing, they would not have been able to read his article (much less link to it, admiringly, on social media). Which prompts me to wonder how much Goldstein, or those who helped him place the article, considered the venue.

Perhaps he didn’t, in which case the publication of Goldstein’s piece in the Times is simply a testament to the unique place the paper holds in American, and American Jewish, life. But I prefer to believe he did and to read his decision as an enactment of the kind of engagement that is ultimately essential if healing, understanding, and reconciliation are to come about.

“I am a proud emissary of Chabad-Lubavitch, a movement of Hasidic Judaism,” Goldstein wrote. “Our leader, the great Rabbi Menachem Mendel Schneerson, famously taught that a little light expels a lot of darkness.”

We could all use more light. And ultimately, we, as individuals and collectives, must be its source—in our words, our actions, and our media.

(Joshua Feigelson, is dean of students at the University of Chicago Divinity School. This essay originally appeared in Sightings, a publication of the Divinity School's Martin Marty Center for the Public Understanding of Religion. The views expressed in this commentary do not necessarily represent those of Religion News Service.)