JERUSALEM (RNS) — Like many religiously observant Israelis, Julio Mendez and his wife, Milagros, were frantically preparing for the Sabbath as sundown approached on a Friday in late March. As leaders of their religious community for the past 15 years, Milagros was in charge of Friday night dinner, coordinating a 20-person potluck featuring an assortment of salads, vegetarian lasagna, zucchini soup and home-baked desserts.

Speeding down Ma’ale HaShalom street at 4 p.m. in his white 2012 Toyota Corolla, Julio, 62, was paying a final visit to an ill friend before sundown.

The Mendezes are Sabbath observers, but they are not Jewish. They belong to a small Christian minority in Israel of Seventh-day Adventists, who number just 900 in the entire country — a tiny fraction even of Israel’s Christian population. Julio Mendez is the senior pastor of Jerusalem’s only Adventist church, on Abraham Lincoln Street in Jerusalem.

While in other countries the world’s 21 million Adventists stand out beyond their numbers for their Saturday services and their public evangelism, here in Israel the group can be easy to miss. Being an Adventist, for one thing, doesn’t preclude a believer from belonging to another faith.

In Haifa, Sergey Gregoriev is the Adventists’ senior pastor of northern Israel. Gregoriev also considers himself Jewish. “For me, being a Seventh-day Adventist is in harmony with my Jewish roots,” said Gregoriev, who arrived in Israel as part of the million-strong wave of Russian-speaking immigrants in the late 1980s and 1990s.

Given the fluidity with other faiths, Adventist churches often reflect their converts’ native religions. The Jerusalem congregation, for instance, seems particularly Jewish.

“We do not encourage our community members to drive on the Sabbath, or engage in business matters,” said Mendez as he pulled up outside the church on Abraham Lincoln Street. On a wall was a gold plaque that read in Hebrew: “The international congregation of Sabbath-keeping Seventh-day Adventists in Jerusalem. Everyone is welcome.” 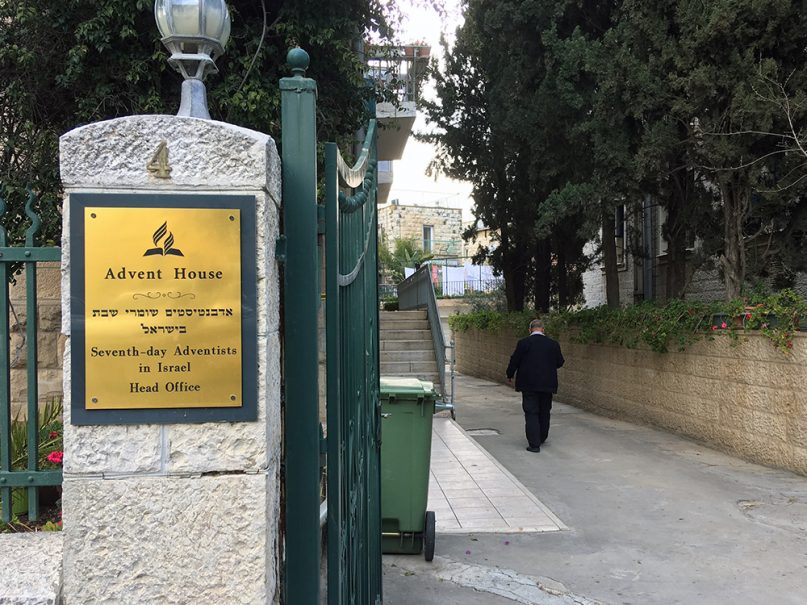 The entrance to the Seventh-day Adventist Church on Abraham Lincoln Street in Jerusalem. RNS photo by Jonathan Harounoff

Inside, a Torah ark, covered by a blue velvet curtain emblazoned with two gilded menorahs, stood in the center of the room. The room looked like a standard synagogue, but in a telling sign that it wasn’t, a Hebrew copy of the New Testament rested on a rosewood stand in front of the Torah ark, left open to a passage from the Gospel of Mark about Jesus entering Jerusalem.

The Torah ark, Mendez said, was brought to the church by Morocco-born Richard Elofer, himself a Jew, who became the president of the Adventist community after marrying an Adventist woman.

“If the Kotel is full and someone wants to celebrate their bar mitzvah with a Sefer Torah, they can come here free of charge,” Mendez said.

Two hours’ drive away in Nazareth, Wisam Ali, the chief Adventist pastor for the country’s Arabic-speaking community, was born into an influential Muslim family where his father was the head of his local tribe and his uncle the imam.

“My decision was the ultimate shame to my family. They even called a council to discuss the matter,” said Ali.

He is now working on building the country’s first Arabic-speaking Adventist church in Israel.

The Seventh-day Adventists originated in 19th-century upstate New York as an offshoot of the Millerites, who believed Christ’s second coming would occur in 1844. When it failed to materialize, a fact known as the Great Disappointment, the Adventist movement’s leaders claimed that Jesus had instead entered a heavenly sanctuary on the expected date and that his return to earth would be nonetheless imminent. Since then, the Adventist movement has continued to grow, with some 86,000 churches worldwide.

They believe the Bible to be infallible — their Saturday Sabbath reflects the Book of Genesis’ account that God rested on the seventh day.

“We have 28 fundamental beliefs in the Adventist Church, all found in the Old and New Testament,” said Mendez. Core to the faith is tending to the body as God’s divine creation, which is why many Adventists follow healthy, plant-based diets, abstaining from alcohol, caffeine and smoking. Studies such as the Blue Zones projects have shown that Adventists live on average a decade longer than non-Adventists.

Engaging in same-sex relations is heavily discouraged. “We do not condemn homosexuals, but we always encourage them not to engage in homosexual acts,” Mendez said. “It is not the original plan, and we help our young members who have those tendencies through rehabilitation programs and counseling sessions.”

But the Adventist community in Israel remains relatively unknown to the public and has attracted little media attention, something the Mendezes are hoping to change. They have recently struck up strategic partnerships with local tour guides in Jerusalem in a bid to raise awareness of the city’s Adventist community.

One guide, a regular visitor to the church, attracts large groups of Jewish travelers who have never heard of the Adventist community.

“Most people are shocked when they see us,” Julio Mendez said, “but I also say that if you believe in Jesus, you would also keep the Sabbath because Jesus and his disciples were all Sabbath keepers.”

“Many Israelis seem confused that we keep Shabbat,” said Milagros Mendez, as her husband nodded. “They assume that all Christians are Sunday keepers, but, for me, this is a chance to teach people that there are Christian Shabbat keepers, too.”

But sharing a Sabbath is a long way from sharing a faith, according to Joel Collick, a British-born Jewish Jerusalem resident. “Even though Adventists incorporate the Sabbath into their faith, I don’t know how well received they would be among Jewish communities in Israel because the fundamental theological differences are what would stand out more.”