WASHINGTON (RNS) — Standing before a National Day of Prayer gathering, the Rev. Anthony Thompson called himself an example of the day’s theme of loving one another — no matter what.

“Can you love someone who hates you because of the color of your skin?” he asked the crowd of more than 200 assembled Thursday (May 2) at the U.S. Capitol’s Statuary Hall and others watching via TV and social media. “Can you love someone because they hate you for being gay or being different?”

Thompson’s late wife, Myra, was one of the “Emanuel 9,” members of Mother Emanuel African Methodist Episcopal Church in Charleston, S.C., who were killed during a Bible study by white supremacist Dylann Roof in 2015. 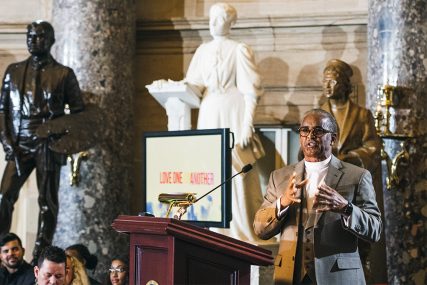 The Rev. Anthony Thompson speaks at a National Day of Prayer event at the Capitol on May 2, 2019. Photo by Bud Sullins

“God asked me, ‘Anthony, can you love Dylann?’” Thompson said. “Forty-eight hours after that tragedy, I was at Dylann Roof’s bond hearing and I had to answer God’s question.”

Thompson said he was able to tell Roof he forgave him and urged the killer to repent.

“For the first time I knew and understood exactly what it meant and felt like to experience the peace of God, which passes all understanding.”

Thompson was one of a series of speakers who expounded on the 2019 National Day of Prayer theme of  “Love One Another.”

Ronnie Floyd, the outgoing president of the National Day of Prayer Task Force, served as master of ceremonies of the Capitol Hill event. He called on people to, at turns, get on their knees on the marble floor of the hall or stand together in huddles for prayer. 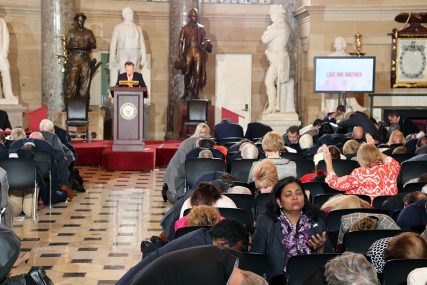 Ronnie Floyd leads attendees in prayer during a National Day of Prayer event at the Capitol on May 2, 2019, in Washington. RNS photo by Adelle M. Banks

“Tonight we will cry out to God together from this unique place, that God will give America a ‘Love One Another Movement’ that will change the course of this nation,” said Floyd.

“There is nothing more powerful than the words of Jesus Christ: Love one another. These words set a biblical standard that is high and holds each of us to immediate accountability in all of our relationships.”

Floyd pointed to Thompson as an example to motivate others to “never let anyone outside of your circle of love” and strive to bridge divides in church and society.

“If Rev. Thompson can forgive a man who took the life of his wife, who are you to hold any unforgiveness in your heart?” he asked.

Prayers about acceptance, forgiveness and for the branches of government and the persecuted church were interspersed with music by the Brooklyn Tabernacle Choir. Andrew Brunson and his wife, Norine, address a National Day of Prayer event at the Capitol on May 2, 2019, in Washington. RNS photo by Adelle M. Banks

Floyd asked those who gathered in Statuary Hall to stand if they had prayed for Pastor Andrew Brunson, an American evangelical held in Turkey for two years before he was released in October. Most of the people assembled among the dozens of statues stood.

Brunson told the crowd he was thankful for their prayers. Appearing with his wife, Norine, the pastor recounted how he was concerned people might stop petitioning God on his behalf.

After he spoke, Norine Brunson asked people to stand for a moment of silence to remember persecuted Christians. Tony Perkins, a commissioner of the U.S. Commission on International Religious Freedom, then led a prayer asking that God would “give us requests we want, like Andrew being returned home.”

The observance on Capitol Hill followed a ceremony earlier in the day when President Trump hosted an event at which Protestant, Catholic, Jewish, Muslim, Mormon and Hindu speakers took turns reciting prayers. The day of prayer has been observed annually across the country since Congress created it in 1952.

Floyd said in an interview after the Capitol Hill observance that it will be up to individuals and their congregations to determine how to live out what he called the “Love One Another Movement.”

“We really wanted the people to create the movement in their own town, in their own city, in their own way, through their own church rather than us trying to dictate something,” said Floyd, the incoming president of the Southern Baptist Convention’s Executive Committee. “If we really want a movement to happen, it has to happen at the grassroots level.” 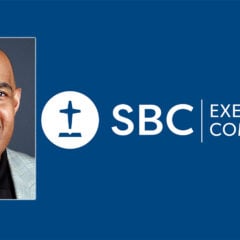