Those have to do with whether Cohen’s intervention led Falwell to issue a crucial evangelical endorsement of Trump ahead of the 2016 Republican presidential primaries.

Falwell, who has denied Cohen’s account, is an ardent champion of the president. Just this week Falwell tweeted that Trump was owed an extension of his term as “reparations” for the time spent on the Mueller investigation.

But while some evangelicals faulted Falwell for his endorsement of a president whose behavior has been at odds with many evangelical values, the allegations of racy personal photos call into question Falwell’s own behavior and whether they align with evangelical sexual mores. 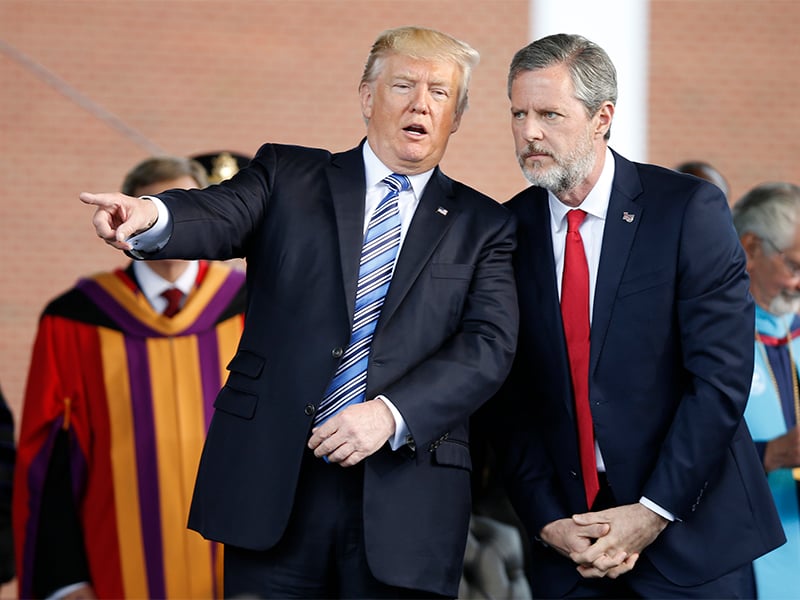 Christian colleges take sexual impropriety seriously. Many schools, including Liberty University, have strict codes regarding sexual misconduct, including the viewing and sharing of pornography and nude or indecent photos.

“I would think that should a president wind up exposed with having engaged in sexually inappropriate behavior, that would reflect back on the character of the institution, and I would expect the trustees would take that more seriously,” said John Hawthorne, a sociologist of religion at Spring Arbor University, a Christian school in Spring Arbor, Mich.

Many similar schools, such as Liberty University, have honor codes that spell out what they consider to be Christian standards for sexual conduct.

Falwell has denied Cohen’s account, made in a phone call in March with actor Tom Arnold. According to a recording of the call, Cohen claimed he flew to Florida around 2015, and got the person with the Falwell photos to agree to destroy them.

Neither Falwell nor Liberty University responded to a request for comment from RNS.

Reuters first reported the story on Tuesday (May 7), quoting Cohen as saying, “I actually have one of the photos. It’s terrible.” 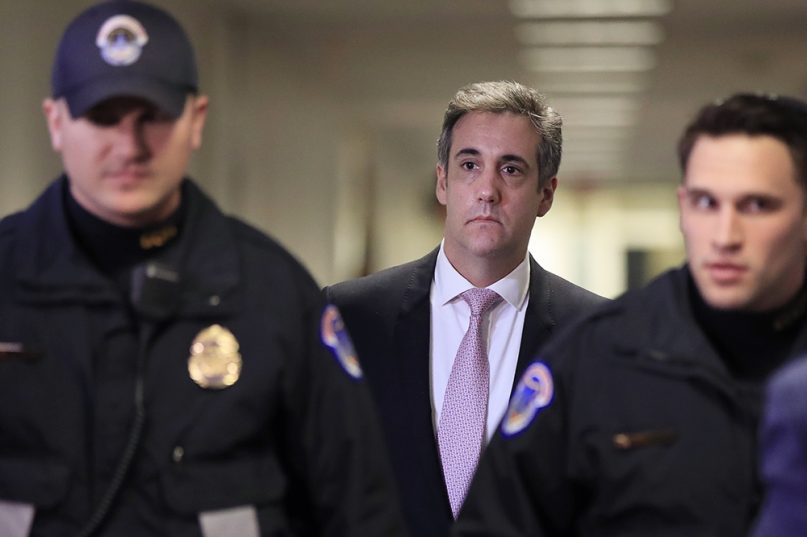 Later that day, Falwell’s lawyer told The Washington Post that the allegation was false.

“While the Falwells have a long-standing friendship with Michael Cohen, they never engaged or paid Cohen to represent them in any legal or other professional capacity, and Cohen did not ever resolve any legal matter on their behalf,” Falwell’s lawyer told the Post.

Falwell then agreed to an interview on the Todd Starnes Radio Show, where he denied the allegations.

“This report is not accurate,” he told Starnes, a conservative talk-show host. “There are no compromising or embarrassing photos of me.”

If there were, it might be a violation of the school’s honor code.

Wheaton College, a premier Christian school in Illinois, has a sexual behavior policy that requires students to refrain from “physical expressions of, written descriptions about, and/or visual images suggesting sexual intimacy.”

Depending on the severity of the offense, disciplinary measures for offenders can range from counseling to probation to expulsion.

Rev. Jerry Falwell Jr., right, answers a student’s question, along with his wife, Becki, during a town hall on the opioid crisis at a convocation at Liberty University in Lynchburg, Va., on Nov. 28, 2018. (AP Photo/Steve Helber)

They take seriously Jesus’ admonition in the Gospel of Matthew that “anyone who looks at a woman lustfully has already committed adultery with her in his heart.”

They also cite a passage from the Apostle Paul’s letter to the Corinthians: “Do you not know that your bodies are temples of the Holy Spirit, who is in you, whom you have received from God?”

“I tell my students who are going to become teachers, if you’ve got something on your social media site and it’s not a flattering thing, take it off,” said John Fea, a professor of American history at Messiah College in Mechanicsburg, Pennsylvania. “It’s not going to be worth it to lose a job over it.”

The larger problem, Fea said, is the viewing of pornography, which he described as “the big hidden secret,” at Christian colleges and universities.

Some evangelical schools now have support groups for young men who are trying to hold each other accountable for viewing pornography, Hawthorne added.

But when do, evangelicals feel more guilt, shame and depression than other Americans, writes Perry in “Addicted to Lust: Pornography in the Lives of Conservative Protestants.”

While no one has accused Falwell of viewing pornography or straying outside his marriage to Becki, his wife, his alleged use of photos may be a sign that the culture of nude selfies may have reached Christian institutions — as has the widespread viewing of pornography.

“It’s a serious problem these colleges are trying to address,” Fea said. “They can’t do much to control it.”