CHICAGO (RNS) — During a standing-room-only speech at a Roman Catholic church in Chicago this week, Minister Louis Farrakhan attempted to defend himself against charges he promotes violence and hate.

But then, in a speech livestreamed on the church website and on Facebook, he turned to a familiar refrain: anti-Semitism.

“I just know the truth,” Farrakhan said at St. Sabina Roman Catholic Church. “And I’m here to separate the good Jews from the satanic Jews.”

Jonathan Greenblatt, CEO of the Anti-Defamation League, called Farrakhan’s remarks “vintage Farrakhan” and wondered why Chicago Catholics would invite him to speak.

“These are the hateful notions that have poisoned the Nation of Islam’s worldview for decades, and it is deeply disappointing that he was given a platform in a church to spew his hateful vitriol,” Greenblatt said.

The Rev. Michael Pfleger, an activist and showman known for opposing gun violence and racial injustice, declared he invited Farrakhan because “I have been and always will be a defender of free speech.”

Earlier in the day in Rome, Pope Francis addressed a conference of scholars assembled at the Pontifical Biblical Institute and spoke of an “ever more profound and fraternal dialogue” between Catholics and Jews. The Rev. Michael Pfleger, left, sits next to Minister Louis Farrakhan, of the Nation of Islam, before they both speak at St. Sabina Church on May 9, 2019, in Chicago. (Ashlee Rezin/Chicago Sun-Times via AP)

Eric Meyers, professor emeritus of Judaic studies at Duke University who spoke at the conference, called it “a historic milestone in Catholic-Jewish relations.”

He believes the conference might one day eclipse “Nostra Aetate,” the landmark 1965 Vatican declaration that established a new rapport between Jews and Catholics.

The juxtaposition is a stark reminder that while Catholic, Protestant and Jewish scholarly and institutional structures have grown increasingly collaborative and warm, anti-Semitism remains a strong undertow.

Pfleger, the 69-year-old priest of a predominantly African American church, told Religion News Service he invited Farrakhan after Facebook banned him, along with inflammatory right-wing figures Alex Jones and Milo Yiannopoulos, from its site.

The Illinois Holocaust Museum and Education Center in suburban Skokie protested the talk.

Cardinal Blase Cupich, head of the Archdiocese of Chicago, said in a statement released Tuesday evening he was not consulted before the speech. Cupich urged Pfleger to accept an invitation by the Illinois Holocaust Museum to meet with its leaders and Holocaust survivors and pledged to continue the archdiocese’s work with religious leaders in Chicago to promote tolerance, respect and nonviolence.

“Antisemitic rhetoric — discriminatory invective of any kind — has no place in American public life, let alone in a Catholic church,” he said.

“I apologize to my Jewish brothers and sisters, whose friendship I treasure, from whom I learn so much, and whose covenant with God remains eternal.”

Ironically, Farrakhan’s speech received far more publicity than the May 7-9 conference in Rome dedicated to a reappraisal of Jesus and the Pharisees.

Some of the speakers featured at “Jesus and the Pharisees: An Interdisciplinary Reappraisal” held May 7-9 in Rome. Screenshot

At the conference, held on the occasion of the Pontifical Biblical Institute’s 110th anniversary, scholars challenged negative stereotypes that have built up over the centuries about the Pharisees.

That religious party, which flourished around the time of Jesus, laid down some important precepts of what would later emerge as modern Judaism.

The Pharisees emphasized strict adherence to the Torah’s purity laws, and that put them in direct conflict with Jesus as recorded in the New Testament.

But today the label “Pharisee” refers to someone who is self-righteous or a hypocrite and can have anti-Semitic overtones.

“In our world, sadly, such negative stereotypes have become quite common,” the pope said. “One of the most ancient and most damaging stereotypes is that of a ‘Pharisee,’ especially when used to cast Jews in a negative light.” 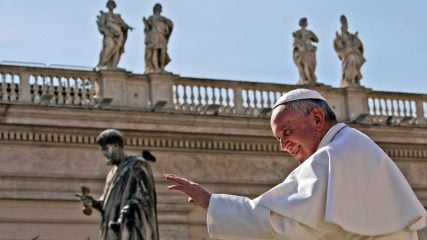 Pope Francis leaves at the end of his weekly general audience in St. Peter’s Square at the Vatican on March 6, 2019. (AP Photo/Alessandra Tarantino)

Francis has himself fallen into that trap, as John Allen of Crux has noted, frequently referring to Pharisees as “legalistic” and “rigid” and “starched.”

The word was used last month by Democratic presidential candidate Mayor Pete Buttigieg, who accused Vice President Mike Pence of being a “Pharisee” when it comes to same-sex marriage.

“One speaker after the other, we all said it’s time to change,” said Meyers. “It’s a significant moment in relations between Jews and Catholics.”

Yet across the ocean, in Chicago, a Catholic priest  introduced Farrakhan as “my brother and my friend.”

Pfleger wondered aloud if Facebook hadn’t banned Farrakhan to keep people from hearing his entire message. The Nation of Islam leader is a voice against injustice against black people in the United States and needs to be heard, Pfleger said.

Pfleger confirmed to RNS he had invited George to dinner at Farrakhan’s house and attended the meal. The Archdiocese of Chicago did not comment on whether either cardinal had met with Farrakhan.

Pfleger appeared to defend Farrakhan, saying he called out the Catholic Church for its sexual abuse crisis, too.

“I think he tried to point out there’s good and evil in every religion and every faith,” the priest said.

In a statement, the Illinois Holocaust Museum said Farrakhan’s reference to “satanic Jews” come as no surprise.

“We will continue to speak out against these remarks and encourage our community to use their voices and choices to bring people together and build them up,” the statement read, “not bring them down.”

(This article has been updated.)