(RNS) — A rash of attacks on churches in Burkina Faso is exposing the growing challenge of containing Islamist violence across Africa’s Sahel region.

On Sunday (May 12) militants attacked a Roman Catholic Church service in Dablo, a town about 200 kilometers north of Burkina Faso’s capital, Ouagadougou, killing a 34-year-old Catholic priest and at least five worshippers. The priest, Rev. Simeon Yampa, died as he celebrated morning Mass.

An estimated 20 to 30 attackers fired on the fleeing congregation and then returned to set the church ablaze. They also burned down nearby shops and looted a local health center.

Archbishop Theophile Nare of the diocese of Kaya expressed pain at the deaths and appealed for peace, while paying tribute to the dead priest.

“Humble man obedient and full of love, he loved his parishioners who he served,” said Nare in a news release.

Two weeks earlier, the militants targeted a Protestant church in the town of Salgadiji, killing at least six people.

According to news reports, the militants had asked the Assemblies of God pastor and five others to convert to Islam before killing them. Earlier, four people had been killed in another attack in the same area.

“Some Christians who have lost their lives did not have the opportunity to be asked to convert,” said Rev. Leonard Tegwende Kinda, general secretary of the Association of Reformed Evangelical Churches in Burkina Faso.

“They have been checking the people’s necks and pockets for Christian crosses,” added Kinda. 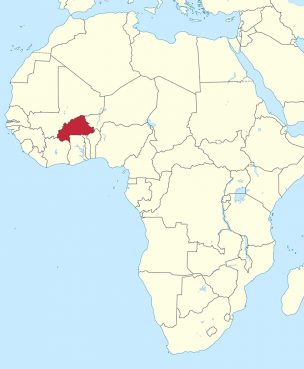 Muslims, who make up more than 61 percent of the 20 million residents of Burkina Faso, have coexisted peacefully for years with the country’s Christians, mainly Catholics, who represent about 30 percent of the population. The Islamists seem to be attempting to destabilize the country by fomenting division.

Kinda said the best defense against the violence is to provide humanitarian aid to the 120,000 who have been displaced by the Islamist groups and to strengthen the social fabric.

“It is definitely helpful to strengthen social justice projects and especially initiate a new generation of interreligious activities at ground level and involve local leaders,” he said. “We need to advocate for good governance and community-handled development plans.”

Since 2016, at least 300 violent incidents have been reported in Burkina Faso, resulting in the death of more than 360 people, including policemen and soldiers, school teachers and religious leaders.

Ansar Ul Islam, a militant group affiliated with al-Qaeda in the Islamic Maghreb, is believed to be behind the attacks. Based in Algeria, the group has escaped on motorcycles into neighboring Mali after carrying out its attacks, according to church sources. Operating in Burkina Faso under the name Ansar Dine, Ansar Ul Islam has also kidnapped foreigners for ransom.

The Sahel, a region that separates the Sahara Desert in the north and the Savannah in the south, takes in all or part of Mali, Niger, Mauritania and Burkina Faso. All are battling Islamist insurgencies.

In Burkina Faso alone, the attacks have risen from 24 in 2017 to 136 in 2018, according to the security think tank African Centre for Strategic Studies.

According to Miguel Moratinos, the High Representative for the United Nations Alliance of Civilizations, the attacks are a hate crime targeting the faith communities in the country. UNAOC is a UN entity mandated to serve as a soft political tool for conflict prevention and conflict resolution.

“We need to act against all forms of extremism — whether it targets churches, mosques, synagogues or any other place of worship,” said Moratinos.