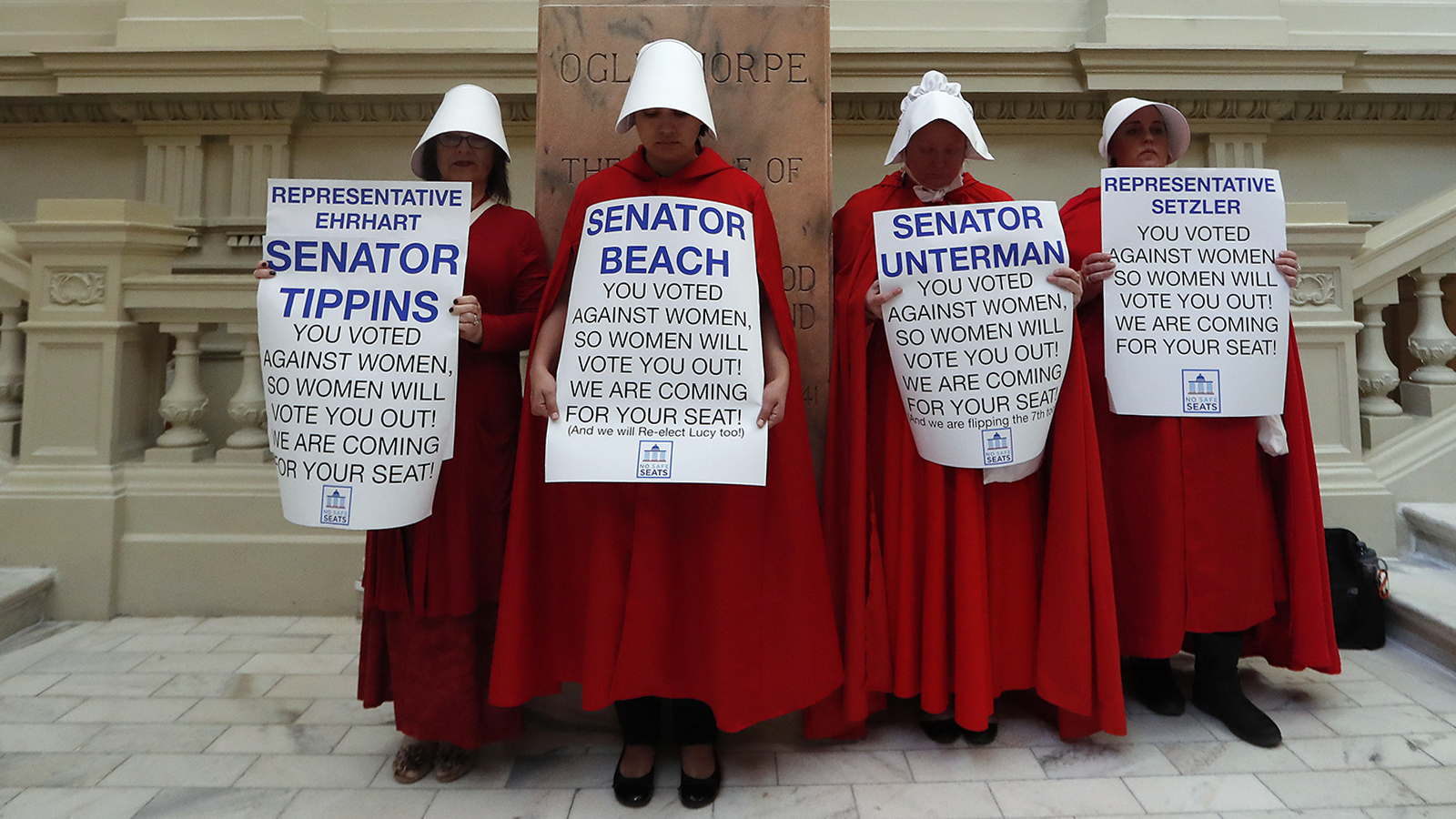 Female demonstrators, dressed as characters from "The Handmaid's Tale," hold signs to protest HB 481 at the state Capitol in Atlanta, Ga., on April 2, 2019. HB 481, which bans most abortions after a fetal heart beat is detected, passed both the House and the Senate and was signed into law by Gov. Brian Kemp. (AP Photo/John Bazemore)
May 17, 2019
Kira Austin-Young

(RNS) — Several states have passed restrictive abortion bills this legislative session, with Alabama earlier this week joining Georgia, Mississippi, Kentucky and Ohio in passing so-called “fetal heartbeat bills” into law, which make abortion illegal after a heartbeat can be detected, as early as six weeks into a pregnancy.

The argument behind these bills alleges that a heartbeat is a sign of life. But the law that Alabama Gov. Kay Ivey signed on Wednesday (May 15) goes even further, instituting a near-ban on abortion except in cases where the child's or the mother’s life is at risk and with no exceptions for rape or incest.

With a conservative majority on the Supreme Court, progressives fear that one of these bills may sound the death knell for Roe v. Wade, the 1973 ruling that found the Constitution provides a fundamental “right to privacy” that protects a woman’s decision whether or not to have an abortion.

The restrictiveness of these new laws and their sheer number show a new-found boldness from anti-abortion fighters in the conservative states. Gone are the days of seeking merely to regulate hallway size or require abortion doctors have hospital admitting privileges; these laws fire a direct shot at Roe and issue an invitation for the U.S. Supreme Court and its new conservative majority to revisit the matter. 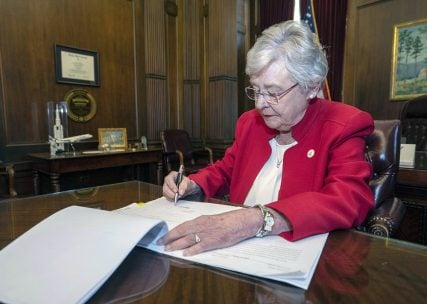 Alabama Gov. Kay Ivey signs a bill that virtually outlaws abortion in the state on May 15, 2019, in Montgomery, Ala. Republicans who support the measure hope challenges to the law will be used by conservative justices on the U.S. Supreme Court to overturn the Roe v. Wade decision that legalized abortion nationwide. (Hal Yeager/Alabama Governor's Office via AP)

Despite the action in these states, a majority of Americans support Roe v. Wade or at least do not want to see it overturned. A July 2018 poll conducted by NBC News and The Wall Street Journal found that only 23% believe the ruling should be reversed. Even with the battle over abortion rights raging, abortions themselves are at an all-time low since Roe, based on the most recent numbers. A historically low teen pregnancy rate and efforts to increase access to contraception might factor in, as might state restrictions like clinic regulations, waiting periods and required ultrasounds.

Even for public figures who have been outspoken against abortion, the Alabama law is a bridge too far. On his television show “The 700 Club,” televangelist and Baptist minister Pat Robertson decried the ban as extreme due to the lack of exceptions and the punishment for performing abortions of up to 99 years in jail. While critical of Roe and emphasizing the need for strict abortion laws, he also stated that this law was unlikely to accomplish the reversal of Roe as intended.

Ironically the passage of these laws could lead to a kind of cooperation between the traditional pro-choice and pro-life factions. The conviction that we need abortion at least in some cases, such as rape and incest, crosses political and religious lines, despite the values we hold about when life begins.

In the years before Roe v. Wade, the Clergy Consultation Service, an underground network of ministers and rabbis, helped women in need locate and access safe abortion services. As pastors and confidants, they knew all too well the dangers of unsafe abortions and how illegitimate abortion providers would take advantage of poorer and less sophisticated women.

Whether or not they supported the actual act of abortion, then, those clergy knew that those in desperate circumstances would inevitably seek it out and that everyone would be better off if they were provided with safe, professional services.

This kind of concerted effort could rise up again as these laws target those already on the margins living in states with high maternal mortality rates and low education rankings.

But we hardly need to wait to see if the laws will go into effect to see that the unintended consequences of these new laws as written could be vast and frightening. Already women in some states are being prosecuted for miscarriages, and under these laws, women in need of medical care might be hesitant to seek it. The impact of these laws on in vitro fertilization (IVF) procedures is also unknown.

As an Episcopal priest, I affirm the resolution passed in 1994 by the General Convention of the Episcopal Church that states: “All human life is sacred from its inception until death.”

But I also agree when it says, “We believe that legislation concerning abortions will not address the root of the problem. We therefore express our deep conviction that any proposed legislation on the part of national or state governments regarding abortions must take special care to see that the individual conscience is respected, and that the responsibility of individuals to reach informed decisions in this matter is acknowledged and honored as the position of this Church.”

I believe there are better avenues for discouraging abortion than legislation that restricts or outlaws access to the full spectrum of reproductive healthcare. Attention to maternal mortality rates that disproportionately affect African-American women, instituting complete and accurate sex education in schools, and paid family leave are a few ways that politicians might seek to serve families and encourage childbirth, if they truly believe that life is sacred.

It’s a brand-new day when a liberal, female Episcopal priest is in agreement with Pat Robertson, but perhaps this legislation can draw opposition from Christians across the spectrum.

(Kira Austin-Young is the author of “Pro-Choice and Christian” and the interim rector of St. Ann’s Episcopal Church in Nashville, Tenn. The views expressed in this commentary do not necessarily reflect those of Religion News Service.)