UPLAND, Ind. (RNS) — When Vice President Mike Pence took his place on stage at Taylor University’s commencement ceremony over the weekend, standing next to university President Lowell Haines, the divisions Pence’s appearance had caused among the student body were immediately evident. Thousands in the audience, including a group of students wearing shirts that read “I Like Mike,” rose in a standing ovation for Pence and Haines, who had invited the vice president.

Dozens of other students and faculty at the Christian liberal arts school — one observer counted as many as 60 — had already walked out of the university’s Kesler Center by previous agreement during the singing of a hymn preceding the vice president’s speech. Among those who stayed, many expressed their dissent by staying seated in silence.

But for a number of Taylor graduates, the protest was as much about unity as it was political division. While some said they walked out over Pence’s views on LGBTQ issues or the Trump administration’s immigration policies, others said they had walked out in support of their friends, whether or not they shared the objections to Pence’s presence.

Senior Abigail Crosley, too, appeared to be caught between her classmates’ conflicting feelings.

“I can’t become complicit in disrespecting people that I love,” Crosley said. “I have dear, dear friends who do support and condone Vice President Pence and that doesn’t mean that they aren’t loving the Taylor community well … but for me, just based on my understanding of the Taylor community and the way I’ve come to understand my responsibility and role in that, I knew that I couldn’t stay and claim to love my neighbor well.”

Even the protest had been worked out in calm discussions with Taylor’s provost, Michael Hammond, and Skip Trudeau, vice president for student development. In a meeting with a group of students, it was decided that attendees would be allowed to walk out during the hymn “Be Thou My Vision,” before the speech.

If anything, Taylor’s 2,000-strong student body appeared to be united by discussions over their differences, even as they disagreed whether Pence represents Taylor’s Christian values. 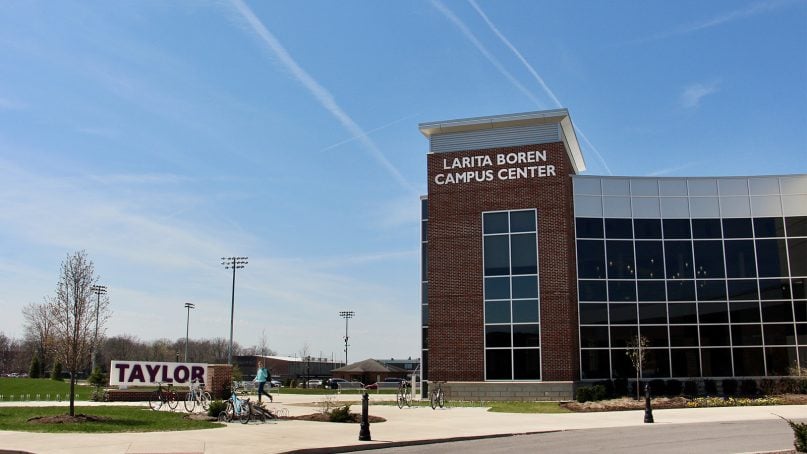 The April 11 announcement that Pence, a former governor of Indiana and an outspoken evangelical Christian, had been chosen as this year’s graduation speaker produced strong reactions, not least on Twitter and other social media. But on campus, students met in chapel, forums and small groups to talk about their responses. While some of those conversations were tense, seniors said they found them constructive and helpful in understanding each person’s perspective.

“I appreciate whenever there’s an expression of discord because it proves that we’re not all the same and that we all don’t believe the same thing,” senior Abigail Roberts said. “It gives the opportunity for people to share who they are and what they stand for.”

In his speech, Pence praised the accomplishments of the graduating seniors and recalled his own college days at Hanover College, a Presbyterian school in southern Indiana, when a senior friend told him he had to wear the cross on his heart before he could wear it around his neck.

But Meharg also said he was disappointed Pence chose to speak on political matters. Pence told students they were graduating at the perfect time because of the strong economy. He mentioned the administration’s stance on abortion and Christian faith.

As he did at Liberty University the previous weekend, Pence told Taylor’s graduates that they will face opposition to their faith.

“You know, throughout most of American history, it’s been pretty easy to call yourself a Christian — but things are different now,” he said. “Lately, it’s become acceptable, even fashionable, to malign traditional Christian beliefs.”

“Speaking of friends of mine, allow me to bring greetings from a friend I talked to on my way over to Taylor,” Pence said. “So, allow me to extend the congratulations to the graduating class of 2019 from the 45th president of the United States of America, President Donald Trump.”

Meanwhile, the group that exited the Kesler Center walked around the building to the school’s gymnasium, the Odle Arena, to pray for Taylor as Pence’s voice played loudly from the gym speakers.

“Then we all gathered in a big circle and started praying (and) yelling over his speech,” van Gilse said, until the public address system was turned off.

As the graduation exercises concluded, the group walked back in and the audience and graduates alike sang the “Doxology.”

“Being able to stand with the senior class and sing the Doxology was definitely a much-needed reminder of the unity that our class has in Christ,” Crosley said. “And the way that we can focus on him despite our differing politics.”

Some graduating students said they want the Taylor administration to be more transparent when deciding on a graduation speaker in the future, but there was a widespread sentiment that the Pence selection had benefited the Taylor community overall.

“I would say I move forward with great hope for Taylor,” van Gilse said. “In a way, I think this Pence situation has been helpful to Taylor in that it caused us to rethink how decisions are made.”

Senior Madeleine Burkholder said: “We heard President Haines in chapel talk about how normally it’s just the president that makes this decision and in the future, he’s hoping to get more of a panel to make the decision. Which I think could be a really good idea.”

The takeaways were not all positive. “As I was walking out, I was belting the verse ‘Riches I heed not, nor man’s empty praise, thou mine inheritance, now and always, thou and thou only first in my heart, high king of heaven, my treasure thou art,’” Crosley said.