(RNS) — Jex Blackmore is a Satanist, as she plainly admits to the camera in Director Penny Lane’s documentary “Hail Satan?,” a portrait of the 30-something Blackmore that opened earlier this year.

But she’s not a Satan worshipper. A self-proclaimed “Satanic feminist,” she was until recently a national spokesperson for the non-theistic, religious-cum-political-activist group called The Satanic Temple. She defines a Satanist as “an individual who embraces her pariah status and actively challenges arbitrary authority in defense of personal sovereignty.”

The devil, in her understanding, is “a symbol of defiance, independence, wisdom and self-empowerment and serves as an affirmation of natural existence.” Lucien Greaves, left, and director Penny Lane pose for a portrait to promote the film “Hail Satan?” at the Salesforce Music Lodge during the Sundance Film Festival on Saturday, Jan. 26, 2019, in Park City, Utah. (Photo by Taylor Jewell/Invision/AP)

The Satanic Temple is what, on the internet, they call a “troll”: a spoof meant to raise hackles. It uses the rhetoric of religious devil-worship not to actually honor any supernatural being — its members are explicitly secular — but to call attention to potential loopholes in religious freedom laws designed to benefit the Christian right.

RELATED: The Satanic Temple is a real religion, says IRS

Simply put, The Satanic Temple, founded in 2012 by Malcolm Jerry and Lucien Greaves (both are pseudonyms), is an absurdist political performance. In the group’s first high-profile outing in 2013, its members, dressed in flowing black robes, held a rally to show their approval for a recently signed Florida law that would allow schoolchildren to read “inspirational” messages at school functions — a workaround masterminded by Gov. Rick Scott to start the school day with a prayer or Bible verse. “Hail Satan. Hail Rick Scott,” their signs read.

Its most recent triumph was convincing the Internal Revenue Service that it is a bona fide religion.

That satire can sometimes blur the line between art and real menace. Blackmore and The Satanic Temple parted ways not long after “Hail Satan?” appeared, due to a scene in the film in which Blackmore, surrounded by pigs’ heads on spikes and half-naked worshippers, announced, “We are going to disrupt, distort, destroy… We are going to storm press conferences, kidnap an executive, release snakes in the governor’s mansion, execute the president.”

The Satanic Temple insisted her appearance (and incendiary rhetoric) wasn’t formally sanctioned by TST, and it has since severed ties with Blackmore. Blackmore, for her part, criticized the organization’s lack of diversity, charging in a recent interview with Jezebel that “we’ve again seen an organization consolidate power into the hands of a group of men or people who support and act as a mouthpiece for those men.” She went on to point out that Satanism has long been vulnerable to being co-opted by white supremacists.

(Blackmore isn’t alone in this critique: several of TST’s chapter heads have resigned in protest over Greaves’ decision to engage the pro bono services of Marc Randazza, a free speech lawyer who has both defended and publicly supported alt-right clients like Alex Jones.)

These internal debates may seem like inside baseball, but they reflect a much bigger question. As more and more millennials identify with spiritual or philosophical movements outside the bounds of “traditional” religions, how will those new groups represent all their members? If the value of these groups is in their diversity and inclusivity, how do they police their ideology while remaining accepting of those who come specifically to be liberated from traditional church structures? 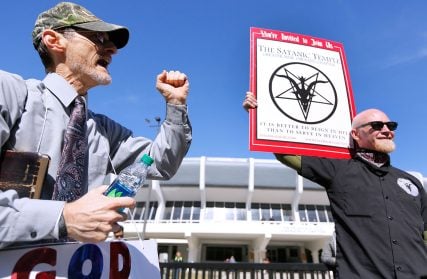 This is especially important for the most progressive new spiritual movements, whose base is among those who have been marginalized by established religions — queer people, for instance, who make up some 36% of the religiously unaffiliated — and millennials opposed to what they see as the hegemony of the Christian Right.

Not all of these groups’ rhetoric is as incendiary as The Satanic Temple’s. But in the Trump era, it’s sometimes difficult to divine whether movements like #resistance witchcraft or “witch feminism” are political or spiritual — both have seen mass witch-led hexes to curse, among others, President Trump and Associate Justice Brett Kavanaugh. The political leanings of Astrology Twitter were made plain when New York Rep. Alexandria Ocasio-Cortez, a darling of the progressive left, released her birth chart, to their delight.

As spirituality becomes more rooted in politics and social justice, the question for many faith groups — right, left, Christian, non-theistic or even Satanic — will be: where does “transgressive” end and “problematic” begin?