MOSCOW (RNS) — Russia’s powerful Orthodox Church suffered a rare setback this week as authorities in Yekaterinburg, the country’s fourth-largest city, backtracked on plans for a new cathedral after thousands of people protested against its construction in a popular park.

Defying a ban on unsanctioned public gatherings, protesters rallied for six consecutive nights between May 13-18, tearing down sections of a metal fence around the planned construction site.

The demonstrations drew about 2,000 people every evening — a significant number for illegal rallies in Russia.

“This is our city,” shouted protesters, as police with nightsticks dragged people from the crowd, according to footage aired by TV Rain, an online opposition channel. “Today the fence — tomorrow (President Vladimir) Putin,” shouted other protesters.

The proposed cathedral would have been an exact replica of St. Catherine’s Cathedral, which was destroyed by the Soviet Union in 1930 as part of the Communist state’s anti-religion drive.

But many locals in Yekaterinburg, a city of 1.4 million people around 900 miles east of Moscow, objected to its construction in the park, saying it would have deprived them of a rare green space. 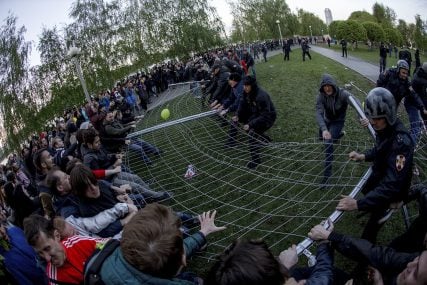 Demonstrators, left, try to pull a fence blocked by police, right, while protesting plans to construct a cathedral in a park in Yekaterinburg, Russia, Tuesday, May 14, 2019. A group that monitors police actions and political repression in Russia says at least 12 people have been detained in Russia’s fourth-largest city while protesting plans to start construction of a cathedral in a city park. (AP Photo/Anton Basanayev) 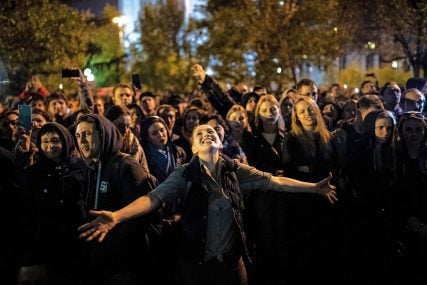 A young woman dances under the rain during a protest against construction of a cathedral in Yekaterinburg, Russia, Thursday, May 16, 2019. Russian police detained several dozen people in the early hours on Thursday at a rally protesting plans to build a cathedral in a popular park in Russia’s fourth-largest city. (AP Photo/Evgeny Feldman)

The original St. Catherine’s Cathedral was located on a different site in Yekaterinburg, where the Bolsheviks murdered Tsar Nicholas II and his family in 1918. A small chapel stands there today.

Athletes from a local mixed martial arts club also launched physical attacks on demonstrators in a bid to break up the protests — a development that sparked widespread public anger.

“When holy matters are imposed on people with fists, then they cease being holy,” said Oleg Kashin, a well-known Russian journalist.

The sports club in question is owned by the Russian Copper Company, which was co-financing the cathedral’s construction alongside the Ural Mining and Metallurgical Company. Both companies have links to the Kremlin and the Russian Orthodox Church.

The fighters denied, however, that they had been acting on anyone’s orders, insisting that they had acted on their own initiative.

Yevgeny Roizman, an outspoken government critic who served as Yekaterinburg’s mayor from 2013 until stepping down last year, was among those opposed to the cathedral.

“We need to fight for every green space and square,” Roizman told fellow protesters.

The Russian Orthodox Church, a key Kremlin ally whose influence has grown massively under Putin, accused the protesters of being “driven by anti-religious” motives.

“To create conflict on religious grounds is especially sad on the soil of Yekaterinburg, where not so long ago by historical standards mass religious persecution took place and Tsar Nicholas II and his young children were murdered,” said Vakhtang Kipshidze, a church spokesman.

Protesters in Yekaterinburg, the birthplace of Boris Yeltsin, the late Russian president, denied they were hostile to religion. The city is widely viewed as one of Russia’s most progressive.

“Nobody is against a church but everyone is against building one here,” one protester told Radio Free Europe. “There are lots of churches here. But not much green space is left in the city.”

At least one student at a local university was expelled after being detained at the protests. The deputy head of the university, Yury Mogilnikov, warned other students that the demonstrations against the cathedral were “senseless.” He also said that participation in the rallies would harm their career chances, according to secretly recorded audio that was posted online.

“Are these people godless?” he said in televised comments on May 16, referring to the protesters. Putin then switched tone, saying: “There need to be steps by both sides to resolve the situation for those who really live there. There’s an easy way to do this — hold a poll.” 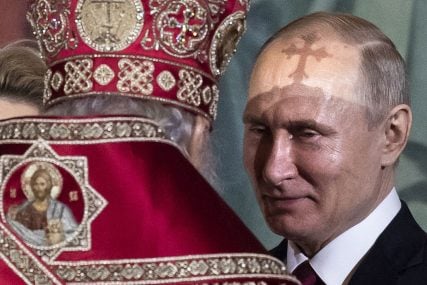 A public opinion survey was organized by VTsIOM, the state pollster.

The results, which were released on Wednesday, showed that 74% of respondents opposed plans to build the cathedral in the park. Only 7% were in favor. Reacting to the poll results, Yevgeny Kuyvashev, the region’s governor, said, “a new location must be found.”

In the aftermath of Putin’s intervention, authorities in Krasnoyarsk, a city in Siberia, also scrapped plans for a new cathedral, citing the need to maintain green spaces.

“This is a blow for both the Russian Orthodox Church and the secular authorities. They tried to put down the protests with force but then got scared. It proves that there is a civil society in Russia that can influence their decisions,” said Alexei Malashenko, an expert on religion at the Moscow office of the Dialogue of Civilizations, an independent think-tank.

The Russian Orthodox Church has not yet commented on the governor’s statement. However, Vsevolod Chaplin, a former spokesman for Patriarch Kirill, alleged that the protests had been orchestrated by Western countries. He did not give details.

Malashenko also noted that the protests in Yekaterinburg were just the latest in a series of demonstrations against Russian Orthodox Church policy. “This is a trend,” he said.

Moscow has experienced a number of similar protests in recent years against the construction of churches in parks and other green spaces, while thousands rallied in St. Petersburg in 2017 against the planned transfer of the city’s landmark St Isaac’s Cathedral to the Russian Orthodox Church.

The Bolsheviks seized the 19th century cathedral after the 1917 Russian revolution and later turned it into a museum.

“The building of religious structures is creating gigantic fault lines in Russian society,” Andrei Kolesnikov, an analyst at the Carnegie Moscow Center think-tank, wrote in an op-ed published by the Moscow Times. “In Russia, the church and state have become virtually inseparable. Whoever is against the church is against the state.”

In Yekaterinburg, workers set about removing a new reinforced fence that was erected after the original one was toppled by protesters.

“I’m very glad that this ended without blood being spilled,” said Roizman, the city’s former mayor, in an online video. “It could all have been very different.”

Opinion
Mikhail Gorbachev’s tragic legacy in the Russian Orthodox Church
Follow us on Facebook!
Submit your photos to RNS