(The Conversation) — Almost immediately after winning a second term in office on May 23, India’s Prime Minister Modi gave a speech making light of parties and individuals who had espoused secularism over the past five years.

During the five years while the Indian government has been led by Modi and the right-wing Bharatiya Janata Party – or BJP – several Muslims were lynched on allegations of eating beef or even just transporting cattle for slaughter. As the number of attacks on Muslims grew, Modi mostly remained silent.

Despite this concession to orthodox Hindu sentiments, India has a constitutional commitment to secularism. Unlike in the West, where secularism calls for a strict separation of church and state, Indian secularism is based on the premise of respect toward all faiths.

However, Modi and the political party he represents are adherents of Hindutva. What exactly is Hindutva and how is it different from the beliefs and practices of Hinduism?

Hindutva is an ideology that states that India is the homeland of the Hindus. According to believers, those who profess other faiths can live in the country only at the sufferance of Hindus.

As a scholar of contemporary Indian politics, I find this proposition to be profoundly disturbing and deeply antithetical to the the central tenets of Hinduism.

The roots of this ideology can, in considerable part, be traced to the growth of Hindu anxieties in colonial India. In 1906, a Muslim political party – the All-India Muslim League – was created. Later, a charismatic politician, Mohammed Ali Jinnah, became its standard-bearer and subsequently the first governor-general of the state of Pakistan following the British partition of India in 1947. Partition led to the division of the former British India into the two independent states of India and Pakistan.

The creation of the All-India Muslim League caused some serious misgivings on the part of some segments of the Hindu population, leading to their political mobilization along religious lines, pitting Hindus against Muslims. In 1921, an organization emerged in northern India called the Hindu Mahasabha.

It brought together people who opposed the secular outlook of the major political party at the time, the Indian National Congress, led by Mahatma Gandhi and others. The Mahasabha’s ideology espoused the education and uplift of Hindus and also the conversion of Muslims to Hinduism.

The ideology has its roots in the ideas of an important but controversial Indian nationalist, Vinayak Damodar Savarkar, who was not only ardently opposed to British rule in India, but advocated violence to end colonial domination and argued that India was the sole preserve of Hindus.

His ideas were fundamentally at odds with the principals of the Indian nationalist movement, Mahatma Gandhi and his disciple Jawaharlal Nehru, who would become the first prime minister of a free India. Gandhi, though deeply religious, had advocated Hindu-Muslim amity. Nehru, a staunch secularist, had supported religious pluralism. He died at the hands of a fanatic, Nathuram Godse, a member of the Hindu Mahasabha, in 1948.

Growth of the BJP

The Hindu nationalists sought to make Hinduism, an ancient religion which has no common holy text, no overarching set of beliefs and no single place of pilgrimage, into a homogeneous, organized faith based upon a set of common religious tenets.

During the early years of the Indian republic, following its independence from British colonial rule in 1947, the ideology of Hindutva and its adherents found little appeal among the Indian electorate. 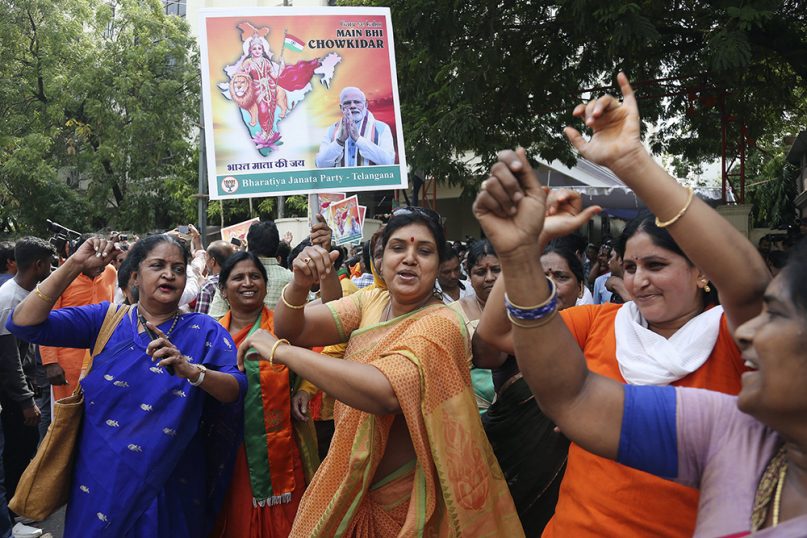 Supporters of India’s ruling Bharatiya Janata Party offer sweets to each other while celebrating early trends in counting for the general elections at the party office in Hyderabad, India, on May 23, 2019. BJP gained in strength since the 1990s. (AP Photo/Mahesh Kumar A.)

However, since the 1990s the BJP has gathered strength in both the electoral and social arenas. Electorally, it was in power as the dominant partner in a coalition regime from 1998 to 2004. Later, in 2014, it emerged as a majority party in Parliament.

It has also attracted substantial numbers of followers. In considerable part their disaffection stems from the willingness of secular governments to pander to the Muslim minority.

The Indian National Congress, on a number of occasions, especially in the 1980s, made a series of concessions to orthodox Muslim sentiment in its quest for their votes. Among other matters, a Congress government banned Salman Rushdie’s “The Satanic Verses,” even before Iran had issued the fatwa against Rushdie. On another occasion, it overturned an Indian Supreme Court judgment that had granted alimony to a Muslim woman. Members of the Muslims orthodoxy were outraged with the decision, as they deemed it to be an affront to their religious beliefs.

The BJP deftly dealt with the myriad concessions made to sectarian Muslim demands. They argued that the majority Hindu community was being short-changed and that only the BJP would adequately protect the interests of the majority Hindu population.

These sentiments, it appears, struck a resonant chord with significant segments of the electorate and played a not inconsiderable role in propelling the BJP to victory.

(Sumit Ganguly is a distinguished professor of political science and the Tagore Chair in Indian Cultures and Civilizations at Indiana University. This article is republished from The Conversation under a Creative Commons license. The views expressed in this commentary do not necessarily represent those of Religion News Service.)

News
Brandeis University stands by caste-bias ban despite pushback from Hindu activists
News
Hindu nationalists see Muslim jihad everywhere in India
Opinion
In the midst of deep grief, a scholar writes how Hindu rituals taught her to let go
Opinion
Why ‘namaste’ has become the perfect pandemic greeting
News
A Catholic priest takes on interfaith fight against COVID-19 in a sacred Hindu city
© Copyright 2020, Religion News Service. All rights reserved. Use of and/or registration on any portion of this site constitutes acceptance of our User Agreement and Privacy Policy, Privacy Statement and Cookie Notice. The material on this site may not be reproduced, distributed, transmitted, cached or otherwise used, except with the prior written permission of Religion News Service.