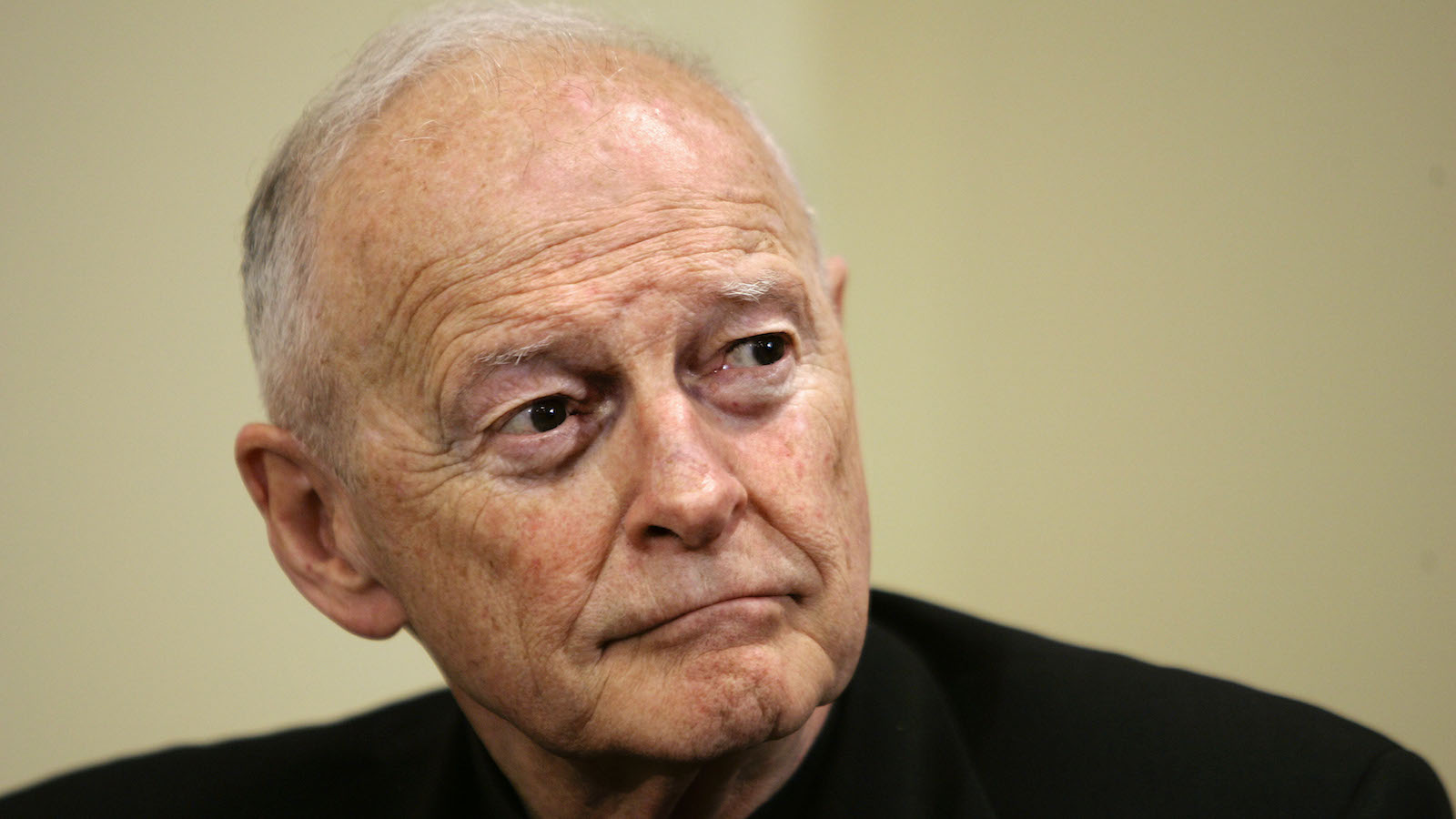 Former Cardinal Theodore McCarrick listens during a news conference in Washington in this May 16, 2006, file photo. (AP Photo/J. Scott Applewhite)
May 28, 2019
Jack Jenkins

(RNS) — A series of leaked emails has revived a long-simmering scandal involving defrocked Catholic Cardinal Theodore McCarrick, providing new evidence that the former archbishop of Washington, D.C., was disciplined after allegations of sexual misconduct but was nevertheless allowed to travel and work under both Pope Benedict XVI and Pope Francis.

The emails appear to confirm some of the claims made last year by Archbishop Carlo Maria Viganò, a former Vatican diplomat to the U.S., but do not appear to corroborate allegations that Pope Francis was aware of the restrictions placed on McCarrick after he was accused of sleeping with seminarians.

Last year, the pontiff took away McCarrick's rank of cardinal and banned him from ministry in the wake of a separate allegation that McCarrick abused a minor decades before. 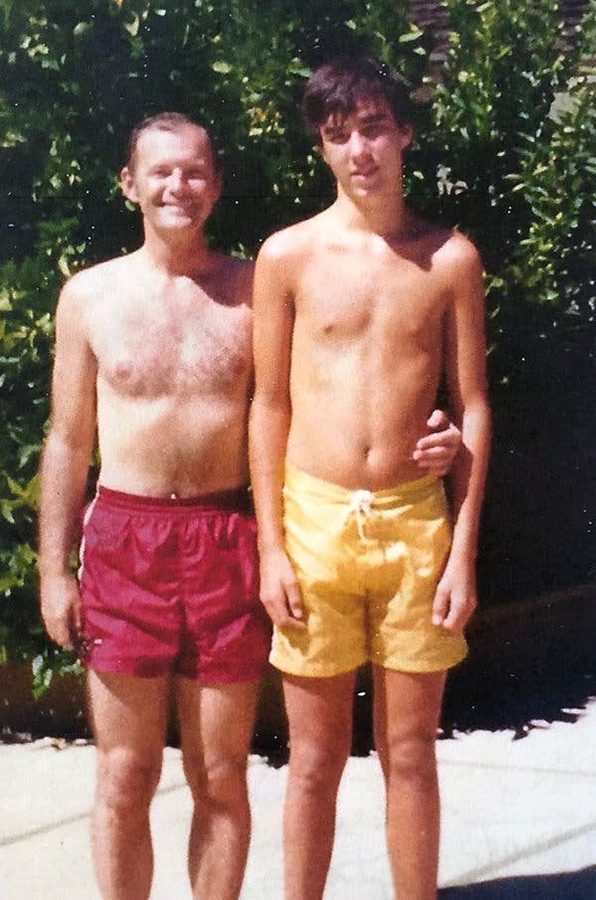 This 1974 photo provided by a man who agreed to be identified only by his first name, James, shows him in California with Theodore McCarrick, a Roman Catholic priest who eventually became a cardinal. James says he was sexually abused for about two decades by McCarrick, who was removed from public ministry in June 2018 over separate child abuse allegations. (Family photo via AP)

In one August 2008 message to Italian Archbishop Pietro Sambi, then the pope’s representative in the U.S., McCarrick said he was “ready to accept the Holy Father’s will in my regard.” He was referring a request from Italian Cardinal Giovanni Battista Re that McCarrick cancel his speaking engagements and move to a monastery. He contested the latter, suggesting that his sudden departure would cause “publicity,” which he said was “precisely what Cardinal Re is hoping to avoid.”

The documents are the latest salvo in what at least one expert described as an internal “fight” over what happened in Washington, with a bevy of leaks, letters and reports painting an increasingly convoluted picture of who knew what, and when. It also puts additional pressure on Pope Francis, whose papacy has come under fire after the resurgence of the Catholic sex abuse scandal over the past year and a half.

According to news first reported Tuesday (May 28) by the website Crux and by CBS News, Monsignor Anthony Figueiredo, a priest in Newark, N.J., who previously served as McCarrick’s secretary, revealed the letters and emails he said McCarrick wrote from 2008-2017. McCarrick served as Washington’s archbishop from 2001-2006.

The correspondence provided by Figueiredo, who also served as McCarrick’s “go-between” and aide during trips to Rome for years, includes McCarrick fervently denying some of the allegations against him.

“I have never had sexual relations with anyone,” McCarrick allegedly wrote in one letter to a senior Vatican official. McCarrick did, however, acknowledge that he shared his bed with seminarians, an act he called “an unfortunate lack of judgment."

“As the problems of sexual abuse began to surface, I realized this was imprudent and stupid and it stopped,” he wrote.

Other 2008 emails from McCarrick to Figueiredo — which Crux reportedly confirmed originated from McCarrick’s account — include him describing how Re told the archbishop to resign from all positions in Rome or with the U.S. Conference of Catholic Bishops, and barred him from making any public appearances without permission. 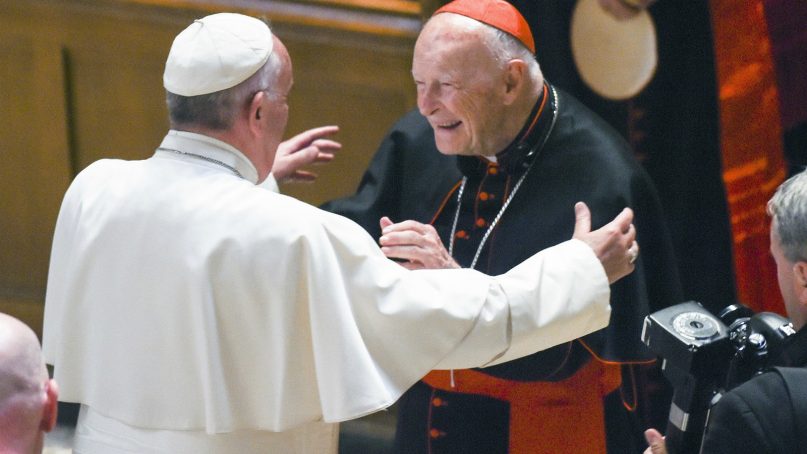 In this Sept. 23, 2015, file photo, Pope Francis reaches out to hug former Cardinal Archbishop emeritus Theodore McCarrick at the Cathedral of St. Matthew the Apostle in Washington. (Jonathan Newton/The Washington Post via AP)

But the documents suggest McCarrick began to defy prohibitions as time wore on, traveling to Rome (something he was also initially told not to do) on numerous occasions as well as countries around the world — particularly after the election of Pope Francis in 2013, when McCarrick traveled on behalf of the church.

Francis has repeatedly denied that he knew anything about the Washington cleric's situation before spring 2018, saying as much in a new interview published the same day as the documents.

“I said it many times, I knew nothing, no idea,” Francis told Mexican journalist Valentina Alazraki.

Massimo Faggioli, historian and theologian at Villanova University, said the documents do not indicate that Pope Francis was aware of the restrictions reportedly placed on McCarrick by Benedict.

Faggioli said Francis’ willingness to make bold public statements regarding the scandal stands in stark contrast to other Vatican officials involved. He pointed out that Pope Benedict published a lengthy letter last month addressing the uptick in the sex abuse crisis but has not as of yet spoken out about the McCarrick incident. Archbishop Donald Wuerl of Washington, left, chats with his predecessor, Cardinal Theodore McCarrick, before an ordination Mass at Washington's Basilica of the National Shrine of the Immaculate Conception in 2007. RNS photo by Jay Premack

The letters appear to suggest that Cardinal Donald Wuerl, who replaced McCarrick as archbishop of Washington, was involved in implementing restrictions against McCarrick, despite initially denying to the media that he knew about the abuse charges at all. (Wuerl later backtracked, calling it a “lapse in memory.”)

“What’s clear is that they are still fighting over Washington, D.C.,” Faggioli said. “The appointment of Wilton Gregory (who became archbishop of Washington earlier this month) has not put to rest the issue, because it seems to me they are still going after Cardinal Wuerl.”

Meanwhile, the Vatican continues to conduct its own investigation into the matter. But Faggioli suggested that any final report from the church is unlikely to be comprehensive and that the real power to investigate likely lies with American journalists.

“I would not expect the equivalent of the Mueller report on the McCarrick case,” he said.