(RNS) — After her unexpected death at age 37 at the beginning of May, Rachel Held Evans’ loved ones gathered Saturday (June 1) to remember her in a funeral service.

The service was held at First Centenary United Methodist Church in Chattanooga, Tenn. Many of the writer’s friends followed along from a livestream of the service hosted on her website.

During the service, twitter was filled with remembrances and outpourings of love for Held Evans under the hashtags #becauseofRHE and #rememberingRHE.

Held Evans’ casket, topped with a bouquet of yellow flowers, was carried up the aisle of the church at the beginning of the service, followed by her husband, Daniel Evans, and their two young children.

“She made me better than I was before I met her,” Daniel Evans wrote in a blog post on Thursday. “She left the world better than how she found it. For that I will always be grateful.”

The service was ecumenical but drew from the Episcopal Church’s funeral liturgy, Held Evans’ adopted church. 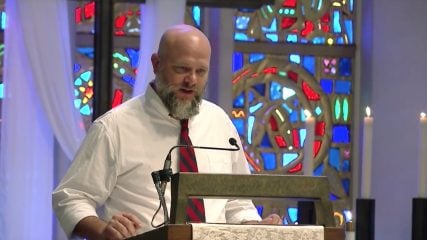 The Rev. Brian Ward delivers the eulogy at the funeral of Rachel Held Evans on June, 1, 2019, in Chattanooga, Tenn. Video screenshot

The funeral eulogy was delivered by Rev. Brian Ward, Held Evans’ youth pastor in high school, who knew her when she was “a goofy and brilliant teenager.”

Ward said that being her youth pastor was not easy because Held Evans was constantly asking questions and challenging him.

“She had zero tolerance for inauthenticity,” Ward said.

He praised Held Evans for her talent and her ability to explain faith so beautifully. He said instead of preaching here, he would rather be able to read her words and have her “tell us why in the world this happened.”

“She, like Jesus, was a revolutionary,” Ward said of Held Evans. He urged people to truly listen to what Held Evans had to say and to carry out her work of loving the marginalized and welcoming the stranger.

Amanda Held Opelt, Held Evans’ younger sister, spoke about what she was like as a sister. She said that Held Evans “made everyone feel like they belonged,” and wanted to be part of the Christian family even though it had sometimes hurt her.

Opelt sang a song that she had written about Held Evans before her death but never shared with her.

Chu led the prayers of the people, where he invoked the phrase that Held Evans had above the desk where she wrote, “tell the truth.” He urged the audience to tell the truth about God’s love in the world and strive to be women and men of valor.

Bessey, who tearfully read the resurrection story from the gospel of John, and Bolz-Weber both displayed the tattoos they got in advance of the service. Those tattoos read, “eshet chayil,” or “woman of valor,” in Hebrew, a phrase from the Bible that Held Evans popularized. The Rev. Nadia Bolz-Weber, a Lutheran priest, gives the benediction at the end of the funeral for her friend Rachel Held Evans. Video screenshot

“I assumed we would have a future where Rachel had raised her babies and kept writing books and grew old with Dan,” Bolz-Weber said in her sermon.

Though theologically she knows that death knows no sting, “it stings now,” Bolz-Weber said.

Bolz-Weber said that there was a part of her “that only Rachel seemed to see.”

She reminded the crowd that the last tweet before she died was about having to miss the HBO show “Game of Thrones” and said that she was thinking of her during the finale when character Tyrion Lannister said  “there’s nothing in the world more powerful than a good story.”

“This is not the end of the story,” Bolz-Weber said.

She said that the love Held Evans had for the world continues to go on and that the promise of resurrection is greater than the grief of the tomb.

Before Held Evans’ casket was carried out of the church and the service ended with the hymn “It Is Well with My Soul,” Bolz-Weber read a benediction that included a quote from Held Evans herself:

“Jesus invites us into a story bigger than ourselves and our imaginations… may we never lose our love for telling the story.” 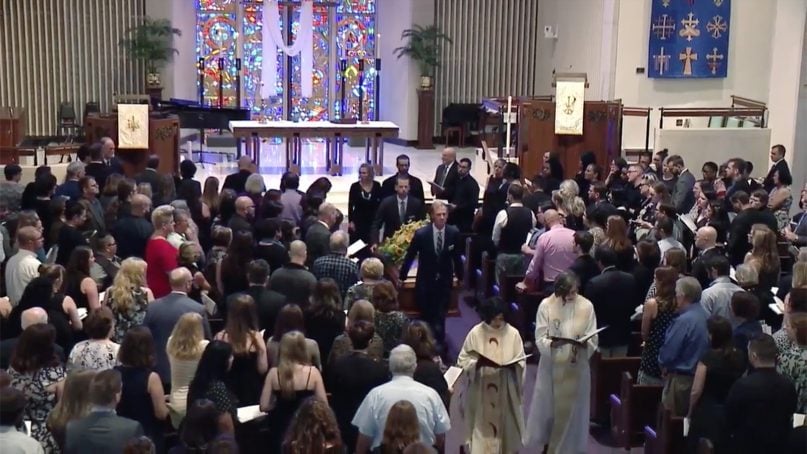 The coffin is taken out following the funeral of Rachel Held Evans at First Centenary United Methodist Church in Chattanooga, Tenn., on June 1, 2019. Video screenshot