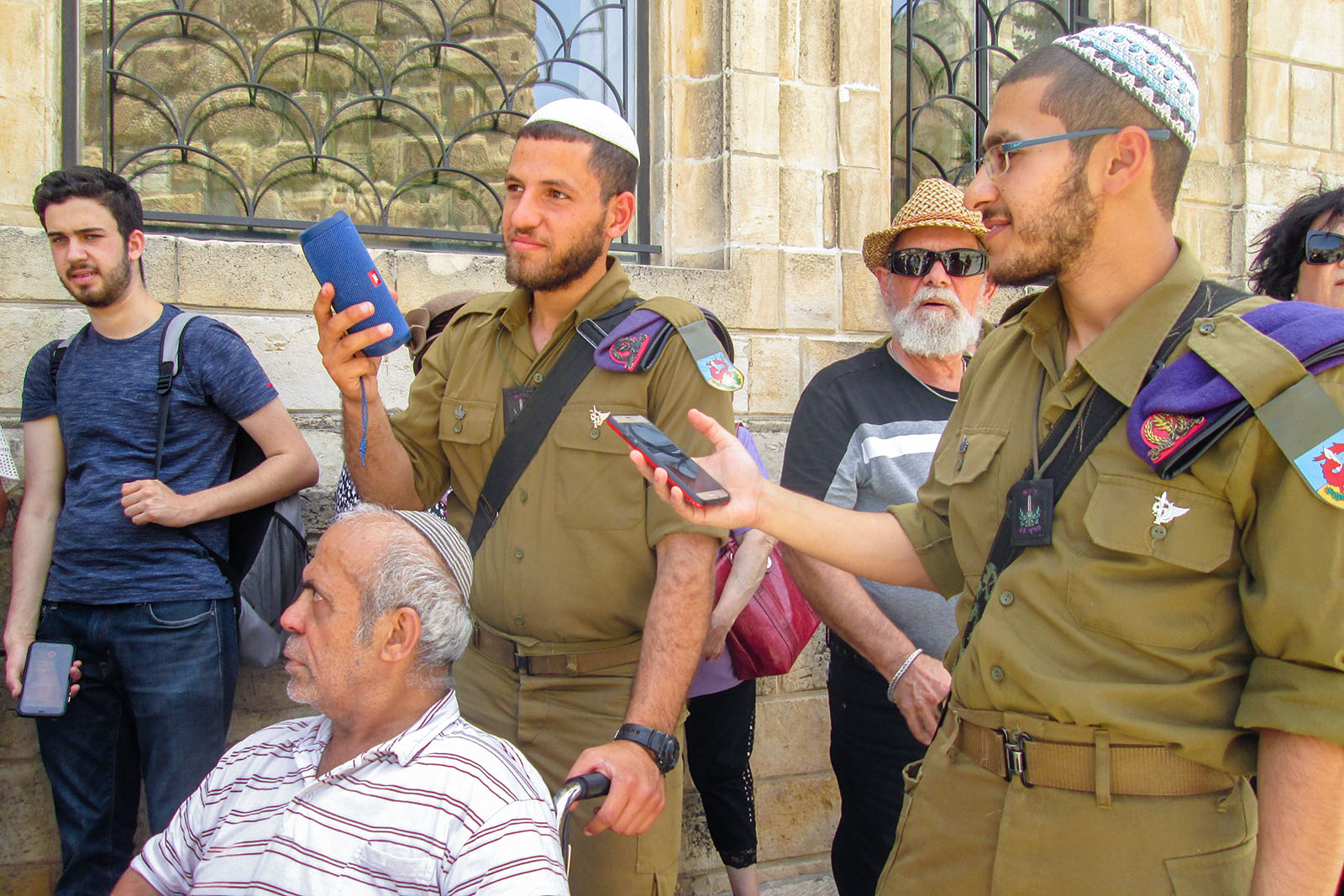 An Israeli soldier accompanies a group of visually impaired Israelis while holding up a speaker broadcasting a new app-based audio tour of the Old City of Jerusalem. RNS photo by Michele Chabin
June 11, 2019
Michele Chabin

JERUSALEM (RNS) — Refuit Golan had visited the Old City of Jerusalem before, but it wasn't until she toured the ancient site while listening to a voice-guided tour for the visually impaired that she fully began to appreciate its history and significance.

“When you can’t see well, one stone is just like any other stone,” said Golan as she and two dozen other visually impaired Israelis meandered through the Old City’s warrenlike alleyways alongside several sighted companions with the help of a new app.

The tour, which Golan had downloaded on her cellphone and listened to on a small portable speaker, provided the kind of tidbits a tour guide would deliver, but added details and descriptions that a blind person would otherwise miss out on. 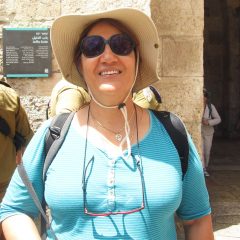 Refuit Golan poses for a photograph in the Old City of Jerusalem. Golan had visited the Old City several times, but it wasn't until she toured the ancient site while listening to a voice-guided tour for the visually impaired that she fully began to appreciate its history and significance. RNS photo by Michele Chabin

Funded by city and Israeli agencies along with advocacy groups, the app was created by the Center for the Blind in Israel and is available for iPhones and Android devices in English, Russian, Arabic and Hebrew. It is part of an ambitious initiative to make the Old City, home to some of the world’s holiest sites, accessible to people with a wide range of disabilities.

Transforming the Old City into a more disability-friendly site “is holy work,” Jerusalem Mayor Moshe Lion said during a June 3 event to kick off the app. “Jerusalem is leading the way for ancient cities around the world.”

The Old City, surrounded by 500-year-old walls, resembles a labyrinth. Thousands of stone steps lead to four distinct ethnic quarters, a colorful Middle Eastern market, archaeological excavations and holy sites, including the Western Wall, the Church of the Holy Sepulchre and the Al-Aqsa Mosque atop the Temple Mount. Millions of people visit every year. 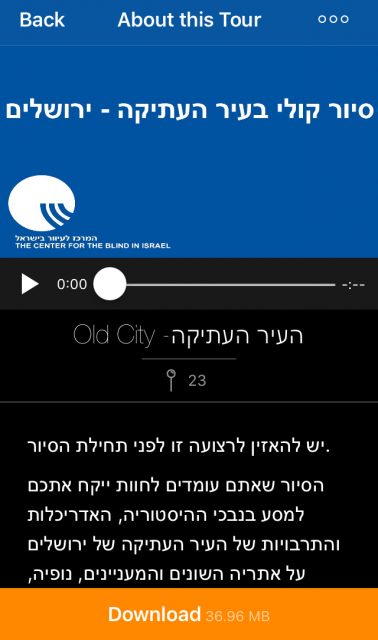 In recent months, handrails have been installed and ancient streets that function as pedestrian walkways through the oldest parts of the city have been reworked to make them wheelchair- and stroller-accessible.

In addition to three-dimensional maps on various walls along main thoroughfares, the East Jerusalem Development Co., which represents the city and national governments, has created a printed accessibility orientation map and a GPS-based app in eight languages that provides real-time navigation between the alleys and sites.

The city is catching up with tourist sites that have been adapting to people with disabilities for years.

The Tower of David Museum, housed in a medieval citadel within the Old City’s Jaffa Gate, launched its accessibility initiative three years ago.

In addition to installing wheelchair ramps, the museum created programs for children with various disabilities.

“If you have a child with special needs, the hustle and bustle of regular museum hours can be too imposing,” said Caroline Shapiro, the museum’s director of international relations.

Guides have been trained to provide tours to visually impaired visitors and to communicate with deaf and hard-of-hearing visitors using intermediate-level sign language.

The museum encourages touch. Visitors can explore the different surfaces of the stones, from the enormous blocks from King Herod’s time to the rougher stones from the Crusaders’ time period and onward. The museum also has touchable models of ancient Jerusalem. 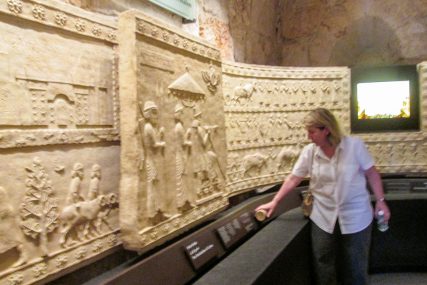 A woman tours the Tower of David in the Old City of Jerusalem. The Old City has special tours for the visually impaired that emphasize touch. Participants can explore panels, stones and tactile maps with their hands. RNS photo by Michele Chabin

It was created in partnership with the Central Library for the Blind and Visually Impaired.

“We know that Jerusalem is so important to people all over the world, and not just Jewish people," said Eilat Lieber, the museum’s director. “This is a city of pilgrims. Our mission is to be open to and inclusive of everyone.”

The challenge, Lieber said, is finding a way to make public spaces accessible while preserving the Old City’s character and antiquities. As a World Heritage Site, the Old City is subject to special preservation rules.

“Archaeologists believe the best way to preserve artifacts is to keep people away from them, but in reality the most protected sites are the ones that people visit most,” thanks to greater funding and supervision, Lieber noted.

Itzik Sabato, director of the Social Development Fund of Israel’s Social Security Institute, said everyone involved in developing the touring app, from the technicians to the focus group participants, considered it a holy mission.

“This is a place that belongs to every one of us, regardless of your religion or where you come from. We asked ourselves, how can we enable people to visualize the richness of the history of Jerusalem, the emotion, the enthusiasm, if they can’t see it with their own eyes?”

Zimra Alperin, chairwoman of Sheshet, an association for the blind in the southern city of Beersheva, traveled to Jerusalem to try out the app before recommending it to others.

“When you’re blind, you want to feel things with your own hands,” she said as she listened to the app on her way to the Jewish Quarter.

“In the past, I walked through here with my family but never absorbed anything. Today I had the chance to learn about the area. It was maxim — terrific.”