(RNS) — The Family Research Council is well-known for its discriminatory views and actions against the LGBTQ and Muslim communities and misusing religious freedom as a license to discriminate. Its views are so harmful that it’s been deemed a hate group by the Southern Poverty Law Center, which monitors hate groups and other extremists throughout the country.

Yet, the organization’s leader, Tony Perkins, was recently elected chair of the U.S. Commission on International Religious Freedom.

He has no place on a commission designed to protect religious freedom at home or abroad.

Perkins has built his career on spreading alarmist and exclusionary rhetoric against vulnerable communities. In a recent piece for Religion News Service, he seems to claim that his position as the “head of a Christian organization” excuses his actions and rhetoric.

RELATED: Why Christians must support religious freedom for everyone

He asserts in the same article that his organization is merely engaged in “advocating on behalf of Christians when their ability to freely practice their faith is inhibited by bad government policies or social pressure.” 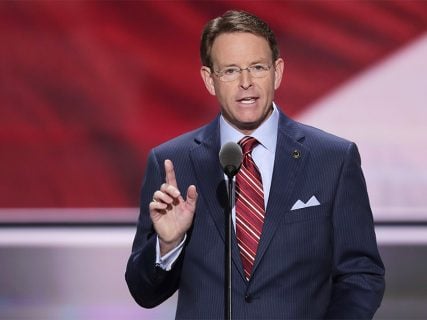 Tony Perkins, president of the Family Research Council, speaks during the final day of the Republican National Convention in Cleveland on July 21, 2016. (AP Photo/J. Scott Applewhite)

What Perkins calls “bad government policies or social pressure” is really a cultural shift toward acceptance of marginalized communities and civil rights legislation that further protects the most vulnerable.

It’s also important to note that while taking up USCIRF’s chair, Perkins remains president of the FRC. Days after his selection as chair of a commission tasked with protecting religious liberty, the FRC sent out an email in Perkins’ name emphasizing how its “influence is being felt in Washington, D.C. and across our nation.”

While already serving as chair of a commission tasked with calling out the persecution of gay men by governments acting at the behest of conservative religious authorities, he has signed FRC emails promoting “Biblical masculinity.”

How can Perkins be trusted to stand against religious persecution at a time when people in this country and around the world are being killed because of their faith, while still working for an organization that devalues the realities of persecution by continually asserting that evangelical Christians are “under attack” in this country?

As this White House continues to carry the baton for the religious right – which many now consider intertwined with white Christian nationalism — the administration is standing alongside hatemongers and bigots. The version of religious liberty it seeks to enshrine privileges one brand of religion over all others.

Instead of accepting this twisted definition of religious freedom, Americans ought to see Tony Perkins for who he is: a right-wing figure who has dedicated his life to pushing for the legalization of discrimination – particularly against the LGBTQ community.

Congress ought to reverse Perkins’ appointment. Anything less is an affront to the Constitution, damaging the separation between religion and government at the expense of both.

(Rabbi Jack Moline is president of Interfaith Alliance. The views expressed in this commentary do not necessarily reflect those of the Religion News Service.)

Religion Hub
Wyoming librarians under fire for books about sex, LGBTQ
Follow us on Facebook!
Submit your photos to RNS